The small town got relocated not once, not twice, but three separate times!

Dillon, Colorado, is the perfect place if you're looking for a getaway, no matter the time of year. It's located about 70 miles west of Denver, along I-70, and is nestled fairly close to six major ski resorts, including Keystone, Arapahoe Basin, Breckenridge, Copper Mountain, Vail, and Beaver Creek. The picturesque views along the Dillon Reservoir, which is a popular stop for fishing, sailing, hiking, and more, will make you never want to leave.

Dillon has also made quite a name for itself as of late with the popular Ice Castles attraction, which is, unfortunately, closed for the season.

But what many may not know about the town is that it's had quite an interesting history, specifically with being relocated. In fact, the town has moved a total of three times since its inception in 1883. Named after prospector Tom Dillon, the town was originally built as a trading post in the 1880s and was located on the northeast side of what was then known as the Blue River Valley.

Town of Dillon before the dam | Courtesy of Dillon Church

However, when the Denver and Rio Grande Railroad expanded into the area, it completely bypassed the town, and not wanting to miss out on the chance for growth, Dillon was relocated to the western side of the Blue River. But this first move didn't last long, as a second railroad was constructed. So, the town's site moved again. Established in 1892, the second site was located at the junction of the Blue River, Snake River, and Tenmile Creek. This allowed the town to have one train station for both rails -- a win-win.

Fast-forward to the 1900s. In need of a way to meet the ever-growing needs of the community, the Denver Water Board decided to dam the Blue River and have the water diverted to Denver. The board began to buy land in the area, specifically, a hillside that would then become the shore of the Dillon Reservoir, aka Lake Dillon -- 172 acres had also been set aside to relocate residents, businesses, and the town cemetery. During the Great Depression, many residents were tight on money and unable to pay property taxes, so they sold their property to Denver Water for back taxes.

Come 1956, any remaining residents were forced out of the town, being told that they had to sell and vacate by September of 1961. Then, on September 15, 1961, the process to move Dillon (for the third and final time) began.

The catch was that if people wanted to move from the old site to the new one, they were responsible for paying for the cost of transporting the buildings. So, due to this, many didn't pay to have their homes moved and instead rebuilt them, or they simply moved away altogether. At least 10 homes, along with the Dillon Community Church, Town Hall, and the Arapaho Café and Motel, were uprooted and transported to the new site, with many still standing today. 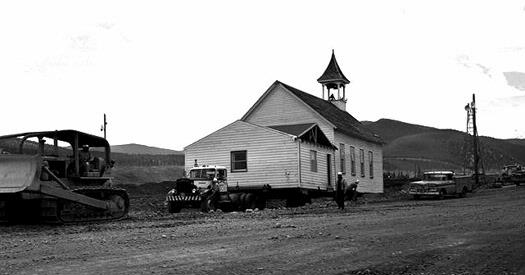 Several other businesses were moved, but ended up going to neighboring towns. For instance, The Mint Bar got moved to what we now know as Silverthorne, the Hamilton-Dillon Hotel went to Breckenridge, and the Antler's Café is now in Frisco.

Any remaining buildings were demolished and the Dillon Reservoir was built. So, the old site is now submerged beneath 250 feet of water. Pretty crazy, right?

What are your thoughts? Sound off in the comments below.