Three of the original Super Soakers will hit shelves this spring!

We all know that the '90s were all that and a bag of chips, so we just can’t get enough of all the relaunches and sentimental products from our youth that are making a comeback.

For those of you who have never felt the satisfaction of emptying an entire Super Soaker on your brother (with or without the element of surprise), you'll now get a second chance to achieve that childhood dream. Nerf has announced that the classic Super Soaker will be back on store shelves, just in time for summertime fun.

According to the press release, all three Super Soakers will be available in Spring 2020. 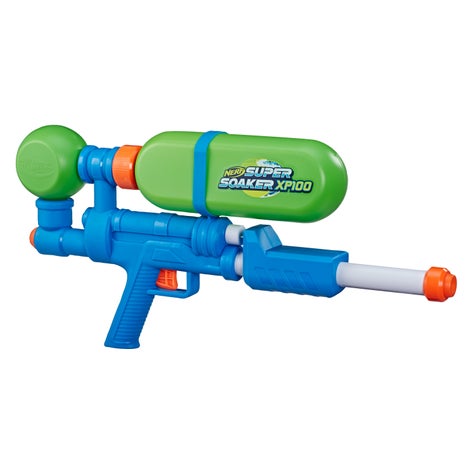 While they will be very reminiscent of the original designs, these updated models will have different colors and slightly modified features, including a sturdier plastic, to make them less prone to breakage, like the older models. (A well-learned tip: leaving them out in the sun weakens the plastic, the originals often got fragile and cracked after being left to bake in the hot sun.)

Super Soakers first hit the toy scene in 1990, but it went by a different name then; the Power Drencher. Invented by NASA engineer Lonnie Johnson in 1982, the idea of a pressurized water blaster was not a big hit with toy companies at first. After years of trying, Johnson secured a partnership with the now-retired toy company Larami. In 1991, it changed its name to Super Soaker, and has sold millions of units, won numerous awards, and been inducted into the National Toy Hall of Fame.

Larami closed down in 2002 and eventually sold the Super Soaker brand to Hasbro. Super Soaker then merged with the Nerf in 2010 and started being marketed as a Nerf Soaker.

All we know is, this is pretty fly news for all of us, '90s kids or not. Super Soakers are just some of many '90s fads that have made a comeback, from Dunakroos and Mall Madness to fanny packs and crop tops.

What do you think about all this love for the '90s we have been seeing lately? Are you in on the nostalgia game? What is your favorite '90’s relaunch that you've seen so far? Share your thoughts with us in the comments!