Vermont Chicken Hatches and Continues to Raise a Duckling

Vermont Chicken Hatches and Continues to Raise a Duckling

The old-age conundrum of "chicken-and-egg" is taken to a whole new level.

Looking for a new hobby back in April when the pandemic was just getting started, a young Vermont couple purchased some ducks to raise as pets. With plenty of room on their land, they acquired a flock of Silkie chickens from a friend a few months after that. Sometime later they noticed a duck egg (larger than chicken eggs) was in the coop with the Silkies. Not only that, but a Mama Hen was sitting on it.

In an interview with WCAX  the owner, Courtney Sugarman, said, "I didn’t think anything would happen with it, so we just kind of let her be." Then, two weeks later the chicken laid her own eggs. Courtney and her husband Caleb numbered the eggs with a marker to keep track of them all and then—lo' and behold—the duckling hatched right along with the chicks!

Because it's winter, the mother hen, baby chicks, plus the surprise duckling are staying in a pen inside the Sugarman's home. The duck doesn't seem to notice and cavorts with its chicken siblings as though nothing was amiss. It's already a couple of weeks old and much bigger than the rest of its brother and sister chickens so it tends to win if there are any fights over food. "It still tries to climb under the mom almost every night,” Caleb said. 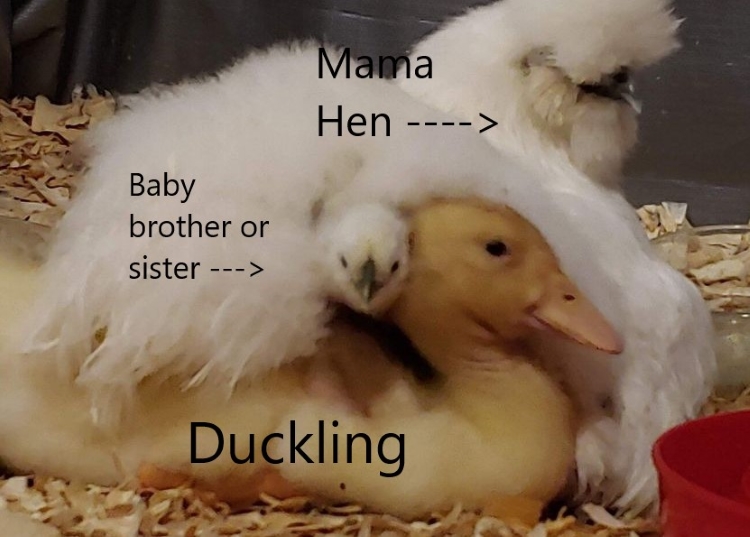 Courtesy of Courtney Surgarman (cropped and labeled by Mike Burnette)

The plan is to release the duck outside once it turns spring even though it "freaks out" around the water. Vermont State veterinarian Kristin Haas' opinion, however, is that the "duck’s instinct would override other things over time,” explaining that “Ducks need water in a different way than chickens to keep their feathers waterproof and they use water when they’re eating.” So, assuming the duckling isn't spoiled by living indoors and winning all of the food fights, it should adjust fine.

The mystery of how the duck egg got into the chicken coop is still unsolved. We'd love to hear your theory in the comments.