There are a lot of people who like to complain that cars don't have names anymore, but that's because they're probably just shopping the German varieties, and I can't blame them. I'm half-convinced that the good people at BMW, Mercedes-Benz, and Audi decide to name their cars by mixing lottery balls with a bag of scrabble letters. Regardless, if you're shopping for a car, you have a lot of numbers and letters to keep track of. Of those, some of the most important are "AWD" and "4x4"—which you, as a well-informed consumer, know what they stand for. But do you know what the difference between 4-wheel-drive and all-wheel-drive is?

Let's start with 4-wheel-drive, the older of two.

So where's the difference? For your average consumer, it's whether or not you want to press a button when it snows. But for the car guy or gal, it's about your intended application. Typically, 4-wheel-drive vehicles offer two things that all-wheel-drive vehicles don't. The first is that they're built to withstand punishment off-road and that means stronger axels, more suspension flex, and beefier differentials. The second is gearing. Four-wheel-drive vehicles often times offer a 4-high and 4-low setting. When you engage 4-low, you're telling the transfer case to apply as much torque as the gearing will allow to the wheels. This is helpful if you're trying to climb or descend an extremely steep grade or crawl over a massive rock. 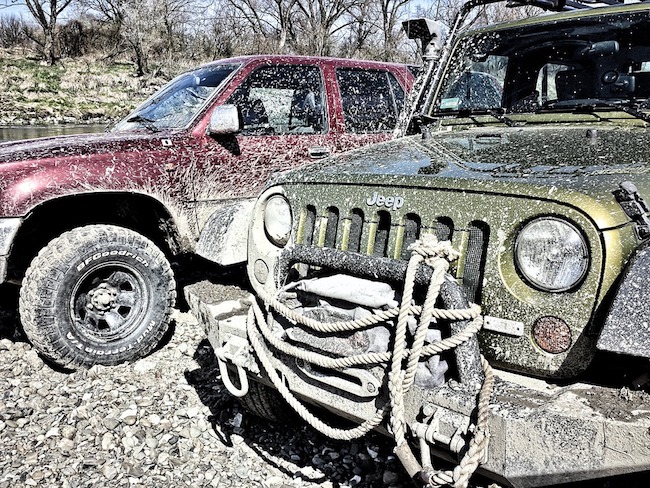 Don't go over 20 mph, though, or you could damage your vehicle. The best way to think about it is if you were going to start pedaling a bicycle up a steep hill, you pedal in the lowest gear possible to get going.

Then there's all-wheel-drive, and all-wheel-drive excels in two major ways. The first is that all-wheel-drive vehicles have better road manners and are typically designed to handle snow or very light (think dirt road) off-road use. The other way is performance. Automakers implement technology that allows cars to send power to either the front, rear, or side of a car. This helps with cornering and maintaining traction if your vehicle's engine produces a lot of horsepower.

So, I guess the difference all depends on what you intend to use your vehicle for. Stay tuned for more on deciphering the alphabet on the back of your car.

Want to hear more about what's going on in Colorado? Check out these great AWD vehicles to pick up used!

Watch Out for the 'Dog-Sized' Lizards Invading Southeastern States

Another Mysterious Monolith Appears in Romania Then Disappears Just as Quickly

Miss the Office Noise and Ambience? Re-Create It With This Clever Noise Generator