A surplus of sweet Texas crude and major advances in engine technology means truck manufacturers are duking it out where it matters most – brute power. Chevrolet just announced that the 2020 Silverado HD will feature an all-new 6.6L gas-powered V8, prompting Ford to disclose that the new Ford Super Duty won't have a puny 6-point-something-engine, but instead a massive 7.3-Liter gas-powered V8 plant. For you old school types, that's 445 cubic inches, and the only current production vehicle to offer a bigger engine is the $3 million Bugatti Chiron, which offers an 8-Liter W12.

Ford hasn't divulged the exact figures yet, but if we had to bet, it's probably going to offer more than the 401-horsepower, 464-lb-ft of torque that the Silverado offers. After all, Ford is claiming that the new engine will be "the most powerful gas V8 in its class", and with that much displacement, we have no reason to think that their claims are inaccurate.

But discerning truck buyers know that all that grunt doesn't mean anything unless you can get that power to the ground. That's why Ford also noted that they will be replacing the current six-speed automatic transmissions currently available in their Super Duty lineup with a new 10-speed "TorqShift" transmission. 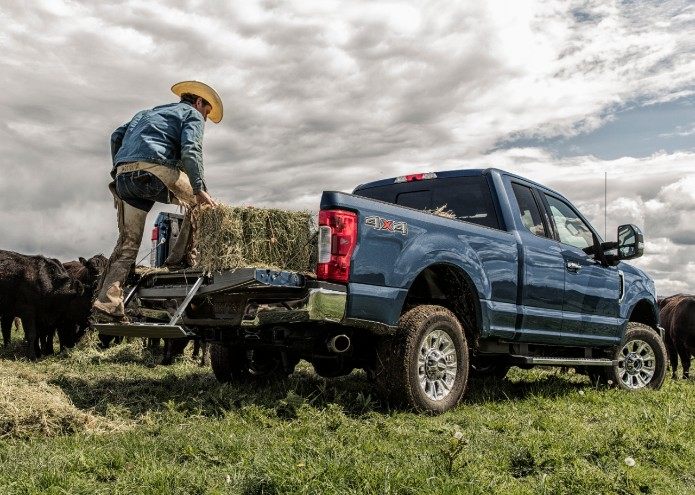 “Super Duty customers have demanding and diverse needs – from towing heavy trailers to repairing critical infrastructure,” Kumar Galhotra, Ford president, said in a press release. He then added, "their truck is their biggest" tool so it's important to offer more capability than ever.

All we know is that, if the new Super Duty is anything like the F-150 – the current leader of the full-size segment – then all of this should translate into road-going prowess, especially since Ford has decided to focus solely on their lineup of trucks and crossovers.

What are your thoughts? Do you have a Ford truck? Do you like it? If so, let us know why in the comments below!

Did you hear that this major chain is doing $1 hurricanes all February long?