If you can get to the end without a tear in your eye, you might be a robot.

Yes, it's true: Even presidents love their mommies. Just in time for Mother's Day, learn how these 13 United States presidents felt about Mother Dearest. We even have pictures to put with the quotes—can you see the resemblances in their famous progenies? (Check out Lincoln's mom—she was a fox)! From Washington to Biden, let's get started.

1. “My mother was the most beautiful woman I ever saw. All I am I owe to my mother. I attribute my success in life to the moral, intellectual, and physical education I received from her.” –George Washington (Mary Ball Washington) 2. "Motherhood is the keystone of the arch of matrimonial happiness." –Thomas Jefferson (Jane Randolph Jefferson) 3. "There never was a woman like her. She was gentle as a dove and brave as a lioness ... The memory of my mother and her teachings were, after all, the only capital I had to start life with, and on that capital I have made my way." –Andrew Jackson (Rebecca Jackson) 4. "My mother was an angel upon earth. She was a minister of blessing to all human beings within her sphere of action. Her heart was the abode of heavenly purity. She had no feelings but of kindness and beneficence; yet her mind was as firm as her temper was mild and gentle. She had known sorrow, but her sorrow was silent. She was acquainted with grief, but it was deposited in her own bosom. She was the real personification of female virtue, of piety, of charity, of ever active and never intermitting benevolence." –John Quincy Adams (Abigail Adams) 5. "All that I am, or hope to be, I owe to my angel mother." –Abraham Lincoln (Nancy Hanks Lincoln) 6. "My mother, Martha Bulloch, was a sweet, gracious, beautiful Southern woman, a delightful companion and beloved by everybody." –Teddy Roosevelt (Martha Bulloch Roosevelt)

7. "Mothers all want their sons to grow up to be president, but they don't want them to become politicians in the process." –John F. Kennedy (Rose Fitzgerald Kennedy) 8. "This is a moment that I deeply wish my parents could have lived to share. My father would have enjoyed what you have so generously said of me—and my mother would have believed it." –Lyndon B. Johnson (Rebekah Baines) 9. "From my mother I learned the value of prayer, how to have dreams and believe I could make them come true." –Ronald Reagan (Nelle Wilson Reagan) 10. "The bond between mothers and their children is one defined by love. As a mother's prayers for her children are unending, so are the wisdom, grace, and strength they provide to their children." –George W. Bush (Barbara Pierce Bush) 11. "Mothers are the rocks of our families and a foundation in our communities. In gratitude for their generous love, patient counsel, and lifelong support, let us pay respect to the women who carry out the hard work of motherhood with skill and grace, and let us remember those mothers who, though no longer with us, inspire us still." –Barack Obama (Ann Dunham) 12. "My mother was one of the greatest people I've known in my life." –Donald Trump (Mary Anne MacLeod Trump) 13. "She believed in us, so we believed in ourselves. How could we do less? When we triumphed she was quick to remind us it was because of others. There's no one better than you, every man's your equal and every man deserves respect." –Joe Biden (Catherine Jean Finnegan Biden) 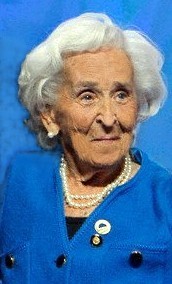 So now that you know what mushy-gushy quotes about moms these 13 presidents came up with, go on and shower Mom with some of your own! I'm not sure anyone can outdo John Quincy Adams, though (wish he were MY son).

Are you going to be with your mom on Mother's Day? Tell us about it in the comments! (Word to your mother).