Strap in for a story about one of Colorado’s most haunted locations!

Steven and Beth Lee and their two boys were a normal, happy family. In 1990, they moved into what was supposed to be their dream home in the beautiful Black Forest region of Colorado Springs. After years of renting homes around the area, they finally found a beautiful, spacious, two-story log home off Swan Road in the densest part of the woods. It was everything they wanted and more. They leased the home, and a year later, decided to purchase the five-acre parcel … that’s when the problems began.

The unsuspecting Lees were not told by the previous owner that he was convinced the house was haunted—not out of malice, mind you, but of fear that he would be ridiculed. Within weeks of purchasing the home, all hell broke loose, literally. 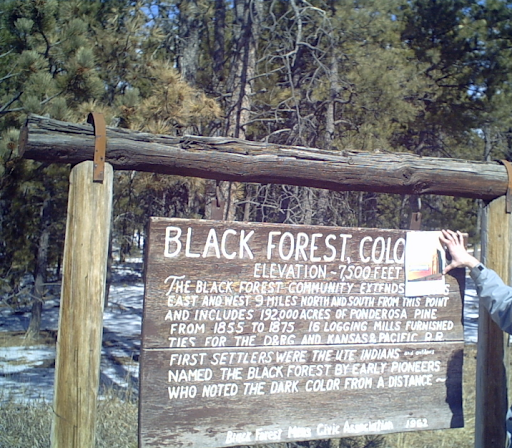 "One day we came home," remembers Beth, "and it was like the Fourth of July in our living room and bedroom. We had all kinds of lights flashing through, and it sounded like people stomping across the roof. We would lay in bed at night and hear chains rattling. One night we woke up and heard orchestra music. Strange things started happening every day."

The horrors didn’t stop at sounds and flashing lights either.

The two Lee boys consistently reported seeing weird lights and shadows in their rooms, and lights and appliances would turn on and off by themselves. One of the strangest phenomenons was the untraceable chemical odors that burned the family members’ eyes and throats. Steven Lee, in true dad-in-a-horror-movie fashion, didn’t believe the activity was paranormal. He suspected that someone was trying to scare the family out of their new home. So, he installed a state-of-the-art security system, complete with video surveillance and motion detectors. The systems would often get set off with no one around to trigger them.

Over the next four years of living there, the family had 62 unexplained “break-ins.” Not to mention, the El Paso County Sheriff’s Department opened an investigation in 1993, and conducted 45 followups, but never found any criminal goings-on. The family drained their funds trying to “catch” whoever was causing the activity.

Through the captured footage of Steve's security system, odd occurrences like light streaks, strange shadows, and even haunting translucent faces can be found. After buying or renting every camera he could, Steve finally admitted that something paranormal was going on in his home. The “hotbed” spots included a wall next to their satellite dish, the living room, and master bedroom.

In desperate need of answers, the couple called upon the television show Sightings in 1995. The crew brought in a psychic “ghostbuster” who quickly identified a threatening male spirit in the living room and at least 20 more spirits. She judged the level of otherworldly activity in the house as “monumental.” During the filming of a discussion with the psychic and the Lees at the kitchen table, Beth felt as though someone was holding her down. Suddenly, a member of the crew, felt “something go into her,” and her chest, arms, and legs became numb—she wasn't able to feel normal until she was far away from the home.

The crew returned six months later with another renowned psychic, Peter James, who immediately felt a pull of powerful psychic energy on the property. While touring the house, James was overwhelmed by the burning chemical odor mentioned earlier, and suddenly asked if the name “Howard” meant anything to the family. Steve and Beth were taken aback and the familiar name of their dear friend who Beth called their “adopted granddaddy for the last 10 years.” As they revealed more about the old friend, the chemical smell began to make sense. Turns out, Howard’s son, Howard Jr., died of a drug overdose in the 60s. The youth's best friend was a pharmacist and would sneak the two drugs to get high together. James felt that Howard Jr. entered a “rift in space-time” on the Lee's property because he wanted to somehow contact his father.

Steve had to take a moment to compose himself saying, “There’s no way on God’s earth he could have known about Howard.”

The house has been visited by several psychics and paranormal experts who unanimously agree the Black Forest House is one of the few locations on this planet that connects our world to the next. The closet in the master bedroom is suspected to be a portal to the “other side,” and the 100-year-old mirror in the room was an endless source of photographs of apparitions and floating faces.

A Hopi shaman consulted on the Black Forest hauntings, reporting that the area is a “Rainbow Vortex.” Currently, there are only two other locations where photographic phenomena similar to those from the Black Forest are being recorded (in London and Arizona). Today, at the Lee house, doors open and close by themselves, appliances turn on and off, objects disappear or are hidden, alarms go off for no reason, and shadowy figures and disembodied voices can be seen and heard. Red, yellow, and white light forms can be seen, as well as apparitions of an old lady, a little girl, a burly man in 1800s-style clothing, and a “flying dog,” not to mention the hundreds of faces photographed in the bedroom mirror. The Lee family still lives in the house to this day.

For all you thrill-seekers, I WOULD NOT suggest visiting this house, no matter how tempting. As I said before, the house is surrounded by surveillance cameras and silent alarms.

For your safety, I wouldn’t suggest tracking down the house. I do, however, encourage doing more research on it if you find it as fascinatingly creepy as I do!

Leave your thoughts in the comments below.