The odd broken bottle unearthed in 2016 may actually be an example of a “witch bottle,” an unusual find in the U.S.

In 2016, Interstate 64 near Williamsburg was due to be widened. The College of William & Mary sent an archeological team to unearth the remains of a Civil War encampment called Redoubt 9—which happened to be in the interstate median—before construction could begin. They found an old brick hearth, various pieces of dinnerware, and an old glass bottle full of nails.

The bottle is blue glass, and it was manufactured in Pennsylvania between 1840 and 1860, according to markings on the bottle. The body of the bottle was filled with various nails that had fused together over the years. The neck of the bottle cracked, so it was not immediately clear if moisture had gotten in to fuse the nails together or if there had been something else in the bottle with them. The original theory was that the bottle was simply a makeshift nail holder that was forgotten and buried with the rest of the site. A new theory, announced recently, is that it is instead one of the very few American examples of a phenomenon called a “witch bottle.” 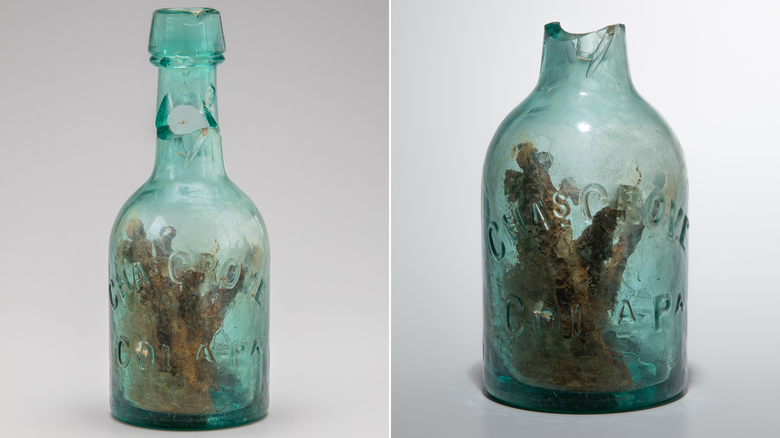 Witch bottles are a tradition that originated in England during a witch panic in the 1600s as a means to ward off evil spirits and curses. They were traditionally filled with both sharp objects (like nails, pins, glass shards, or hooks) and biological matter (like hair, fingernail clippings, teeth, or even urine). The biological matter was thought to draw in the evil spirits, and the sharp materials would trap them. Witch bottles were often buried near hearths where the heat of the hearth would warm them and make the metal “trap” more effective.

The remains of Redoubt 9 were in a highway median in 2016, but during the Civil War, they were part of a line of fortifications around Fort Magruder that were built by the Confederacy but occupied by the Union after taking Williamsburg. These fortifications had to be defended and occasionally rebuilt, so the original theory that the jug was just a convenient nail holder made sense. However, the location of the jug near the hearth speaks to the strong possibility that it was a talisman against a threat.

As Joe Jones, director of the William & Mary Center for Archaeological Research, explained:

“Perhaps the nails in the bottle were put there not by enlisted men using the bottle as an expedient container, but instead by an officer who felt especially threatened occupying hostile territory. Given the perceived threat of Confederate attack and general hostility of local residents, he had good reason to pull all the stops and rely on folk traditions from his community in Pennsylvania to help protect his temporary home away from home.”

The bottle found under the I-64 median did not have any remaining biological matter, but the broken neck of the bottle means that there could have been and it evaporated. The state of the bottle as it was found, means that there is no way of knowing if it actually was a witch bottle, or if it simply was a handy way to store nails as they worked. While witch bottle examples are very common in England, fewer than a dozen witch bottles have been found in the US.

Do you think this is an example of a witch bottle or just an old hunk of junk? Let us know in the comments.