From the Brown Palace to the Broadmoor, share a room with things that go bump in the night in some of the state’s bigger bergs.

This state is no stranger to the supernatural. You can tour to real haunted houses, take haunted hikes, and even stay in a haunted hotel. The quickest way to get your ghost on is to fork over some dough and sleep where the spirits roam. Check out our list of haunted hotels that you, too, can spend a night in*. We just can’t guarantee you will check out.

*Please note: Being included on this list does not mean we endorse or vouch for the hotel. We can’t guarantee the state of the rooms, the living staff, or the non-alive former guests in any of these haunted hot spots.* 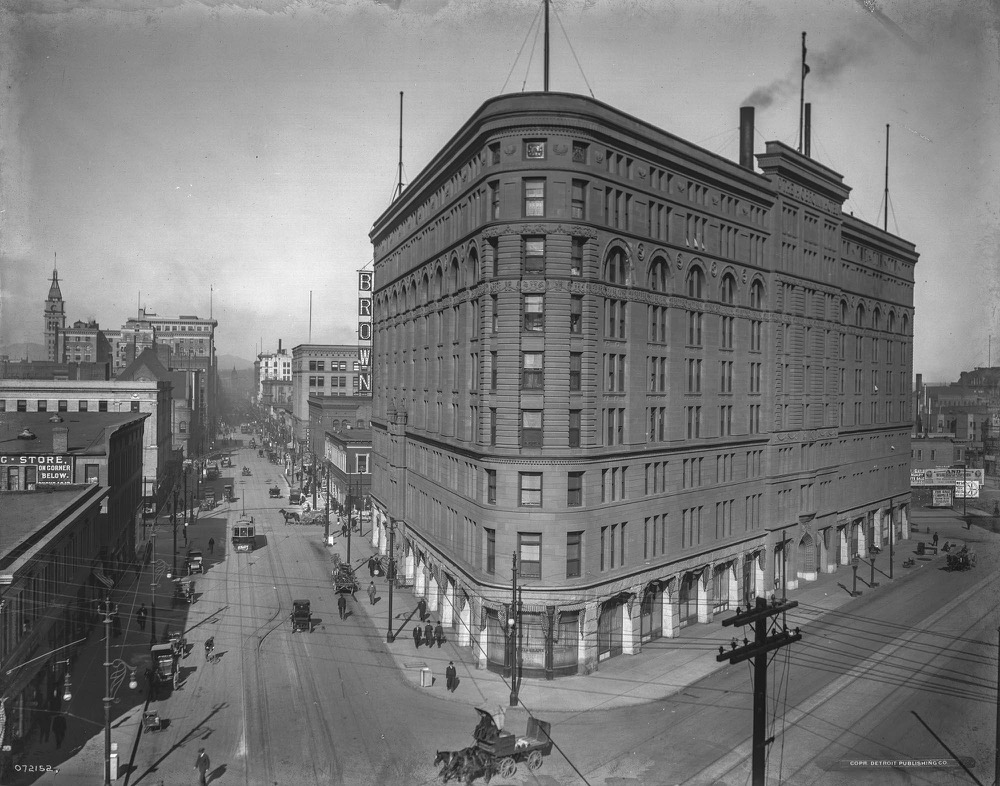 As the second-oldest hotel in Denver, it’s not shocking that it has a reputation for haunting. The hotel opened its doors in 1892 and has been operating every day since. Over that 125-plus years, several guests checked in but some never checked out.

At one time, several people rented permanent apartments on the upper floor. It is one of these residents that has become the hotel’s most famous ghost stories. Louise Crawford Hill was part of Denver’s high society and lived in the Brown Palace Hotel for 15 years. After her death, she apparently didn’t like people wandering around her halls. The front desk began receiving calls from her room, even though there was no operational telephone line to call from.

The Brown Palace was also the home to one of Denver’s most high-profile murders in 1911. A lover’s triangle ended in Frank Henwood murdering Tony Von Phul and an innocent bystander out of their love for a woman … a married woman whose husband was neither of the men. Their ghosts haunt the hotel, and guests have reported strange noise and disembodied voices floating through the building. 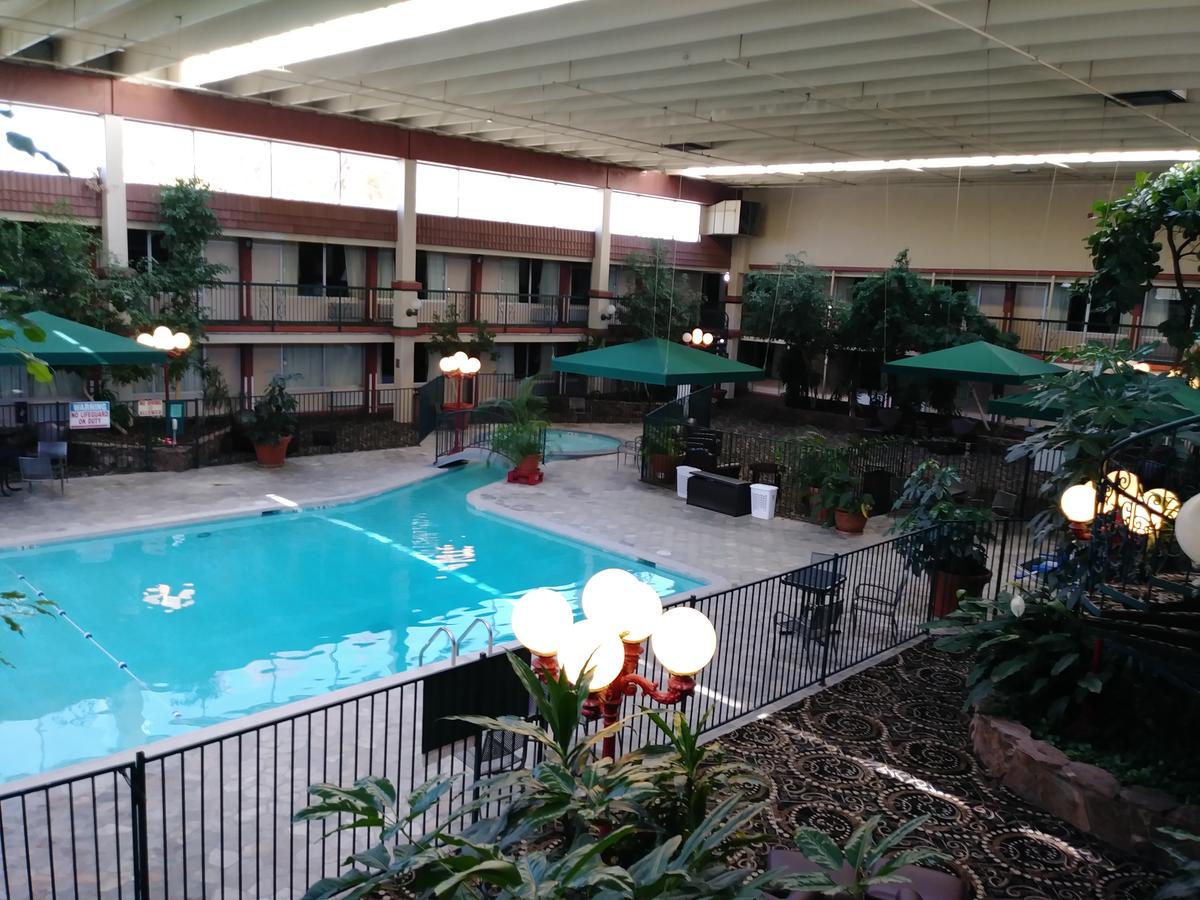 Check into this hotel right off I-25, and you might just meet three of its longtime residents. Formerly the Holiday Inn Holidome then Plaza Hotel, it doesn’t have the history of some of the other hotels on the list, but that doesn’t make it any less creepy. It is said to be haunted by a little girl who haunts the room across the hall from the King Suite. She apparently enjoys playing tricks by hiding things or turning on the A/C. A male ghost is also rumored to reside here in the northwest wing, and he isn’t playful. Witnesses say he is an ominous presence. A female ghost also peers out at the swimming pool from one of the rooms. Is she watching out for wayward swimmers or desperately wanting to join in the fun? 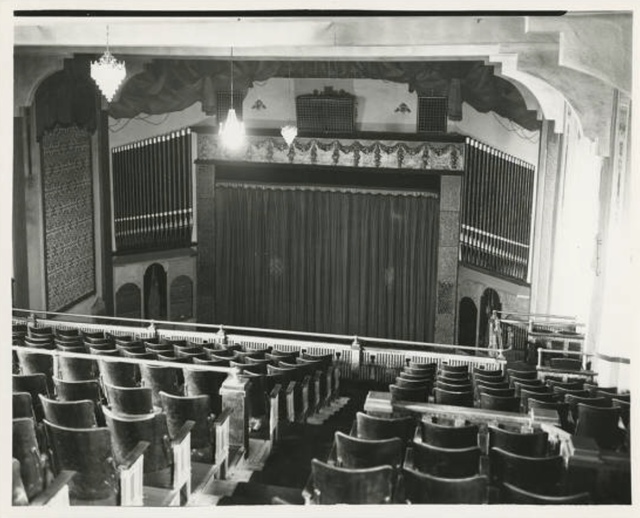 Inside the old Chief Theater. Is Rosie watching you from the balcony? Courtesy of cinematreasures.org.

What is it with the Clarion Inns in this state? If you’re looking to scare up a few pre-snooze ghosts, the third floor of Greeley’s Clarion Inn might be for you.

Hotel workers have told of a floating apparition who goes by the name “Rosie.” She could be the subject of a well-known story in Greeley about a ghost from a different era that haunted the same location.

“I once had a housekeeper call from one of the rooms and she screamed over the phone that she saw ‘something’ in a room,” said an accountant for the hotel and manager of the nightclub on the hotel’s supposedly haunted third floor. “The maid ran out of the hotel that day and never came back.”

The ghost predates the hotel. Prior to building the lodging space, a theater stood on the grounds. Built in the early 1900s, it was called The Electric Theater but was renamed The Chief in the '60s. The ghost, dressed in a white, turn-of-the-century dress with flowing blonde hair, was seen on the balcony of the old theater, which happens to be about the same level as the third floor of the hotel. She is reportedly a former theater actress who was murdered by her lover, the theater manager. According to legend, he bricked up her body in a wall in the basement of the theater. Now, she waits for you to join her for an overnight stay. 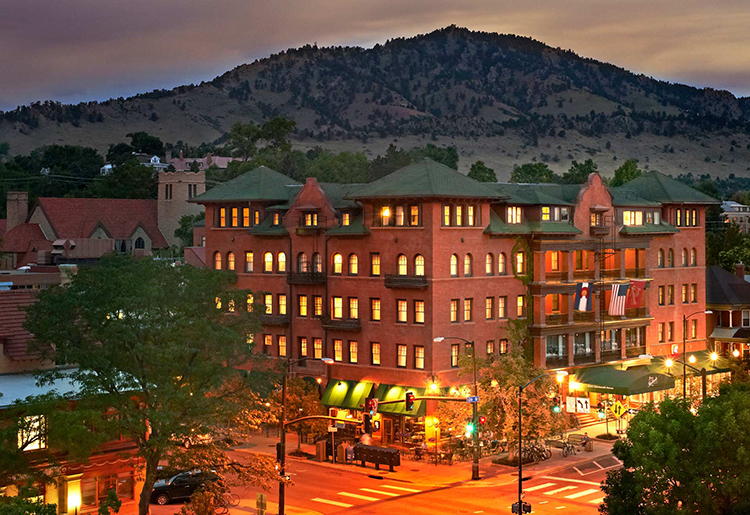 The history of Hotel Boulderado began in 1905 when the Boulder City Council wanted to have a first-class hotel to accommodate the important people pouring into Boulder. It’s a study in amazing architecture, Colorado-sourced sandstone bricks, and a whole lot of supernatural activity.

The original rooms that were numbered 302 and 304, in the older part of the hotel, have reported spirits roaming about. The third-floor hallways and the top floor of the old section are also quite active. The possible reason: the three suicides and one attempted suicide that is rumored to have occurred at the hotel.

One person died by gunshot on the fire escape, one died by gunshot in a room, and one unfortunate soul killed himself by chloroform while his wife was in the bath. Upon finding his body, she attempted to go by the same means but was not successful. 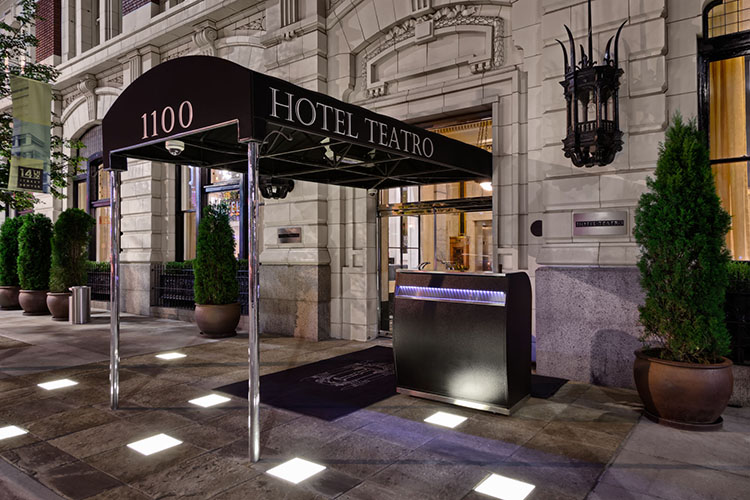 While the hotel itself is relatively new, opening in 1997, the building it is in was built back in 1911. Back in the day, the building was the Denver Tramway Building, and whatever may have haunted its halls stayed dormant until the hotel began renovations. Crews first began noticing paranormal activity in the form of strange occurrences, including disembodied voices, which are still heard by guests to this day.

The most commonly sighted spirit at the Hotel Teatro is a mechanic, the “Tool Man,” who is seen walking the halls carrying his tools. He is believed to have been one of the mechanics who worked on the railcars in the basement when the Tramway was still in operation. He also had an accident on the job and now haunts the place of his death. 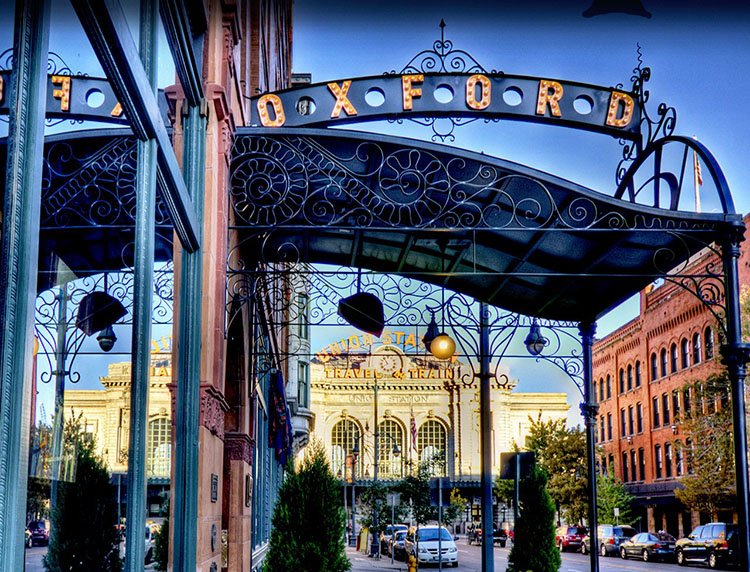 After a long day at work, you decide to take a load off and grab a drink at the Oxford Hotel’s bar, The Cruise Room, before you catch the light rail home. It’s a slow early evening, and you take a seat a few spots down from a gentleman who is ordering a drink. The bartender asks what you’d like, you order, and turn to strike up a conversation with your fellow traveler. But when you look in his direction, he’s gone, and you are the only customer at the bar. You just met the bar’s most famous apparition, a former postal worker who often drops in for a drink but always rushes out before drinking, saying, “The children, I have to get the gifts to the children,” according to diningout.com. He first appeared in the ‘30s, and after investigation, the hotel staff found an account of a postal worker who met a tragic end as he made his way to deliver Christmas gifts to the Central City.

“The people of Central City assumed that the postal worker had sold the gifts and took the money. In the spring, however, they learned otherwise. They found the bag of gifts alongside his decomposing body in between Denver and Central City,” the site relates.

The Oxford Hotel in Denver was built in 1891 and is the oldest hotel in Denver. It was designed by the same man responsible for The Brown Palace Hotel and the similarly haunted Peabody-Whitehead Mansion. The postal worker is just one haunting story, and an extramarital affair turned murder is another. In 1898, a young woman named Florence Montague was holed up with her lover in room 320 when she was found and murdered by her husband. Since that day, her ghostly form has been photographed in the room and appears to have a particular liking (or disliking?) for men. 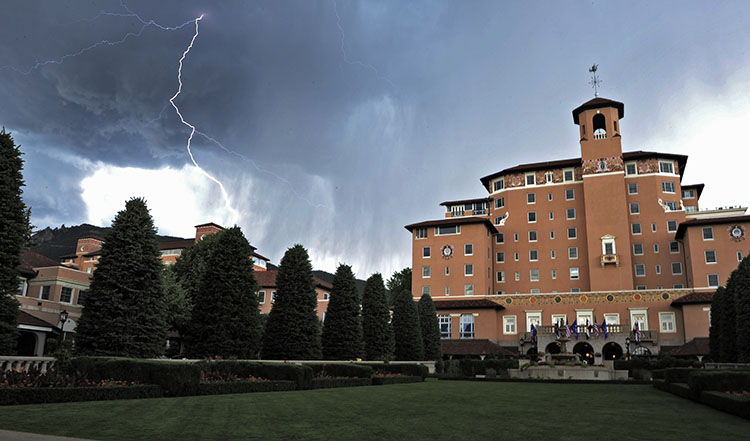 This picturesque lodging offers plenty to see and do on its sprawling grounds. With a rich history and amazing location, it’s no wonder that people love to spend the night, whether alive … or dead.

In 1890, a wealthy Prussian Count, James Pourtales, headed West to make a name for himself catering to the recently wealthy mining crowd. On a 2,400-plus piece of land by Cheyenne Lake, the Count built a resort and a large casino. It burned down in 1897 and was quickly built back, with a hotel to boot.

The Count developed a partnership with Spencer and Julie Penrose, the namesake of Penrose, Colo., and Julie often stayed in the penthouse while Spencer was away on business. Spencer passed in 1939. Julie lived in 1956, but it is rumored that a week prior to her death, she went missing in a wooded area by the lake. She was unrobed, shaking, and not able to tell anyone how she got there. She passed away shortly after.

It’s not a surprise, then, that most paranormal activity has been reported in the penthouse. Cold spots, moving objects, and lights with a mind of their own have been reported. Julie doesn’t just stay in her room, however. The staff has noted that a woman in a period 1930s dress has been seen floating down the hallways and up the front staircases at night. Whether it is the spirits of staff that passed away in the 1897 fire, Julie Penrose, or another otherworldly guest, the Broadmoor certainly has some scares to offer. 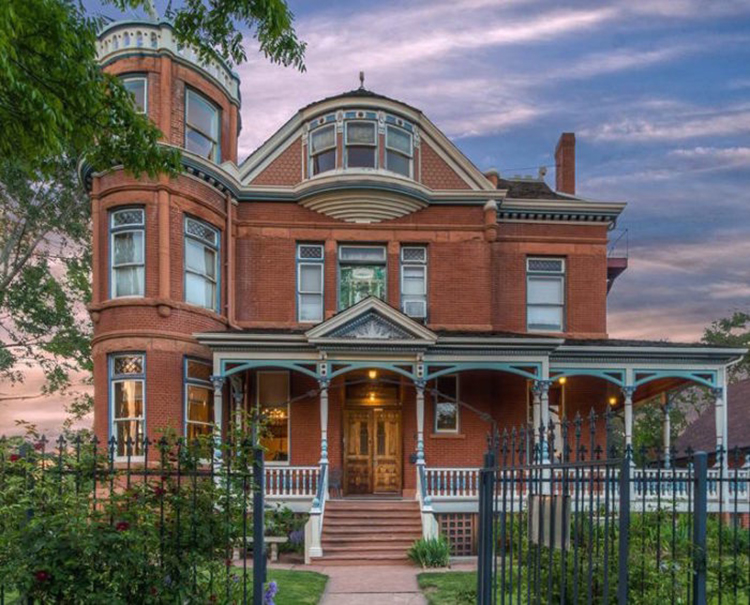 “Teen Girls Found Slain in Denver Apartment.” This was the headline of the Denver Post on Oct. 13, 1970. Two young women were found dead in what is now the Lumber Baron Inn: one was sexually assaulted and strangled, the other, who was simply there to visit her friend, was also murdered, her body crammed beneath the bed.

This gruesome and horrifying crime was almost 50 years ago, and there are some that say the spirits are still not at peace. The lumber baron was in such bad shape that it was set to be condemned in the 1990s, but it was saved from the chopping block and turned into an Inn. Guests have reported seeing a young woman roaming the halls. Paranormal groups claim to have caught EVPs of the murder victims describing their terrifying death.

What do you think? Have you stayed at any of the above haunted hotels? Share your thoughts with us in the comments below.