Bring out the ol' tinfoil hats and popcorn, because it's conspiracy theory time!

Over its 25-year history, there have been countless conspiracy theories surrounding Denver International Airport. So many, in fact, that we don't have enough room to include all of them on our list. If you're interested in seeing all of the theories circulating about the airport, you can click here.

For our list, we're including a few of the more outlandish and downright entertaining ones. Are these conspiracy theories fact or fiction? Take a gander at the theories we've listed out below and decide for yourself!

But, be warned. It will make you question everything, if you dig deep enough.

The Creation of DIA Was Not Necessary

Denver already had an airport (Stapleton), so why would there be need for a new one? Typically, when a new building is being constructed to replace another, it's because the previous structure has faults or the new structure will have technological advances that the other one couldn't maintain. This was not the case with DIA and Stapleton. Stapleton was functioning properly, and there was no reason to have a new airport. If that wasn't enough, no one knows who the mysterious and anonymous organizers were that pushed for the creation of DIA. Many people have come to believe that the airport is a cover-up for something more ominous, like the next theory on our list.

The Airport Is Home to an Underground City

Odds are you've heard of this conspiracy theory before, but in case you haven't: a secret city sits beneath the airport. One of the more intriguing theories associated with the underground city is courtesy of the sci-fi classic Close Encounters of the Third Kind. Apparently, if you plug in the coordinates (104, 44, 30, 40, 36, 10) sent by the aliens in the film into Google Earth (W104' 44' 30' N40' 36' 10'), you'll get none other than Denver International Airport! And that's not even the craziest part! When the film was made, DIA was nonexistent—the airport opened on February 28, 1995, and the film was released on November 16, 1977, so there's a nearly 18-year gap. There are also beliefs that tunnels lead to concentration camps and Nazi prisons, and even that the underground city is home to aliens/creatures. Which brings us to the next theory ...

Lizard People Are Hiding Beneath the Airport

Alien lizard people live beneath DIA and will eventually rule the world. And no, we're not joking! Known as "Reptilians," these lizard creatures are shape-shifters and are using DIA as a base of operations in their quest to take over the world! If that's not bad enough, apparently the aliens use slaves to do their bidding. 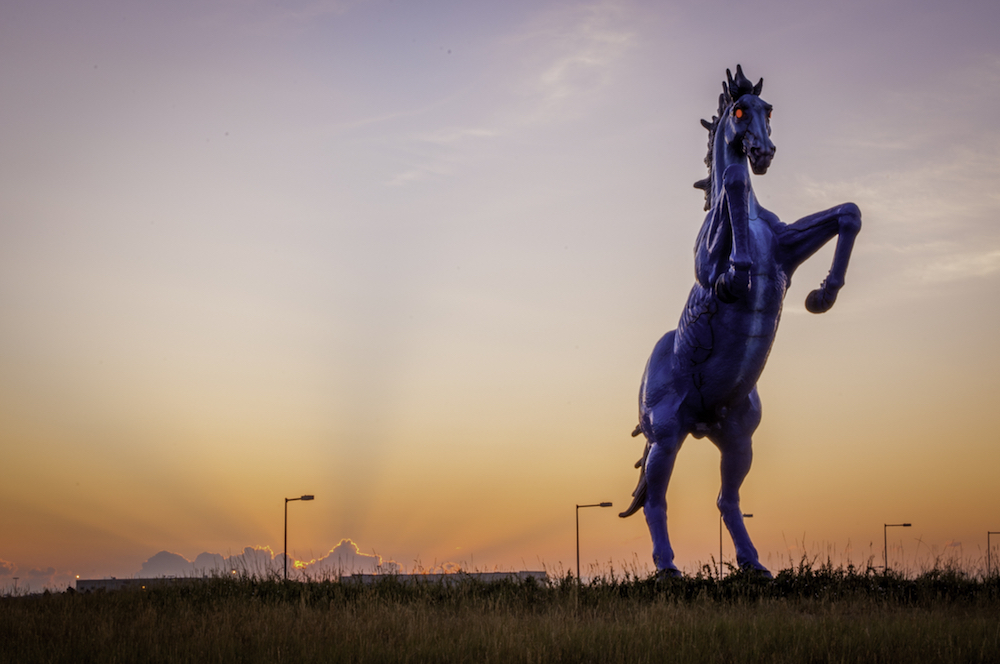 "Blucifer" Represents One of the Horsemen of the Apocalypse

That creepy blue bronco with the piercing red eyes that greets passengers outside of the airport is one of the more famous on this list. Originally commissioned in 1992 and eventually installed in 2008, the sculptor was killed in 2006 before the 32-foot sculpture was complete. Many theorists believe that the horse represents death and destruction—one of the Four Horsemen of the Apocalypse as seen in the last book of the Bible (Revelation 6:1-8). Even if the theory is debunked, you've got to admit that its history is unsettling.

Next time you're in the Great Hall at DIA, keep an eye out for a floor tile with a mining cart etched into it. Four letters are engraved into it that say "Au Ag," which doesn't seem too significant and often represents the symbols of silver and gold. But, to theorists, the "Au Ag" stands for the Australia Antigen (AUAG)—a deadly strain of hepatitis. Not only that, but the potentially potent biological weapon was discovered by one of the founders of the airport. You can find the tile directly in front of the biological warfare mural. So, you know ... no big deal.

A time capsule seems normal, right? Wrong. The capstone above the time capsule has a ton of letters and various symbols stamped into it, but they're not any ordinary letters. Those letters include the New World Airport Commission, an organization that doesn't exist. Many believe that the New World Airport Commission refers to the New World Order (aka the New Nazi Party). Evidence of the Freemason group's influence is clearly stamped on the capsule and leaves theorists to believe that the Illuminati is working with the New World Order. Now, the only question remains: what's inside the capsule?

What are your thoughts? Are these conspiracy theories fact or fiction? Also, are there other wild theories about Denver International Airport that we didn't include in our list? Share them with us in the comments below.