Want to pass the "vibe check"? Don't be basic; simply learn the Gen Z slang and you'll be totes* Gucci.

Please Note: This Guide to Gen Z Slang has been updated for Summer 2020!

It seems that every few years or so, new hip terms and lingo enter our lives, and we're forced to either adapt and learn the slang or be stuck in our ways and feel disconnected from everything and everybody. And like previous generations, the kids of Gen Z—those born between 1996 and 2010—have come up with their own slang, much of it tied into the media culture they've grown up with.

So, we've looked far and wide for the best Gen Z slang around the internet (and talked to our local teens as well), compiling the most-used Gen Z terms into this comprehensive guide in order to help you get a better grasp on the lingo. Annnnd, it's been updated for the summer of 2020! (You're welcome.)

Used mostly by VSCO girls (defined below). Response when one is caught off-guard. Means you don't know what else to say. E.g., "I failed the test." "And I oop!"

Refers to someone who is unoriginal and only follows mainstream trends.

An affirmative response meaning "definitely," "absolutely," etc. E.g.,"When this quarantine is over, wanna meet up at the mall?" "Bet!"

Gender-neutral term for a friend; can be used in disgust or excitement.

An expression that denotes various emotional responses when a person can't comprehend what was said or what's happening. Used on blogging sites like Tumblr.

Something that makes one cringe. (Editor's Note: "Learning Gen Z lingo is 'cringy' for us millennials!")

See the definition of "thicc" down below ... means the same thing as thicc, but even better and juicier. (We're told it's a compliment) 🤷‍♀️

Over the top or excessive. Someone who is exhibiting dramatic behavior.

The ultimate insult; an adjective describing someone who is disingenuous, lies a lot, talks behind people's backs, and pretends to be your friend but secretly doesn't like you.

Used to describe those you consider close friends.

Describes something that is really good or cool.

A transformation of one's appearance, usually from unattractive to very attractive.

A term used to describe what someone wants in their life (i.e., "Couple goals, squad goals").

Comes from the high-end fashion brand. Another way to say "good," "chill," or "awesome."

An acronym for "hit me up," which could refer to hanging out, texting, or talking on the phone.

Used to describe one's thoughts, desires, or feelings in a proclaiming, exclamatory manner. The opposite of "low-key."

Something that is highly influential or unique, like works of art, artists, performers, etc.

A reaction to someone being funny. A replacement for LMAO.

Leaving Someone on Read

A cold shoulder. Refers to opening a message and not responding, while the sender can see that you opened it.

Let's Get This Bread!

A pep talk expression similar to "Let's do this! We got this, guys!" (Editor's Note: Has absolutely NOTHING to do with bread.)

When something is amazing or popping.

Used to describe one's thoughts, desires, or feelings in a subtle way.

Another way of saying "Me too; I can relate to that."

A deflection; basically the modern version of "I know you are, but what am I?"

A bit controversial with the elder generations, this one is Generation Z's dismissive response to suggestions from anybody older. E.g.: "You should get a checkbook for your bank account." "OK Boomer." (insert eyeroll 🙄)

Describes perfection. "Her eyebrows are 'on fleek.'"

The same as "yikes." When you don’t really care but should at least say something.

Stands for "One True Pairing;" your favorite "ship" (see Ship definition below).

A word that means to "get together with" someone of the opposite sex. E.g., "I can pull any girl I want."

Basically means to hang out, as if you're "pulling up" in front of their house. E.g., "Anybody want to pull up?"

Being upset over something little or inconvenient.

When a third person wants two other people to be in a relationship -- or supports an existing relationship.

Another way to say you're shocked or surprised.

Originating in text-speak, this is the new Gen Z sign of laughter in some circles (mostly VSCO girls); the new "hahahaha." Some people actually pronounce it (somehow!). (Editor's Note: We thought it was Parseltongue from Harry Potter!)

Positive term for anything cool, but most frequently used to describe a good song: "That song really slaps."

Slide Into Their DMs

A phrase used to signify that one wants to send a flirtatious message over social media.

Extremely small and cute; or, extremely large and cute in an ironic way. Basically, just cute.

An attractive person; someone that looks so good that you want to eat them for a snack. Related: The phrase "full-course meal" was derived from "snacc" —it refers to an upgrade.

A "stalker fan." You're not just a fan; you're a huge fan on the verge of stalking (but not in a creepy way!).

Short for "suspicious." E.g., When you see something "sus," you pull out your pepper spray.

The scoop or gossip. "Spill the tea."

Pleasantly plump; curvy in the right places (especially the butt or thighs).

Describes someone who is desperate for attention from a romantic interest.

Upset, sad, or disgusted; has evolved from its original definition of being reminded of a negative situation.

The vibe describes the overall mood of the situation; the "aura."

A quick check of the vibes and attitudes in any situation. Is a person chill? Is there a problem here? Are they going to kill the mood? You either pass or you fail the vibe check; there's no in between. For instance, Karen fails the vibe check. Coronavirus fails the vibe check. We were all vibin', having the time of our lives, and COVID-19 swooped in and killed it.

A really basic white girl who usually has a hydro flask and a metal straw; uses terms like "sksksks" and "And I oop;" wears shell necklaces, scrunchies, oversized t-shirts, short shorts, and Birkenstocks; and talks a lot about saving the turtles. They're named after a picture editing app called VSCO (pronounced visco). 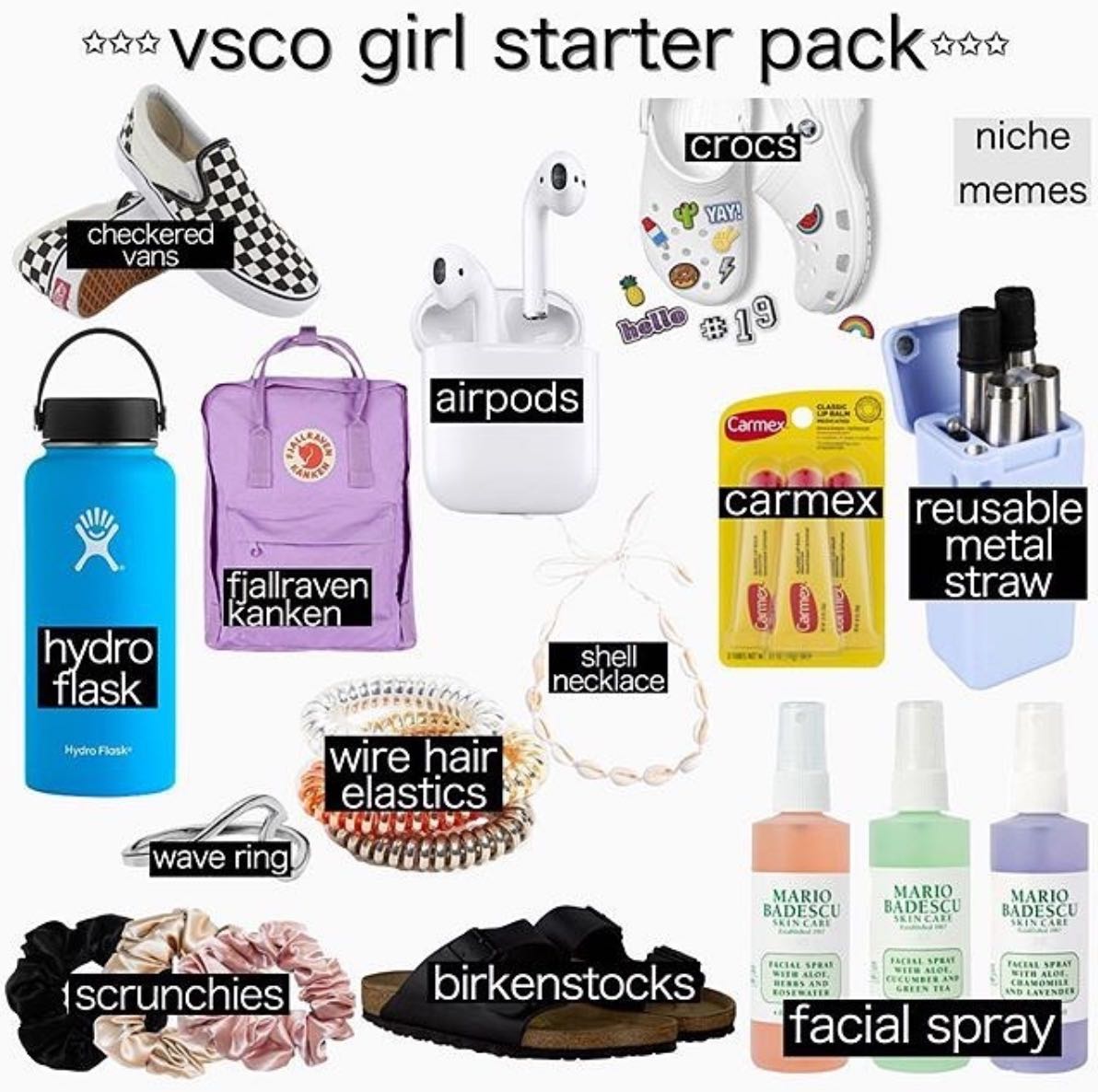 An exclamation that could be used in various situations—as a way to say "yes," to express excitement, to issue a battle cry, etc.—depending on context. Yeet is also used to accompany a throw.

*Since the initial writing of this article, we have been informed by our Gen Z peeps/squad that "totes" is not actually a term currently used by Generation Z. Our bad. (Specifically, we were told that our use of "totes" was "cringy.")

**This list of Gen Z slang has been verified and approved by your local 16-year-olds.

Disclaimer: While this list is for the most part universal because of the internet, the usage of some phrases could vary depending on region and age group.

Well, what do you think?? Did we miss any? Let us know in the comments below.