These hotels may have vacancy, but that doesn't mean the rooms aren't occupied.

Colorado’s mining and railroad past laid the solid foundation for the state we are today. But, so many who came to the state to prosper found an untimely and unfortunate end. Many never moved on and continue to haunt the lodging establishments in the small mountain and mining towns that they called home.

Do you dare to dream in one of these haunted hotels? 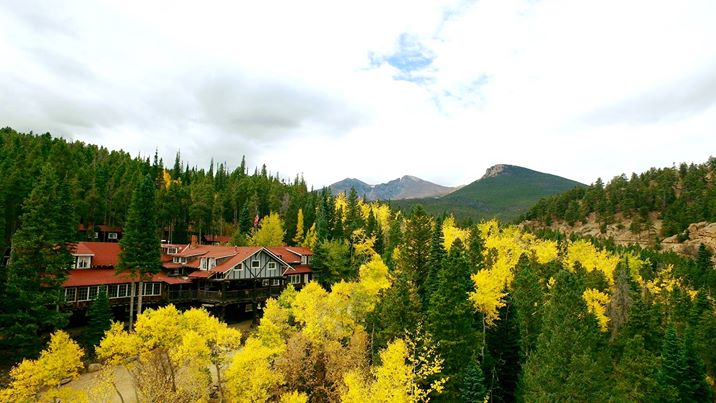 Courtesy of the Baldpate Inn.

The Baldpate Inn sits near the Rocky Mountain National Park and has served guests for more than 100 years. The inn was the dream of Gordon and Ethel Mace, who built a log cabin in Estes and several smaller tourist cabins to rent to travelers. Because of the success, the couple built the current inn in 1917. Today, one of the biggest attractions is the “Key Room,” which contains over 20,000 keys from across the world. The Mace’s were so enamored with Bald Pate that they continue to look over it today.

Staff and guests have reported that Ethel has haunted her old room for years and particularly likes spending time in the Key Room. She also likes to sit in a wing-backed rocker, feet up, and reading the Bible, before a fireplace that is now located in a storage room. Ethel also doesn’t appreciate the drinking crowd and likes to send drinks flying off the tables. Not to be outdone, Gordon isn’t a fan of smokers, smashing lit cigarettes, and stealing cigarette packs. 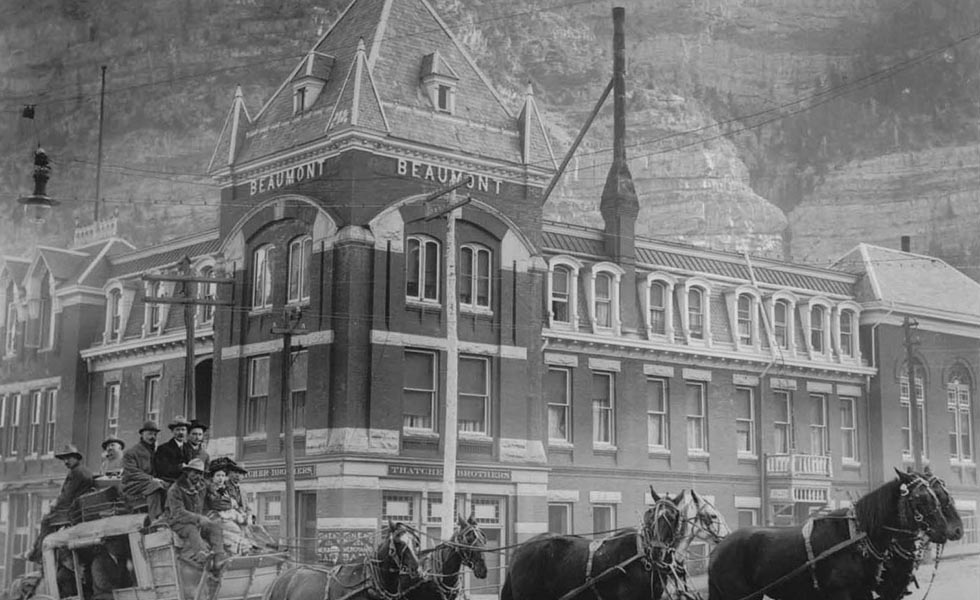 Courtesy of the Beaumont Hotel.

Ouray’s history is as rich as the ore mined out of the nearby mountains, and the Beaumont hotel has been a mainstay for most of it. Built in 1886, the hotel is rumored to be the site of a grisly murder of a woman by her husband. At 2:15 a.m., on every quarter moon, she roams the halls looking for her murderer. She is also seen on the anniversary of her death, replaying the ghostly scene of the killing, but her assailant is not visible.

Many of the rooms harbor paranormal activity, with doors locking and unlocking on their own. Guests and staff have also detected the smell of perfume and tobacco smoke in every room and all the hallways, even though the entire facility is non-smoking. 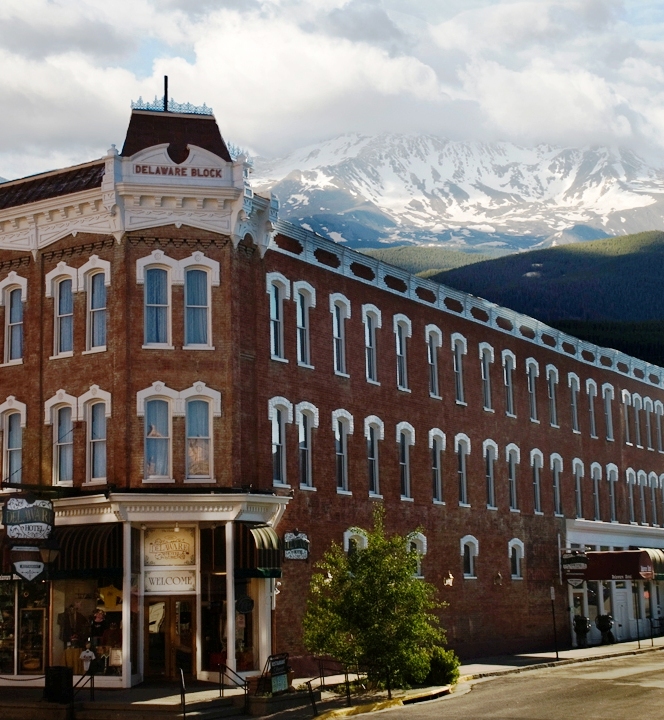 Courtesy of the Delaware Hotel.

At 10,152 feet in elevation, the Delaware Hotel in Leadville is home to the highest hauntings in the state (and we’re not talking about our green industry). Leadville was a booming mining town in its heyday, but not everyone shared in the success. Built in 1886, there’s a lot of history in the hotel. A woman named Mary Coffey is said to roam the halls – she was murdered in 1899 by her husband who shot her in the back in a jealous rage. She struggled to live for several days, but her wounds were just too great. Maybe it was her fight to survive that has left her trapped in the halls of the Delaware. 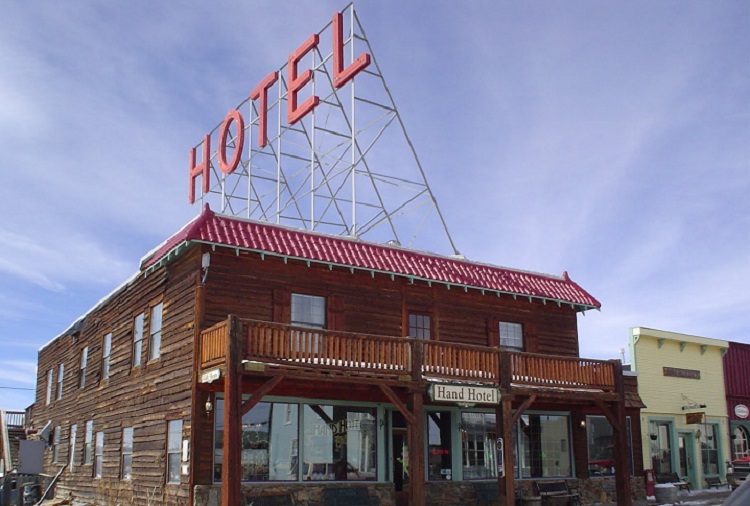 This 11-room gem in Fairplay often requires that you share its rooms, just not with another living guest. There is a haunting tied to each of its charming rooms, and there have been many recorded phenomena throughout the entire building.

It appears, there are both benevolent and malevolent spirits residing on the property. Stories range from a pair of mischievous twin girls hanging out in the kitchens (come play with us, Danny!), a demonic dog terrorizing the basement, and even Grandma Hand herself who likes to sit in the chair in the room next to her and rock it back and forth. 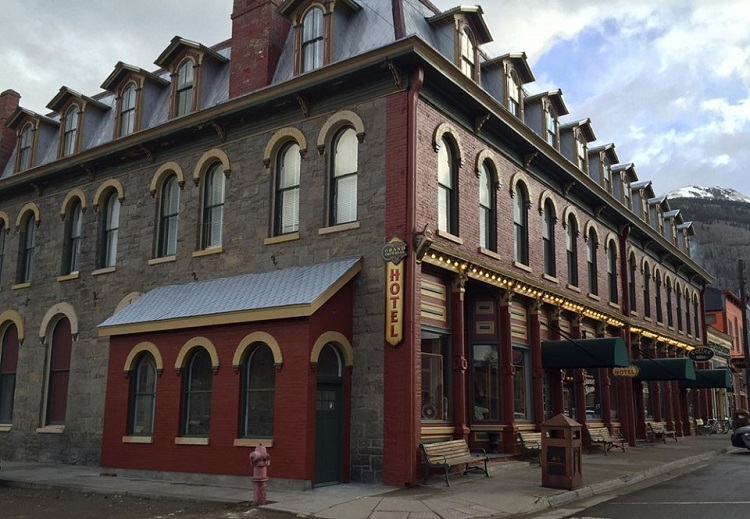 Just over Red Mountain Pass from Ouray, a stretch of road that has tragically claimed its fair share of souls, is Silverton and the Grand Imperial Hotel. It’s been inhabited on and off over the years, and the most recent renovations a few years back may have stirred up long-forgotten residents.

The most reported paranormal activity is on the third floor, where Dr. Luigi is said to remain after committing suicide – 125 years ago. During renovations, the owner reported having nails and chunks of drywall thrown at them. Room 314 appears to the be the creepy center of the hauntings, as it was the room that Luigi Regalia shot himself. Housekeepers have reported made beds that appeared to be laid on and getting touched by less-than-human hands. 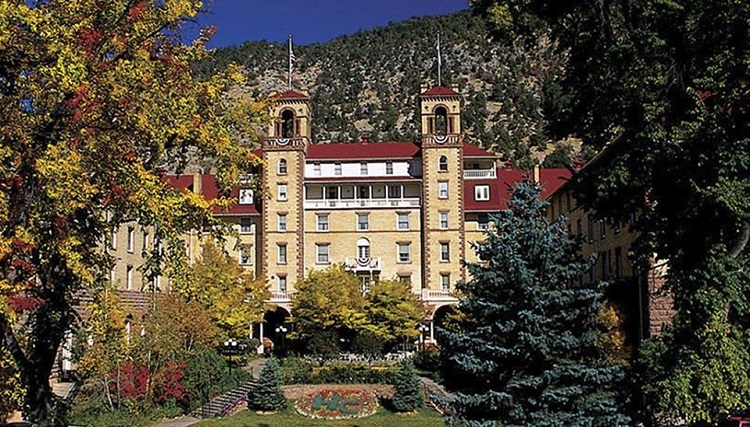 Hotel Colorado has long been a haunted hotspot. The hotel seems to be most active between 2 and 4 a.m., according to staff and guest reports. Elevators travel the floors with no one inside, the smell of cigar smoke wafts through the halls, and screams of a woman are heard throughout the hotel. She is believed to be a chambermaid who was murdered by her lover in a guest room. If you want the biggest bizarre bang for your buck, the dead are most agitated on the third floor and will make themselves known with flickering lights, televisions changing channels, fully materializing, and more. 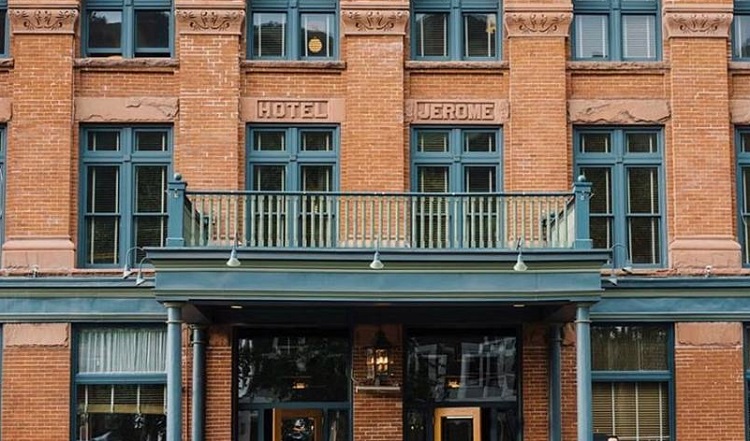 If a lodging establishment is referred to as the “Bad Luck Hotel,” it’s probably worth a little caution. The Hotel Jerome has had a rather high number of deaths and tragedies throughout its history. It has seen drownings, accidental deaths, murders, and more. Guests have said to glimpse these unfortunate souls wandering the halls, as well as one of the drowning victims in the hotel pool. 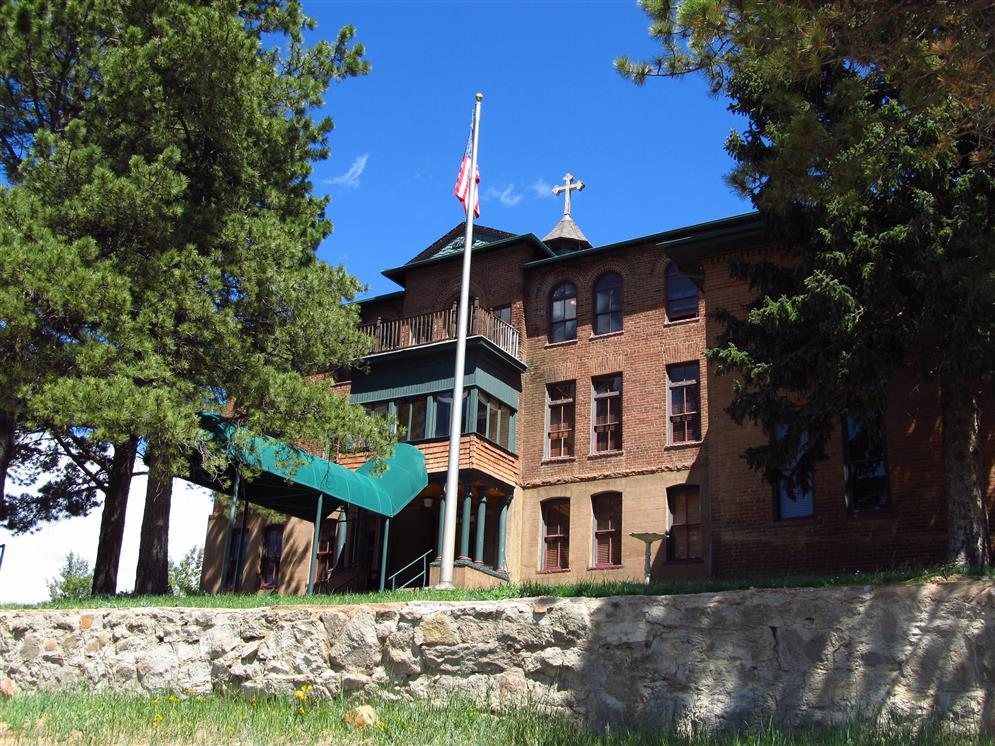 The whole town of Cripple Creek has haunting past, so it’s no wonder its hotels have several permanent residents. Hotel St. Nicholas was once a hospital during the gold mining days, containing a ward for the mentally ill. That in itself is enough for a series of really bad B horror movies.

Now a hotel, guests have report hauntings throughout the building. The activity particularly seems to be prevalent in room 11. Those who have stayed here have reported someone sitting at the end of their bed, and possibly past care-takers in the hospital days who have stayed on to watch over guests as they sleep.

"One has been identified as Petey, who on some occasions has moved small items or hidden cigarettes in the bar. Petey is believed to be the spirit of a young boy, possibly an orphan, who was cared for by the Sisters of Mercy in the St. Nicholas’ early days," says the hotel's site. 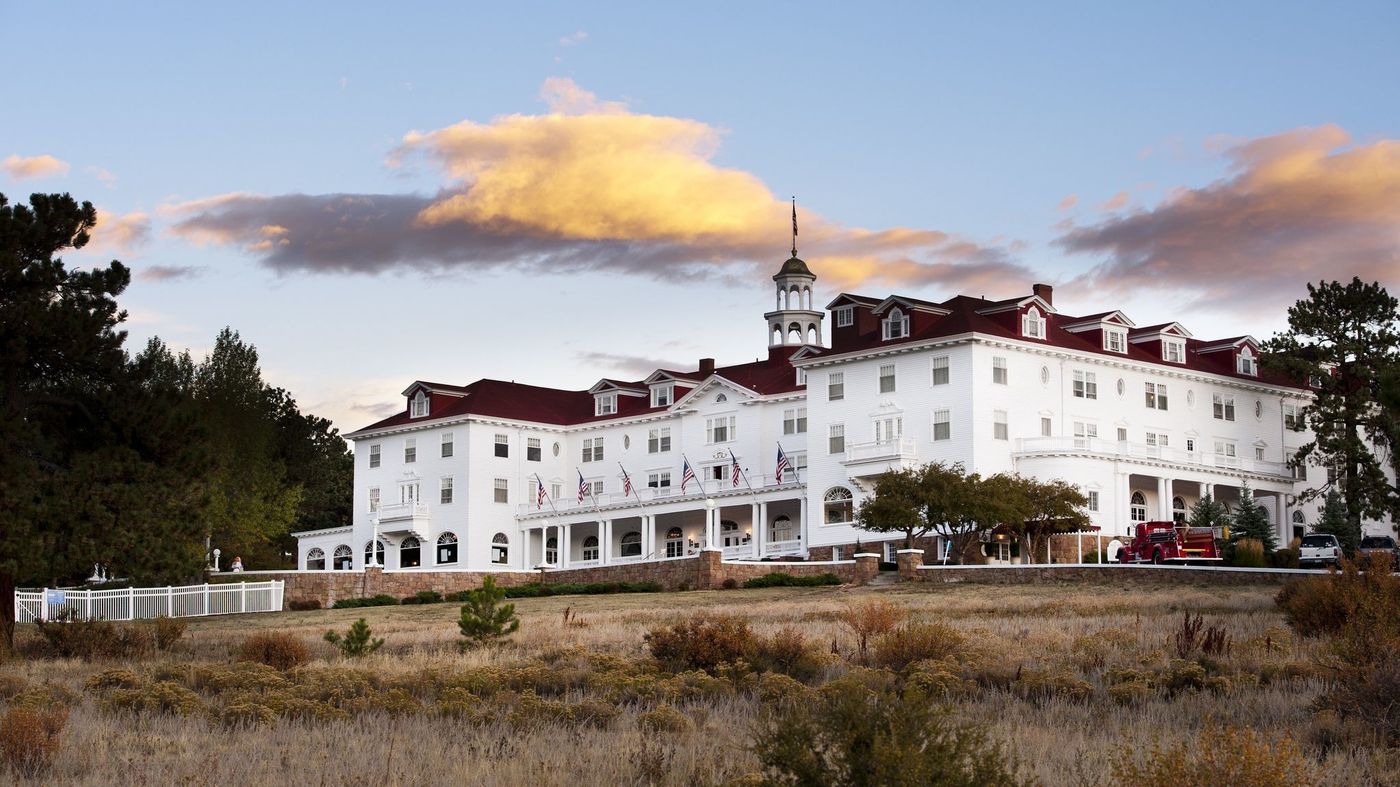 The Stanley Hotel is clearly one not to be left off the list. This well-known hotel reportedly spooked horror author Stephen King so much that it became the inspiration for the setting of The Shining. While the movie wasn’t filmed there, the later TV series was. The hotel opened its doors in 1909, and it’s been a hotbed of paranormal activity ever since. The sounds of children running and laughing down the halls are often reported on the fourth floor (which was once the staff quarters). Mr. Stanley, the hotel’s original owner and the inventor of the Stanley Steamer Automobiles, as well as his wife, are said to frequently say hi to the guests. Mrs. Stanley has been heard playing her piano. A former housekeeper, who was seriously injured in a blast at the hotel though didn’t die, is said to frequently assist guests in room 217 by helping them unpack.

There are many, many other reported apparitions and phenomenon that call the Stanley home, including the Earl of Dunraven, the lady in green, and chairs rocking on their own. You’ll just have to check in to meet all of those that never checked out. 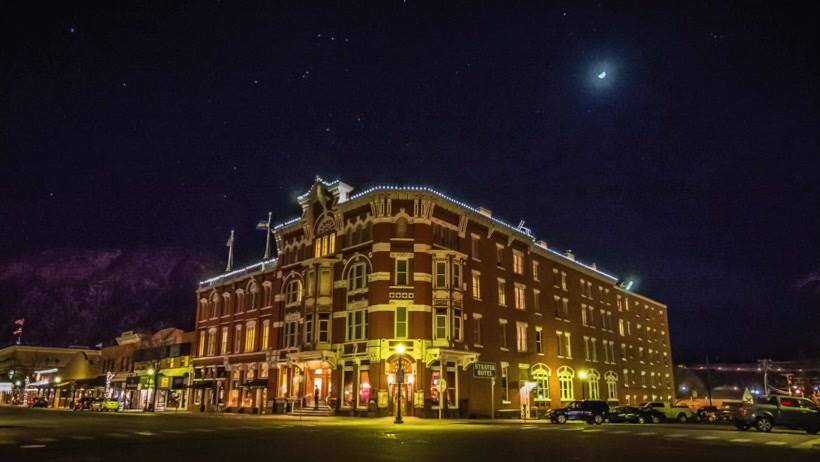 Nothing is more of a testament to Durango’s grand railroading days than the Strater Hotel. Built in 1887, this hotel’s gorgeous interior includes one of the most extensive collections of Victorian walnut antiques and a lot of history, both good and bad. There is an apparition in the clothing of a railway engineer who strolls through the lobby, as well as a shadowy figure that seems to appear out of nowhere and vanish just as quickly. The hotel staff has often reported being too scared to work alone on the hotel’s upper floors.

The Victor Hotel was built in 1899, and, like most buildings in the higher elevations served multiple purposes. It was originally a bank but also served as a storage place for the bodies of the dead during the winter, as the ground was too frozen for burial. Its Victorian décor and authentic birdcage elevator are magnificent, but it’s the fourth floor that might leave the biggest impression on you. That’s because that is where the dead bodies have been stored, and many of them refuse to stay buried. Apparitions, as well as the sounds of footsteps and voices, are heard when no one is there. Lights turn on and off on their own. Room 301 is said to be haunted by a ghost name Eddie, who fell down the elevator shaft; the doors of the elevator often open and close on their own.

What do you think? Will you be checking into any of the above hotels? Have you experienced any paranormal activity while visiting them? Let us know in the comments below.