Inside One of the Most Haunted Buildings in DC—Halcyon House

Inside One of the Most Haunted Buildings in DC—Halcyon House

This home may look like another decadent mansion in Georgetown, but it holds some spooky secrets.

Nestled in Georgetown is the historic (and reportedly haunted) Halcyon House, a mansion built in 1787 by the first Secretary of the Navy, Benjamin Stoddert.

After its emergence on the scene, the house quickly became a hub for D.C. social life, back in the day. 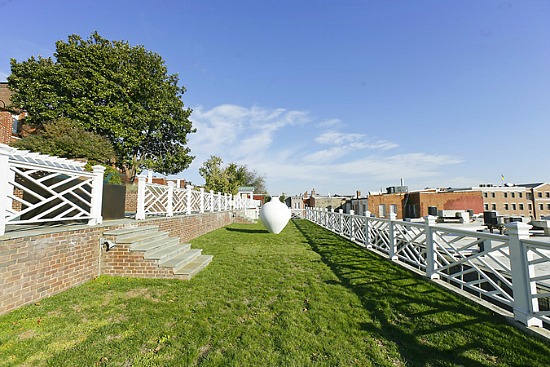 The house's gardens were designed by the famous D.C. architect, Pierre L'Enfant. (Courtesy of dc.urbanturf.com)

Halcyon remained in the Stoddert family until it was sold to a nephew of Mark Twain named Albert Clemens in 1900. Clemens spent years redesigning the house, basically turning it into a funhouse, of sorts. He built staircases that led to nowhere and secret trap doors in the hopes that his expansions would help him curb death. He was unsuccessful in this, and after his death, the house changed owners several times, ultimately being sold in 2012 for $11 million. Today, it is home to the nonprofit group Halcyon.

The nonprofit says about their office location: "While the property’s historical significance is grounded in the past, the house has been transformed to meet the needs of forward-thinking individuals solving modern-day challenges. Halcyon House is steps away from one of the most vibrant areas in the nation’s capital where students, residents, and tourists alike mingle and interact in the shops, galleries, cafes, and restaurants."

While the house is currently being used to transform the future, past residents are said to still haunt the grounds. There have reportedly been multiple sightings of the owners, Benjamin Stoddert and Albert Clemens. The house was believed to have served as a stop on the Underground Railroad, with multiple runaway slaves dying in the basement. Apparently, to this day you can hear their moaning from down below.

The house is now private property, but you can walk by it if you are in the Georgetown neighborhood. And hey, maybe you'll see a ghost wandering around the grounds! It's worth a look, right? The address is 3400 Prospect St. NW, Washington, D.C., 20007.