Welcome to the White House, Champ and Major!

In what just might be the best news of 2020, dogs will soon be back in the White House! Along with President-Elect Joe Biden and his wife Jill’s upcoming move to D.C., there will be a couple of additional residents. The Bidens' two German shepherds, Major and Champ, will be joining them at Pennsylvania Avenue.

Pets are a fun way for kids (and everybody else) to take an interest in the life and times of the presidential family. In fact, Hillary Clinton wrote a book about the letters that kids sent to Socks and Buddy, the Clintons' cat and dog.

Dogs finally return to the White House! 🥳⁣ ⁣ Meet Champ, one of the two lovely Bidens' german shepherds. The Bidens first welcomed Champ on Christmas 2008. Fun fact: Champ was the nickname Joe’s father had for him when he was a boy☺⁣ ⁣ Another fun fact: Biden once admitted that Champ caused several “accidents” on the carpets on the off-white carpeting the Cheneys’ used in the Vice Presidential residence😝

Champ is 12 and came from a breeder in Pennsylvania. Major, age 2, is a shelter dog from the Delaware Humane Association. He’s the first shelter dog to live in the White House.

"Wait, are you sure?" you say. "Wasn't there another shelter dog?"

Well, sort of. Lyndon B. Johnson had a rescue dog (found by his daughter), but Major is the first to be adopted from a shelter. 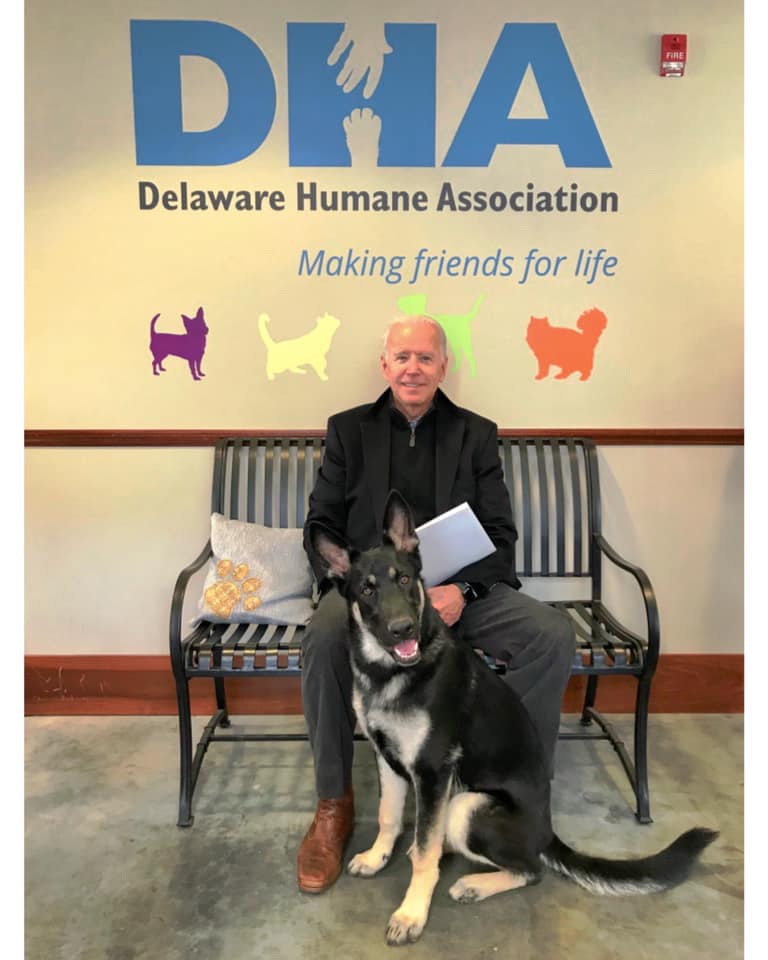 Major was adopted a few months before Biden announced plans to run for president. He was the result of a “foster fail,” as the Bidens first fostered him and then decided he needed to stay. (Well, of course, he does!)

Champ is no stranger to D.C. life. He lived at One Observatory Circle (the home of the vice president) in Washington, D.C. According to the Washington Post, Champ’s puppy days were the reason for the changeover from off-white carpet to hardwood floors. We think he will do just fine with the White House floors.

It’s believed that the Bidens' grandchildren (as grandchildren will do) chose the name Champ. Champ is also the name Biden’s father used to call him when he was a kid. So, it’s not set in stone exactly where the name came from, but we like it nonetheless.

Pets have long been a favorite part of the White House. Most of the presidents have had a pet of some kind, whether dogs and cats or parrots, goats, a horse, and even an alligator. President Trump was the first in about a century to not have a pet of some kind. James K. Polk also did not have pets.

Some of the earlier White House animals were more livestock and working animals than they were pets. Sheep, horses, and cows have grazed upon the White House lawn. Millard Fillmore had two ponies and was president of the Buffalo, New York, chapter of the ASPCA.

Historian and author Jennifer B. Pickens told the Washington Post,

"People love to see ways they can relate to their president, and I think pets provide that,” she said. “If you’re truly a dog lover and you have a dog, that shows, and it’s something people can see and enjoy.”

For true “zoo” status, the award goes to the Kennedys, who had a menagerie of horses, ponies, hamsters, cats, a canary, a parakeet, rabbits, and a variety of dogs that included a French poodle, German shepherd, Irish wolfhound, Cocker Spaniel, and Welsh terrier.

The above list is not all-inclusive. Many of the other presidents had pets. Check out the Presidential Pet Museum website for more fun and furry facts about presidents and their pets.

Earlier this year, the American Kennel Club released its list of Top Ten Most Popular Dog Breeds of 2020. Guess who was number two? That’s right, the German shepherd.

Do you think the German shepherd is going to increase in popularity like the Portuguese water dog did when the Obamas were in the White House? How do you think Champ and Major will take to presidential living quarters? Let us know in the comments!