On July 20, 1969, Apollo 11 landed on the moon and Neil Armstrong became the first man to lay his foot on the surface of anything other than Earth. To many, this achievement was the culmination of their life's work and the event that clearly marked the United States as the winner's of the global Space Race.

But for some, roughly five to six percent of the American population, the entire moon landing was merely an elaborate hoax intended to play a trick on all of humanity, even though there's an overwhelming amount of evidence to the contrary.

A conspiracy theory exists, one that claims the moon landing never happened, that the astronauts simply took off into orbit, while a fake video of the moon launch was shown, then came back down to be hailed as false heroes. The claim is that the moonwalk was filmed in a television studio, a con job intended to set the U.S. ahead of the Soviet space program.

The theories did not really take off until the 1970s, well after the Apollo program had been retired.

Some of the claims involve the American flag planted on the moon. It appears to be waving in the wind, of which, there is none on the moon due to the lack of air. The truth is that NASA used a right-angled rod, one that had been bent unintentionally by Neil Armstrong and Buzz Aldrin in transport, giving the appearance that the flag was waving.

There are no stars in pictures of the moon landing, conspiracy theorists say this shows they were faked, believing the stars should show up in the shots. The cameras NASA used to capture the landing used shutter speeds that were very high in order to ensure the shots were not overexposed due to the light of the moon, and as such, did not capture the stars due to their faint light. 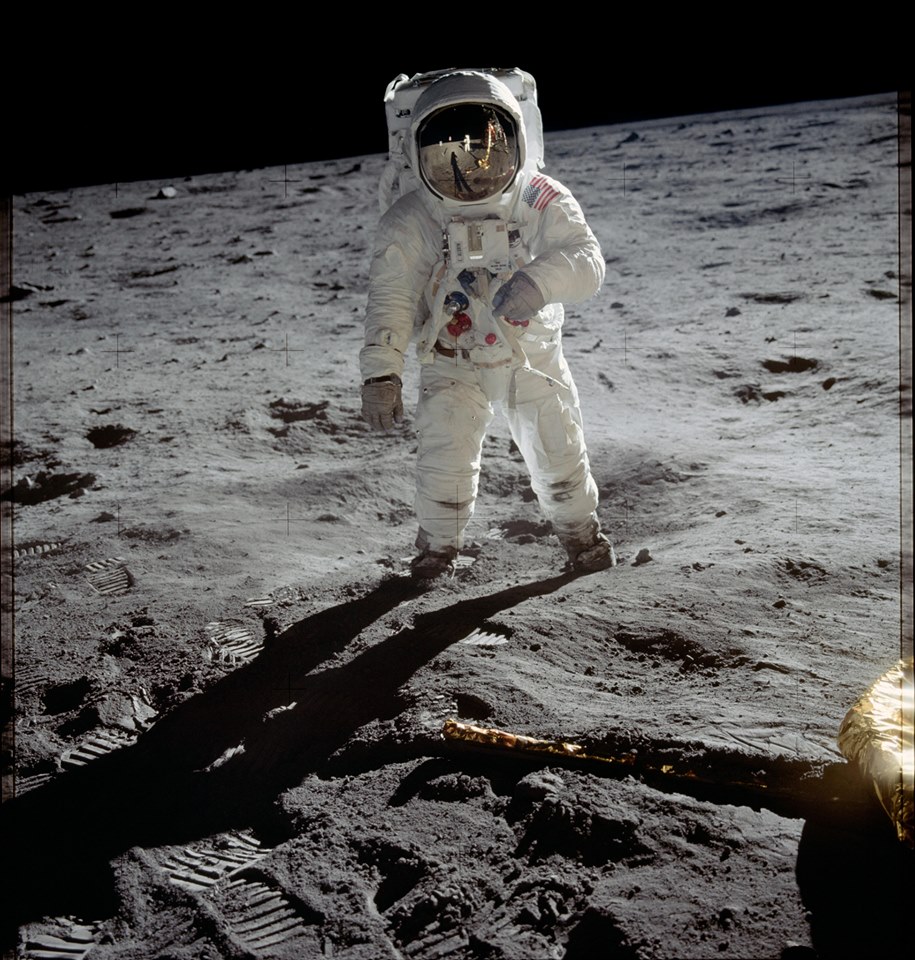 Another claim involves the reflection of Armstrong and the lunar module in Aldrin's helmet visor. There is no camera in either man's hands, theorists say this proves it was a fake, obviously someone else took the picture. When in reality, both astronauts had cameras mounted on their chests and did not need to hold the cameras up to their eyes to capture the shots. Armstrong's hands are actually near his chest, right where they would need to be for him to take the picture.

The inconsistent shadows, lighting, and colors in the shots lead some to claim the photos were doctored or taken on a set with artificial light. NASA used cameras with wide-angled lenses that distorted some of the images, and the direct light from the sun coupled with the craters, bumps, and hills on the moon's surface caused the distortions and inconsistencies in the photos.

One last claim we want to debunk is the claim the lander did not disturb any dust or leave a crater on the moon's surface. The fact that the lander was traveling horizontally before it touched down means that the thrusters were not pointed down, therefore they would not kick up a large dust cloud. A small dust cloud is actually visible if one looks closely, and the lack of a crater is due to the gravity on the moon, one-sixth that of Earth, so there was no need to use a large blast to slow the lander down. It was a more gentle landing, meaning there was no crater formed.

People love a good conspiracy theory, and no amount of scientific proof or facts will change their minds, so likely the moon lander theorists will go on and continue to grow and evolve in their belief that the whole thing was a big fake.

As we mark 50 years since man walked on the moon, we want to celebrate the hard work, dedication, and accomplishments that took humans to the moon, a place we have not been back to in 47 years. We look forward to the day when humans once again walk the surface of the moon and hope we all can celebrate that day together.

What do you think about all this talk about conspiracies and government coverups? Sound off in the comments below.