The American flag never looks the same after you’ve witnessed it folded up and placed into the hands of a widow.

On May 15, 2012, my grandfather’s service was held in a small funeral parlor in Tyler, Texas. At 87 years of age, he departed this world leaving behind his wife of 63 years, three children, and eight grandchildren. A post-WWII veteran, engineer, and family man, he lived his American Dream in East Texas. The man I knew who was perfectly content to sit quietly in the carport with his pipe had become ashes interred in a small wooden box. Upon arriving at the funeral home, there were two young soldiers in full uniform, standing perfectly still in the back. Hymns were played, my father read the eulogy, and from then on, my family’s focus was fixed on the two uniformed men silently performing their duties.

One of the young soldiers then took out a bugle from its case, opened a side door, and stepped out. I had heard Taps played before, but never at a funeral. Apart from the quiet sobs and sniffling from my cousins, I couldn’t hear anything else but that bugle. No cars honking, no birds chirping. 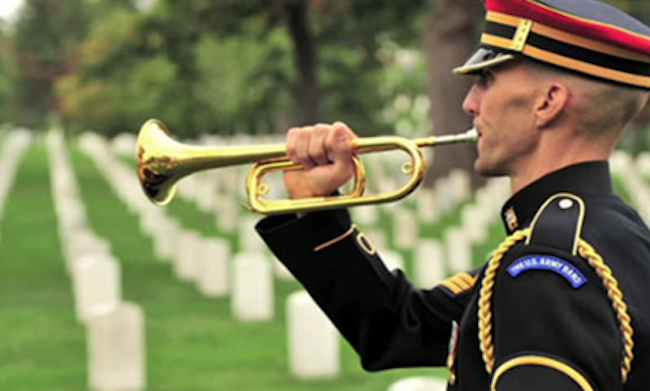 It seemed that the world knew to observe a moment of silence, if only just for a few tender seconds.

Immediately afterward, the soldiers opened the United States flag and began to carefully and meticulously fold it like it would fall apart with a whisper. I couldn’t breathe. It was as though any movement I made would defile this precious and honored tradition.

This was not the first time those young men had performed this ceremony. They had probably folded up dozens of flags for servicemen and this was the standard operating procedure. I had only seen something like this on television. But right in front of me, it was happening and it was painfully beautiful. No one spoke. When they had finished folding my grandfather’s flag, they saluted, and then one of the soldiers marched slowly and rigidly to my grandmother. I saw his face over her shoulder and with sincere care and condolence in his eyes, he knelt down and said,

“On behalf of a grateful nation—”

That was all I can remember him saying.

Collectively, myself, my parents, brother, cousins, aunt, and uncles crumpled into sobs. What we tried to suppress out of respect for these two gentlemen now came to a head and tears streamed freely down our faces. A closing hymn was played and we exited row by row. The soldiers had left their positions in order to stand on either side of the door like two centurions. Red-eyed and sniffling, I wanted to reach out and shake their hands, to thank them for their service to our country, to tell them they did a perfect ceremony, that what they did meant so much to my family.

The lump in my throat could only allow me to usher out a raspy “Thank you.”

I sat next to my grandmother in the foyer of the funeral home during the quaint reception. Needing to freshen up, she handed me my grandfather’s flag before excusing herself.

I had only ever waved a flag, never before had I held one like this. I stroked the embroidered stars and felt the firmness of the folds. It was exquisite. I marveled at the way the edges of the now-triangular flag looked so proud.

I have several friends that took the Oath for our country in various branches of service, had been to military balls, and have dated a few servicemen. They’ll have flags like this folded in their honor when they leave this life. Their widows will be the ones left behind to accept their flags.

In the few weeks after my grandfather’s passing, it was Memorial Day. There were ever-present flags in my neighborhood in Arlington, a stone’s throw from the Air Force Memorial and Arlington National Cemetery. I didn’t go to a barbecue, the pool, or to the sale at Macy’s. I didn’t really feel up to it. Instead, I thought of the wives, husbands, children, and sweethearts of those who had proudly served our country. That Memorial Day was different for me, and so will the rest of them be as I witness the end of every May.

I am just one of the many granddaughters of American veterans. There are millions like me. But at the end of the day, I am no less proud to be one.