Our Coloradans Then: Baby Doe Tabor, from Rags to Riches to Rags Again

Our Coloradans Then: Baby Doe Tabor, from Rags to Riches to Rags Again

From mining maven to penniless pauper, the "Belle of the Camps" died broke and alone in Leadville.

In 1935, an 81-year-old woman was found frozen on the floor of a shack in the mountain mining town of Leadville. She had a reputation about town of wearing gunnysacks tied with twine on her feet, turning away help that was offered, and generally bringing the town shame.

Her community had long forgotten what this woman once was. Rather than rags and gunny sack shoes, she was once considered the best-dressed woman in the West, as well as a go-getter and a seductress. Baby Doe Tabor may have died in relative anonymity, but her legend will always live on.

The Most Beautiful Woman in the West

Elizabeth Doe (née McCourt), a beauty with a talent for stirring up talk, moved from Oshkosh, Wis., to Central City with her then-husband, who planned to oversee the claims of his father. She quickly became noticed around camp, earning her nickname of Baby Doe among the miners. As the saying goes, the best-laid plans of mice and men often go awry, and this one certainly did. Baby Doe’s husband took to the bottle, leaving her to work the mines in his stead, it’s been said. She eventually had an affair, suffered a miscarriage, and the marriage failed. A woman who had such beauty, did not conform to gender roles, and committed adultery was no upstanding lady according to the times. Baby Doe was basically shamed out of town, and she eventually relocated to the booming mining camp of Leadville.

There, she struck gold, or silver, we should say.

Silver magnate Horace Tabor, the owner of the Matchless Mine, which was said to pull in $2,000 a day, took a shine to Baby Doe. The only problem was Tabor was 24 years older than Baby Doe and already married. To great public shame, he ended his marriage to his wife (he tried to do it secretly, but his wife didn’t go down without a fight and went public) and married Baby Doe.

She immediately was persona non grata with the upper crust of the area and shunned for being a seductress with no shame. Never one to back down or give in to public pressure, she had a grand wedding, complete with guests that could not be denied.

“Baby Doe’s wedding dress alone cost her new husband $7,500. In today’s worth that is the equivalent of around $178,000. Add a $2 million diamond necklace, and the attendance of the then-President of the United States, Chester A. Arthur, together with other high-profile guests, and you have yourself a Baby Doe-styled wedding,” according to VintageNews.com.

Eventually, the couple moved to Denver and had two daughters, Elizabeth Bonduel Lily and Rosemary Silver Dollar Echo. While Horace was known in the political world, and his wealth had created newspapers, a bank, the Tabor Opera House in Leadville, and the Tabor Grand Opera House and the Tabor Block in Denver, it was never enough to buy Baby Doe a place in high society.

Despite previous success, the repeal of the Sherman Silver Purchase Act turned the Tabor fortune into dust. In 1893, the silver market bottomed out, digging the Tabors into a deep hole. The metal became virtually worthless, the family sold all it had except the mine, and the “Bonanza King of Leadville” himself began to work the pit.

"Hang on to the Matchless. It will make millions again."

These were the words Tabor was rumored to have told his wife as he lay on his deathbed. This, however, could be another one of our state’s tall tales. Whether he actually said it, she took him at his word, or she continued mining on her own in hopes of regaining wealth, his prediction of a return to production was so much fool’s gold. The mine never attained success again.

Baby Doe continued to work the Matchless, pulling very little silver from the mine and living in a squalid, makeshift shack on the property. Though she put all her determination and grit into keeping it afloat, she eventually was forced to sell it. The new owners allowed her to stay in her shack until she died, and it was reported she remained too proud to accept help from anyone until the very end. 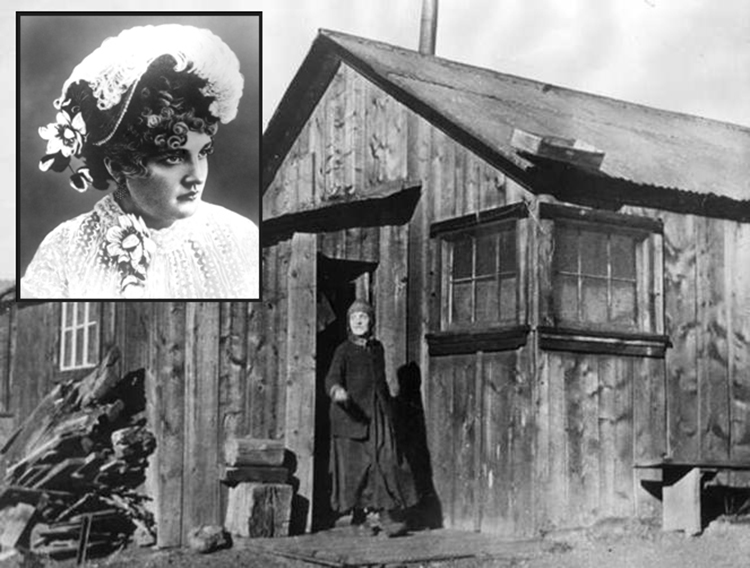 Elizabeth "Baby Doe Tabor" in her prime and at the Matchless in her last years. | Courtesy of mininghalloffame.org.

“The legend of Baby Doe served as inspiration for an opera and even a motion picture. Her story is one of great success and tragic downfall — so often seen in the times of gold rush and the mining boom towns of the West,” concludes VintageNews.com.

Fate of the Family

Baby Doe outlived one of her daughters, but was not in communication with the other at the time of her death, according to babydoe.org.

Daughter Silver Dollar was found dead in Chicago in 1925. Her search for fame in fortune landed her a date with drinking, drugs, and burlesque dancing. She was scalded terribly in a cheap, run-down apartment in Chicago at the age 35 and died (an accident said to have been caused in a drunken stupor or caused by a scorned lover). She had been living under an assumed name amid the down-and-outers of the Windy City.

Lily seemingly disowned her immediate family, marrying a cousin and living a quiet life in the Midwest. Baby Doe visited her in 1911, but that was the last time the two saw each other. When first asked about her mother’s death, she denied being the socialite turned shack-dweller’s child, eventually saying, “I wanted a quiet, decent, sheltered life. Why should I who have pride and position and like only quiet and nice things, have to claim her now in this kind of death.”

Read the first two parts of Our Coloradans Then series: 'The Colorado Cannibal' and 'The Unsinkable Molly Brown'

Adopt One of These 8 Shelter Cats in the DMV This Week, February 28–March 5