Our Coloradans Then: Infamous Outlaws in the Centennial State

Our Coloradans Then: Infamous Outlaws in the Centennial State

From Butch Cassidy to Doc Holliday, Colorado has hosted many a Wild West legend.

Colorado plays a pretty prominent part in the Wild West mythos of our nation. Thanks to the mines, railroads, and wide open spaces, it drew many a pioneering soul trying to make a new life, or just make a quick profit. It's because of the wealth that flowed through the state's ore veins and over train tracks that quite a few infamous outlaws of the day stopped by and stayed a while. From train robbers to famous gunslingers, check out the who's who of outlaws who made a name in the territory that became the Centennial State.

Telluride has the distinguished honor of being the place that Robert Leroy Parker, better known as Butch Cassidy, started his life of robbery. It was here that he and an accomplice robbed the San Miguel Valley Bank for about $21,000. That's around a half million in today's currency. There is a rumor that after his life of robbing trains, banks, and businessman, Cassidy left treasure buried throughout the state. He and the Wild Bunch were said to have buried about $30,000 of silver coins in Irish Canyon, $50,000 near Powder Springs, and more loot on Wild Mountain.

What's the old saying about a woman scorned? Meet Mountain Charley, a.k.a. Elsa Jane Forest Guerin. A memoir of her life detailed that she was married at 12, had two children at 15, and found herself widowed after her husband was murdered by a member of his riverboat crew. This tough pioneer lady literally hunted down that man to California, finally tracking him down in Colorado. Her first revenge attempt didn't take, so she tracked him down again and gave him two more bullet holes for his crimes.

Interestingly, this hardy woman dressed as a man most of her life in order to find work, and she was even promoted to a first lieutenant during the Civil War. 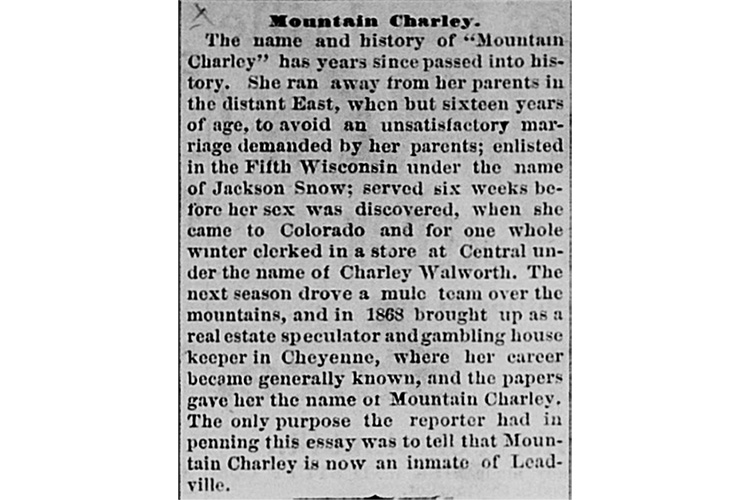 Courtesy of the Denver Public Library.

While some regard him as a lawman and others an outlaw, Wyatt Earp spent some time in the Centennial State. After the O.K. Corral incident, Earp and his wife, Josie, fled to Colorado to hide out. They first made a stop in Albuquerque where they picked up Bat Masterson, who rode with them to Trinidad, the town where he later became City Marshall. Masterson set up a saloon in Trinidad, and Earp actually dealt cards there for a while before heading to Gunnison. The Earps also found themselves in Silverton and other mining camps throughout Colorado.

Most people know that Doc Holliday succumbed to tuberculosis in a sanitarium in Glenwood Springs, but he was a frequent visitor to Colorado. In fact, it was the place that he eventually came to call home while he was trying to leave his past behind. John Henry Holliday first came to Colorado when he was 25 years old, spending a summer dealing cards in Denver during the summer and fall of 1876. He spent time in several other Wild West towns including Tombstone, Ariz., site of the infamous O.K. Corral shootout. After dealing with the fall out from that gun battle, Doc made his way to Pueblo in 1882, then he headed to Denver where he was arrested for murdering a suspected murderer of an Earp brother. During this time, he was facing extradition to Ariz., but his old buddy Bat Masterson, then sheriff of Trinidad, concocted some fake charges out of Pueblo to save him.

After his Pueblo court date, he traveled to Gunnison to visit his buddy Wyatt Earp, then went back to Salida, and finally back to Pueblo for more court dealings. He soon landed in Leadville, where he put down stakes, dealing cards, drinking heavily, and using laudanum to handle the effects of his long-running tuberculosis. It was here that he caught his last murder charge after shooting a man who taunted him at a bar. It was ruled self-defense, and he decided to go back to Denver, where he was once again arrested (on trumped-up charges) and run out of town. After a stint in Arizona, he finally moved to Glenwood to take advantage of the "healing waters." He made it a short few months, succumbing to his tuberculosis in his room at the Hotel Colorado. He is buried in Linwood Cemetery. 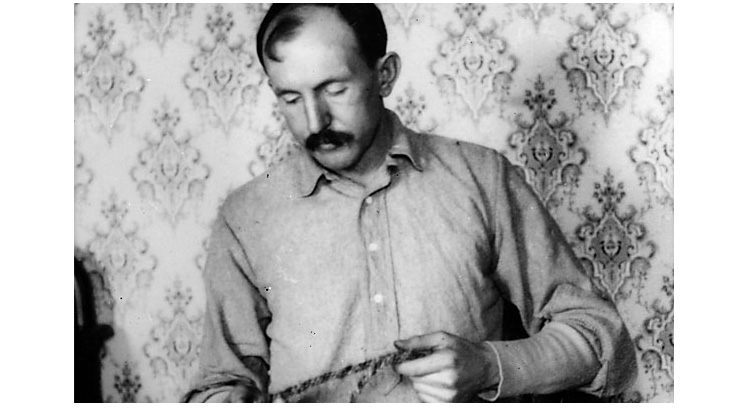 A straight-out killer who enjoyed nothing more than to take the law into his own hands, Horn's story ends at the end of a hanging rope. Horn was a gun for hire who often went under the guise of a lawman, Pinkerton agent, or Marshall. He made his living hunting down cattle rustlers, which he promptly murdered rather than turning them over to the real law. He was an integral figure in the Colorado Range War, shooting, hanging, and burning his way through homesteads and new ranchers in Colorado and Wyoming.

He was finally brought to justice after killing 14-year-old Willie Nickell and bragging about killing a Marshall, Horn was sentenced to hang in Cheyenne, Wyoming. Colorado serves as his final resting place, however. He was laid to rest in Boulder's Columbia Cemetery on request of his brother.

Outlaws weren't only men. Jane Kirkham was rumored to be the only female stagecoach robber of her time. Her love of gold and wealth took her on a crime spree that ended in an ironic twist. Legend has it that during one robbery on the stage trail between Leadville and Buena Vista, she was shot by the local sheriff. That sheriff buried her right on the trail out of shame. Why? In addition to being the law, he also happened to be Jane's husband.

More a lawman than lawless, Masterson was able to walk the line between "good" guys and "bad" guys. A key figure in the railroad wars in Colorado, Masterson's influence in the state was first felt before he even came here. As a sheriff in Kansas, he was enlisted by the Santa Fe Railroad to recruit men for the Royal Gorge Railroad War. The next time he shows up, he is appointed as City Marshall of Trinidad. It was in this capacity that he was able to prevent Doc Holliday from being extradited to Arizona. Masterson went straight to Governor Pitkin who eventually denied the extradition. But, this incident, as well as Masterson's penchant for dealing faro in his off hours, ended his career as City Marshall.

After a stint in Dodge City, Master came back to Colorado and settled in Denver. He dealt faro, was at the center of a scandalous affair, possibly married, and also teamed up with Soapy Smith to commit election fraud. He also showed an interest in prizefighting, which eventually led to a successful journalism career in New York City. His last hoorah in Denver came in 1897 after a stint in New York. He was serving as a deputy for Arapahoe County, and during a scuffle on election day, accidentally shot a bystander.

Slade was not a man to cross. A stage driver on the Overland Trail, he generally held a demeanor of a presentable gentleman. He dressed in fine attire and was generally liked by those he met. Unless he was on a whiskey jag. When he was in his cups, so to speak, he wasn't a kind fellow. At all. In fact, he is thought to be responsible for around 26 murders across the Colorado Front Range.

A con man extraordinaire, he was the slipperiest criminal in 1880s Denver. His biggest outward cons were the shell game and his namesake, selling soap that he claimed may contain a $20 or $100 bill. You can probably guess that none of those bars of soap contained anything except lye; he sold nickel soap for $5, and the buyer got scammed. He really cleaned up with saloons, gambling halls, and several other establishments that specialized in cheating clients, really rising to crime boss status.

At one point, he was in charge of all but one of the 40 saloons in Creede, that remaining one being owned by Bat Masterson. Masterson also happened to be his co-collaborator in the infamous Denver registration and election fraud of 1889. Soapy was well-known and widely unwelcome in many western towns, and his life of crime ended in Alaska at the age of 38.

Read the previous article in our Our Coloradans Then series: JonBenét Ramsey -- An unsolved Christmas tragedy.

Visit our homepage to see all the latest happenings in Colorado!