Our Coloradans Then: The Fight Over Buffalo Bill's Final Resting Place

Our Coloradans Then: The Fight Over Buffalo Bill's Final Resting Place

Buffalo Bill met his end in Denver, and we've been in a feud with Cody, Wyo., ever since.

His life was the stuff of western legend. Pretty literally. Many know his tales of scouting for the Army and eventually becoming the famed entertainer who spread his version of the American West throughout the U.S. and even overseas. Many have also likely visited the Buffalo Bill Museum & Grave on Colorado’s Lookout Mountain.

But, as he wasn’t born in Colorado (he was born in Iowa), and spent much of his life traveling throughout the West and beyond, many may also be wondering how his final resting place came to be in our great state. Well, that’s a tale of bad business deals, death, and a grave fight over his burial.

Like most early travelers to the state, he first came to Colorado’s gold fields to strike it rich. And, like many, he left with nothing to show for it.

“In spring of 1859, Buffalo Bill made his first trip to Colorado as part of the Pikes Peak Gold Rush. He passed through the new town of Denver on his way to the gold fields near Black Hawk where he searched for gold for two months, meeting with little success,” says buffalobill.org.

With empty hands and empty pockets, he fairly quickly made his return to Kansas, where he previously lived. On the way, he happened to stop in Julesburg and was recruited to ride in the ever-revered Pony Express. While he spent most of his time riding routes in Kansas, he occasionally traveled through Colorado and cut north into Nebraska and Wyoming.

It wasn’t until 1872 that he made his stage debut in Chicago, performing in a drama created by dime novelist Ned Buntline. Called "Scouts of the Prairie," it was generally a success and proved Buffalo Bill to be a showman. He soon organized his own troupe, the Buffalo Bill Combination, which featured fellow scouts and even Wild Bill Hickok in its early days.

Buffalo Bill brought that show to Denver in the 1870s to perform in a Denver opera house, as well as the Central City Opera House, among other locations. The rest, you might say is history, as he went on to organize that initial show into the Wild West Show that he grew to become so famous for. The Wild West show, and Cody himself, visited Colorado many times during its run.

“Altogether, Buffalo Bill performed 35 times in Colorado between 1886 and 1916,” according to buffalobill.org. 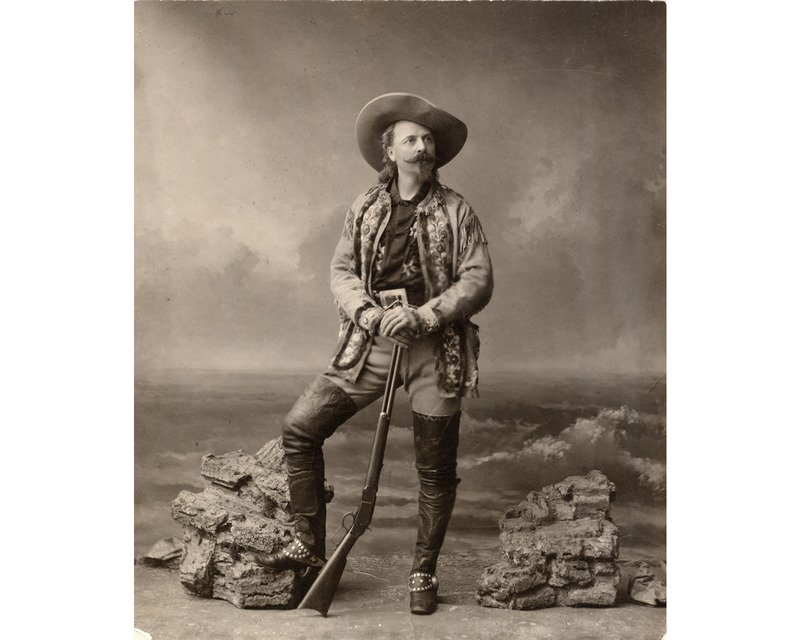 While he seemed to enjoy the state and Denver, they proved to be the location of the proverbial final shootout for the Wild West show and the eventual site of his demise.

Denver: The End of the Wild West

According to the Buffalo Bill Museum, in 1913, Bill borrowed money to fund his Wild West show in 1913 from a Denver businessman named Harry Tammen, who was a co-owner of the Denver Post. This would prove to be his undoing, as he had not realized the loan would be used to force him to appear in Tammen’s Sells Floto Circus and be the ruin of the Wild West.

Buffalo Bill, unfortunately, fell behind in payments on the loan,  and when the Wild West stopped in Denver to do a show that summer, Tammen had the whole production seized for back payments. It was the end of an era.

“The Wild West was sold off at auction in Denver’s Overland Park and Cody was forced to join the Sells Floto Circus. Eventually, he got out of that contract but was never able to re-build his Wild West,” relates the buffalobill.org.

Things to do in Denver When You're Dead

Denver struck yet another, and very final, blow in Buffalo Bill’s saga in January of 1917. While visiting his sister’s home, he passed away from what has been suspected as kidney failure. According to his wife Louisa, it was his last request to be buried on Lookout Mountain overlooking the plains of the West. Several close friends, as well as the priest who performed last rites, corroborated that story.

Because he died in the middle of winter, the ground was too frozen to dig a grave. Instead, his body was preserved in cold storage at Olinger’s Mortuary, where he was embalmed six times until the conditions permitted burial.

“Interestingly enough, Olinger’s Mortuary is now Linger restaurant. Folks can now eat in the spot where the old scout was embalmed. A little macabre, but still fun,” says the Denver Public Library.

Buffalo Bill was finally interred in his resting place on Lookout Mountain on June 3, 1917, with thousands in attendance. 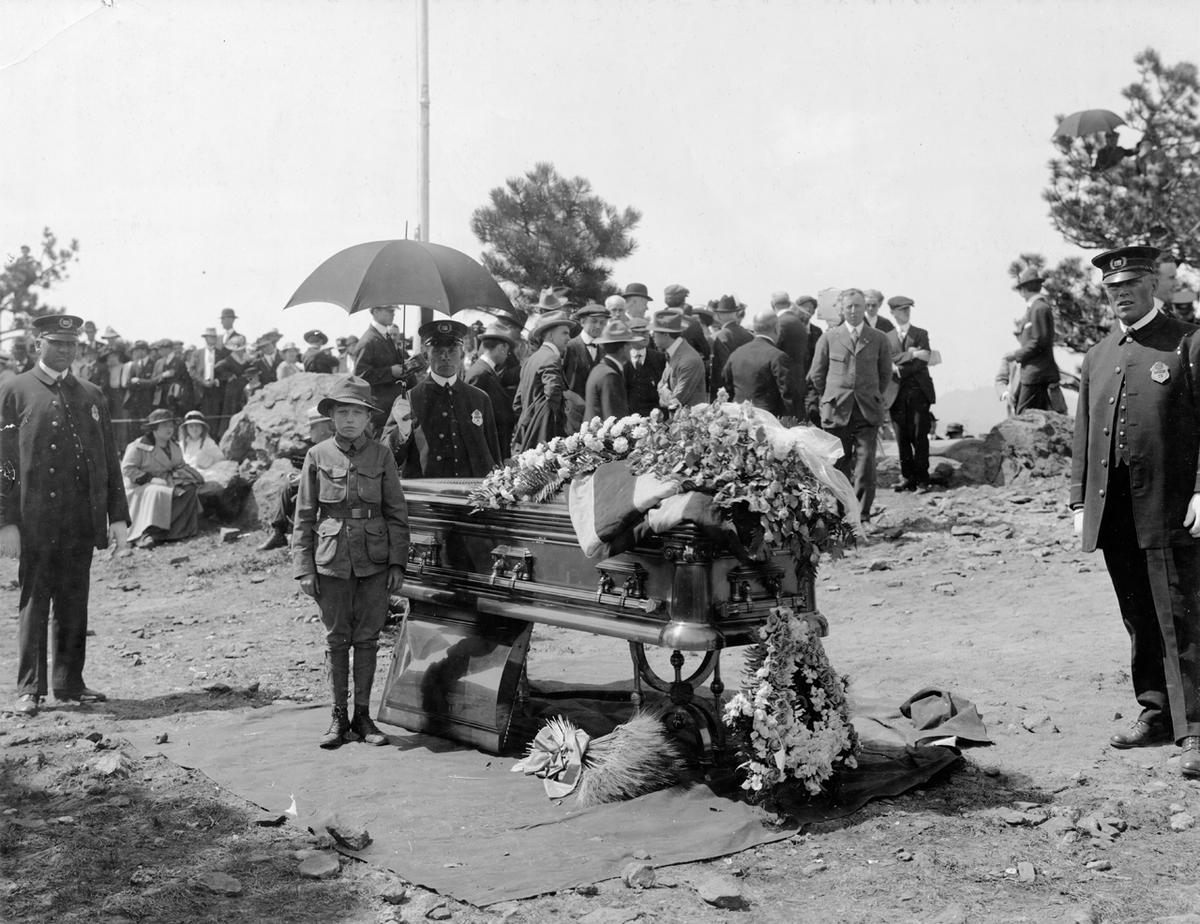 However, his burial was not without controversy. The people of Cody, Wyo., claimed that he wished to be buried in their humble berg, a town that he actually founded. According to the Denver Library, there is some validity behind that claim, as an original will drafted by Buffalo Bill stated he wanted to be buried somewhere on Cedar Mountain outside of Cody. There appears, however, to be an updated will where he specified that he wanted to be buried atop Lookout Mountain with what he felt were the most spectacular views in all of the West.

Rumors, inflamed by the will situation, as well as Bill’s own niece, spread like wildfire. It was said that Colorado officials conspired to keep Buffalo Bill’s body in the state by bribing family members for their own gain.

There is even a theory that says Buffalo Bill is actually buried in the Cowboy State, and not in Colorful Colorado, says the Denver Library. According to legend, sneaky stealers from Wyoming took Bill’s body from the funeral home and replaced it with a local look-alike vagrant. The LA Times even investigated the legend, which Colorado's Buffalo Bill Museum officials declare is so much bunk.

But the rumors have taken their toll over the years.

The graves of both Buffalo Bill and his wife Louisa, who is buried beside him, were encased in concrete to prevent any theft attempts. The Colorado National Guard was even called out to guard the graves in 1948 when Cody American Legion members offered a reward to whoever could steal Buffalo Bill’s body and bring him back to Wyoming.

Today, things seem to be more civil between all Buffalo Bill fans, at least until another conspiracy arises. You can learn more about the “Son of the West” and his Wild West show by visiting the Buffalo Bill Museum & Grave in Golden for yourself. Founded in 1921 by Johnny Baker, a close friend and unofficial foster son to Bill, it is one of the top visitor attractions in the state today and is packed full of history to explore.

Read more about the life and legacy of Clara Brown here.