Stranded, snowbound and starving, was Packer a murderer or just making the best of a bad situation?

To be called Alferd Packer’s “favorite” friend may have had a whole different meaning in 1874. While there are many details of this tale, the basics are detailed below.

*Warning: This story is not for the faint of stomach.*

A gold prospector and former Union soldier, Packer was tasked with leading a party of 21 men bound for the goldfields near Breckenridge. They left Bingham Canyon, Utah, in early November 1873 and headed straight into a winter nightmare. Three months of tackling an unusually harsh winter, the company wearily walked into the camp of Ute Indian Chief Ouray, near Montrose. They should have stayed.

“The Utes graciously provided the hungry and exhausted men with food and shelter. Chief Ouray advised the men to stay in the camp until a break came in the severe winter weather, but with their strength rekindled by food and rest, Packer and five other men decided to continue the journey,” said History.com.

Flash forward two months when a relatively spry Packer arrived at the Los Pinos Indian Agency near Gunnison, claiming he was separated from his party and survived on rabbits and rosebuds. He claimed to be broke and sold his Winchester rifle for some money, said he wanted to get back to his home state of Pennsylvania and headed to Saguache to buy supplies. While in Saguache, he spent what was a small fortune, several hundred dollars. He also appeared to have items belonging to the missing men. Suspicions were more than piqued.

After interrogation, he eventually confessed that four of the men had died along the trail from the winter conditions, and the remaining travelers (Packer and a man named Bell) ate them to survive. He claimed Bell eventually went insane, so he shot him in self-defense and ate him, for survival, of course.

“I would sintince ya ta hell, but the statutes forbid it.”

Oddly, the gruesome cannibalism might not have been a huge deal, as while tragic, it wasn’t unheard of during the era. But, when the remains of the five men were found in a single campsite (not along the trail), Packer was arrested for murder. In a move that certainly proved his innocence (not!), he escaped jail and remained at large for nine years.

He was recaptured in Wyoming, and Packer’s first trial was in the Hinsdale County Courthouse in Lake City. He was singing a different tune this time around. He claimed he had gone hunting for the trail and returned to a camp full of dead men, slaughtered at the hands of Shannon Bell. Bell, it seems, was boiling flesh for a juicy meal when Packer arrived and charged at him with a hatchet. Packer shot him and only resorted to gnawing on his fellows when survival necessitated it. 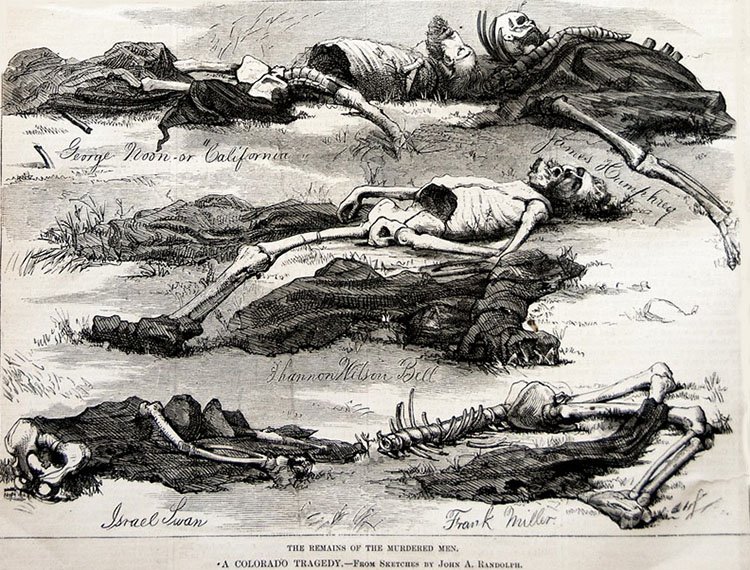 This second story didn’t fly, and he was convicted of manslaughter and sentenced to hang in May of 1883. According to the Alfred Packer: The Maneater of Colorado, Judge M.B. Gerry laid down this nugget during sentencing (as printed in a local newspaper):

“Stand up yah voracious man-eatin' sonofabitch and receive yir sintince. When yah came to Hinsdale County, there was siven Dimmycrats. But you, yah et five of 'em, goddam yah. I sintince yah t' be hanged by th' neck ontil yer dead, dead, dead, as a warnin' ag'in reducin' th' Dimmycratic populayshun of this county. Packer, you Republican cannibal, I would sintince ya ta hell but the statutes forbid it.”

Eventually, that conviction was overturned, and Packer was granted a new trial in Gunnison. He was convicted of five counts of murder and was sentenced to 40 years in the state penitentiary at Canon City. He never waivered on maintaining his innocence.

Guilty or Not Guilty?

According to LakeCity.com, a team of archaeologists and forensic scientists descended on Lake City in 1989 to “dig” into the case. They unearthed the graves of the five men who had been murdered 115 years earlier and took them to the Human Identification Lab in Tucson, Ariz.

The results: these men were indeed cannibalized and met violent deaths. That could support Packer's second story, putting the blame on Bell. The gunshots on Bell’s body did appear to match his claims. Or, he could have murdered them all himself. We’ll never know.

“The remains were then returned to Lake City and reinterred on August 15, in a multi-denominational service. The bones from each skeleton were placed in one of five compartments in a single wooden box. The remains of those five prospectors again rest peacefully on the bluff overlooking the Lake Fork,” said the site.

In three words: it was short. Packer was paroled in 1901, after a series of Denver Post articles by reporter Polly Pry questioned his guilt, he relocated to the Denver area, where he lived until his death in 1907. He reportedly was a vegetarian.

“Packer went to work as a guard for the Post and lived quietly in and around Littleton, Colo., maintaining his innocence until the day he died,” according to History.com.

His infamy has reached beyond just the state, the Washington Times even posted an article when he died with the headline “Colorado’s ‘Man Eater’ Dies on Lonely Ranch Before Pardon Comes.”

Today, you can visit Packer’s grave in the Littleton Cemetery. Thanks to grave vandals and robbers, it has been cemented over, but his headstone marks the spot where Colorado’s most (alleged?) notorious meat eater rests in peace. 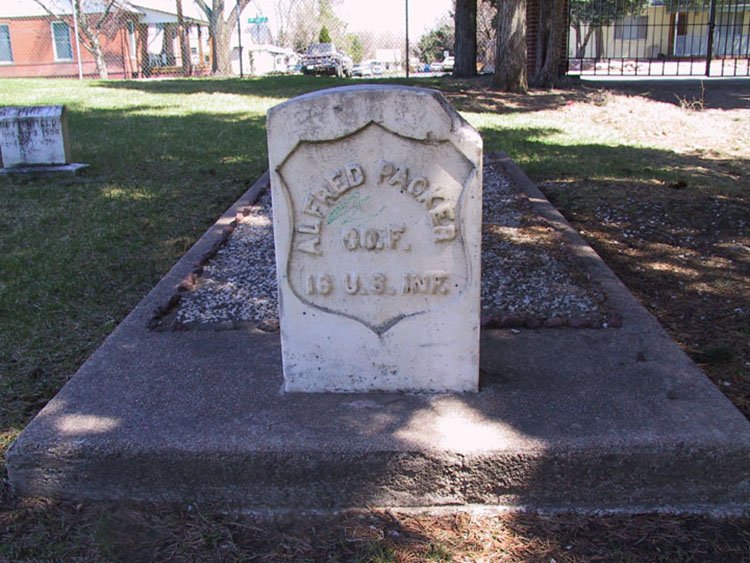 What do you think? Are there other famous historical figures in Colorado you'd like us to cover next? Let us know in the comments below.