The award-winning actor grew up in Columbia, Maryland, and started acting by the age of 8.

One of his generation's most renowned actors, Edward Norton has energized audiences with his charismatic roles across well-known films like The People vs. Larry Flynt, American History X, and Birdman. Despite being born in Boston, Norton's formative years were spent in Columbia, Maryland, where he first developed his passion for theater. Find out more about the award-winning actor down below!

Edward Norton was born in Boston, Massachusetts on August 18, 1969, as the oldest of three siblings. His father was an environmental lawyer, while his mother taught English. As a young child growing up in Columbia, Maryland, Norton became enamored by the theater. By the time he was 8, he was acting in local productions at Toby's Dinner Theatre and was star-struck witnessing a performance of Acting Shakespeare starring Ian McKellen. He studied history and Japanese at Yale University before moving to New York City to make his professional foray into acting. He acted in productions by playwright Edward Albee as part of the Signature players at the Signature Theatre Company.

Norton's breakthrough role was 1996's Primal Fear, garnering a Golden Globe Award for Best Supporting Actor. The same year he starred in Everyone Says I Love You and The People vs. Larry Flynt as the lawyer Alan Isaacman. In 1998, he starred in American History X as reformed neo-nazi Derek Vinyard, which impressed critics and audiences alike and earned him an Oscar nomination for Best Supporting Actor. He also provided the elusive narration for the film Fight Club (1999). 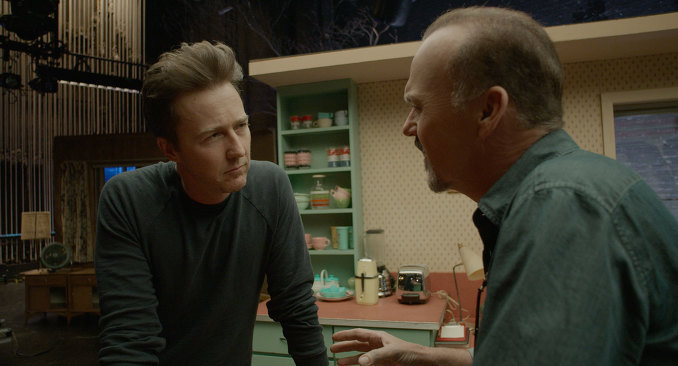 Norton alongside Michael Keaton in Birdman, courtesy of IMDb

Throughout the 2000s, he lent his talent towards some of the millennium's biggest films. He held his own alongside Robert De Niro and Marlon Brando in The Score (2001). He portrayed Nelson Rockefeller in the biopic Frida and even contributed to the film's critically-acclaimed screenplay. He's appeared in three of Wes Anderson's films: Moonrise Kingdom (2012), The Grand Budapest Hotel (2014), and Isle of Dogs (2018). He was also nominated for an Academy Award for his role in Birdman as an egotistical Broadway actor. While Norton's reputation as an actor is mainly positive, he's faced scrutiny for problematic behavior on the set, like re-writing scripts without permission.

In addition to acting, Norton has also shown an interest in directing. Recently he adapted the novel Motherless Brooklyn by Jonathan Lethem into a film. The cast includes himself as the starring role, along with Gugu Mbatha-Raw, Alec Baldwin, and Willem Dafoe. He's a committed environmentalist, as well as a board member for Enterprise Community Partners, a housing development nonprofit started by Norton's grandfather James W. Rouse. It's also the same nonprofit that essentially created Columbia, Maryland, in 1967—You can't get any more local than that!

Anyone here fans of Edward Norton? What's your favorite role? Let us know in the comments!