The Olympic superstar and Baltimore native is this week's featured Marylander!

For over 20 years, Michael Phelps has stunned the world with his otherworldly swimming. At 6'4 with a top speed of six miles per hour, the Olympic champion made history with a staggering 28 medals, becoming one of the world's most celebrated athletes. Did you know he was born and raised in Maryland? Read more about the decorated swimmer below!

Michael Phelps was born in Baltimore, Maryland, on June 30, 1985. Along with two older sisters, he was raised by his father, a state trooper, and his mother, a school principal. He grew up in Towson's Rodgers Forge neighborhood, where he attended Dumbarton Middle School and Towson High School. His parents got a divorce when he was 9, and he lived with his mother and sisters.

Phelps began swimming as a hobby at 7 years old, and he quickly fell in love with it. He spent his days swimming at North Baltimore Aquatic Club and met Bob Bowman, who would become his coach. At 15, he swam on his first Olympic team during the 2000 Summer Olympics in Sydney, Australia, becoming the youngest person in over half a century to do so. In 2001 he also became the youngest person to set a world record for the 200-meter butterfly. From there he participated in the 2002 Pan Pacific Championships, the 2003 World Championships, and the 2004 Summer Olympics in Athens, where he scooped up eight medals. 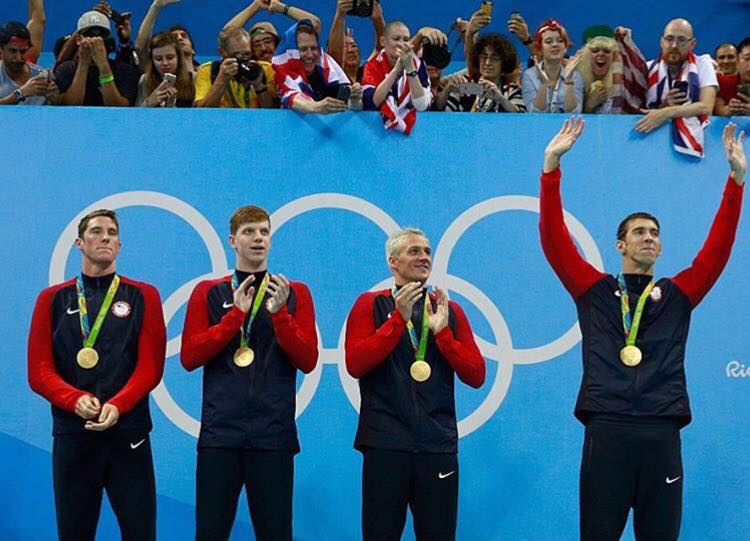 During the 2008 Summer Olympics hosted in Beijing, Phelps won eight gold medals and his 14th overall gold medal, breaking American swimmer Mark Spitz's 1972 record for most medals won during an Olympics game. At the 2012 Summer Olympics in London, he won four gold and two silver medals, making it his 22nd medal. Phelps announced his retirement in 2012 but returned for the 2016 Summer Olympics in Rio, where he carried the American flag during the opening ceremony. He became the first Olympian to be on five Olympic teams—a startling achievement!

During his career, Phelps has experienced personal struggles. He's been arrested twice in his home state—in 2004 and 2014—for driving under the influence and has spoken openly about depression, particularly after the 2012 Summer Olympics. Phelps has advocated on behalf of mental and physical health resources through philanthropic means. He's the founder of the Michael Phelps Foundation, which focuses on the importance of healthy habits and exercise for young children. He also has a popular water safety program called IM that can be found in the Boys & Girls Club of America and the Special Olympics.

The retired athlete lives with his wife Nicole Johnson and their three sons Boomer, Beckett, and Maverick. The family had lived in Paradise Valley, Arizona before recent reports showed they put the $2.5 million home for sale. Not bad for an Olympic champion!

Is anyone here fans of Michael Phelps or the Olympics as a whole? What other figures would you like to read about? Share them with us in the comments!