The celebrated abolitionist taught himself to read and then escaped the clutches of slavery in Maryland.

Frederick Douglass was many things in his life: an author, an abolitionist, an orator, a statesman. He fought for the rights of African-Americans, Native Americans, women, and immigrants. He wrote and delivered searing lectures condemning slavery, as well as promoting equality for all Americans. But did you know his history began in Maryland? His autobiography, Narrative of the Life of Frederick Douglass, an American Slave (1845), detailed his life born into slavery on Maryland's Eastern Shore, where he eventually escaped to freedom and made his mark on the country as an activist for human rights.

Frederick Augustus Washington Bailey was born in February 1818 (his exact birth date was never known, but he chose to celebrate on February 14) on the Eastern Shore in Talbot County, Maryland. Harriet Bailey, his mother, was of Native American and African descent and his father was white (and most likely his master). He lived with his grandmother for a short time before being separated and sent to the Wye House Plantation. He was enslaved under Thomas and Lucretia Auld, who then sent him to Thomas's brother Hugh Auld in Baltimore.

Frederick Douglass taught himself to read, eventually leading Sunday School lessons where he taught slaves to read from the Bible's New Testament. As punishment, Thomas Auld sent Douglass to Edward Covey, a violent overseer who brutally tortured Douglass (he was known as a "slave breaker"). With the help and encouragement of his partner, free woman Anna Murray, Douglass finally escaped on September 3, 1838, through the Philadelphia, Wilmington, and Baltimore railroad (P.W.&B), located in the neighborhoods now known as Little Italy and Harbor East in Baltimore. The two met in New York City, then moved to Massachusetts where Douglass began his career as a preacher and abolitionist. They changed their last name to Douglass, as inspired by the Walter Scott poem The Lady of the Lake. 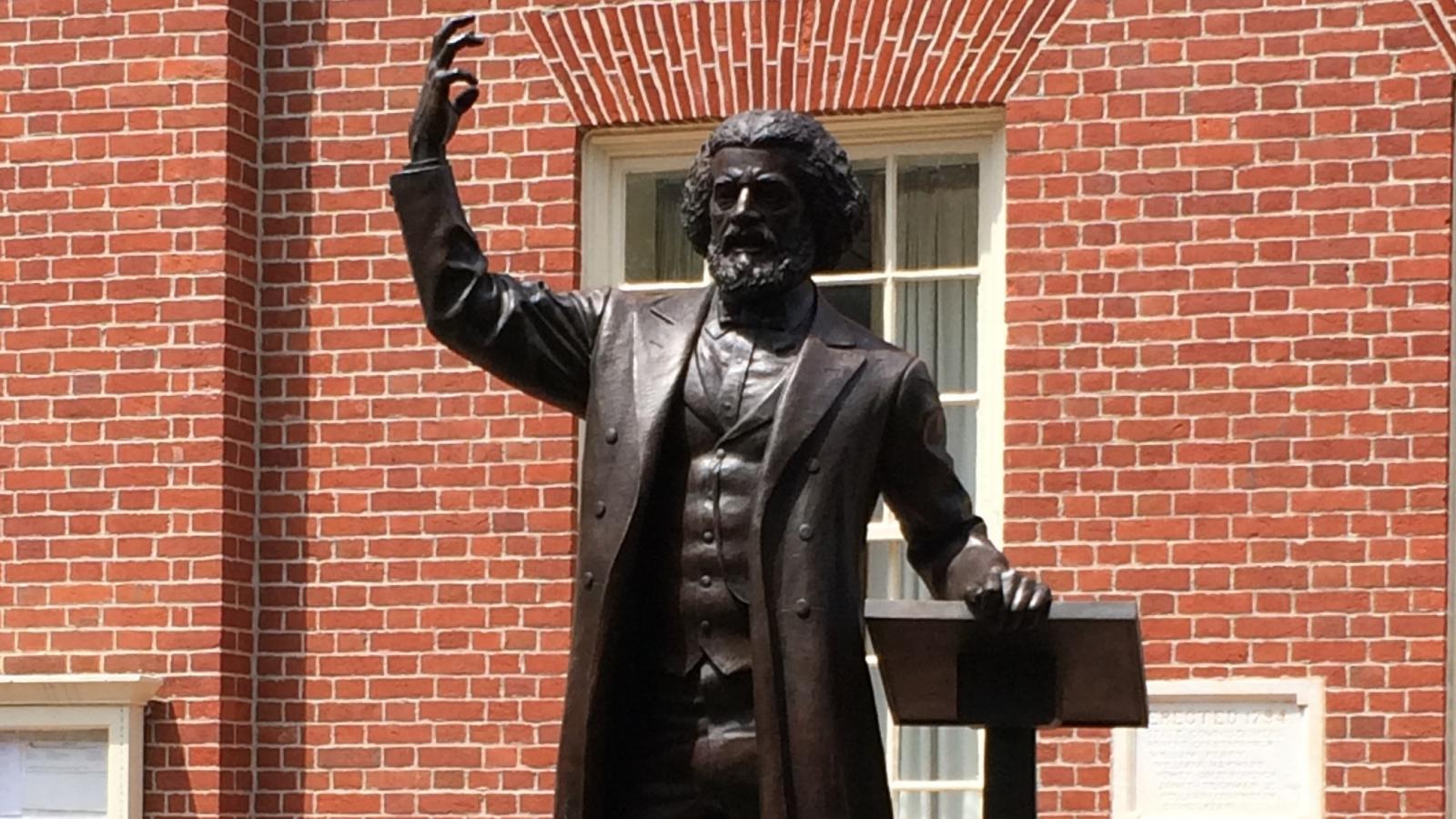 He published two other works, titled My Bondage and My Freedom (1855) and Life and Times of Frederick Douglass (1881, 1892). Douglass took his speeches abroad and toured Ireland and Great Britain, where he impressed audiences with his powerful oration. He spoke at the Seneca Falls Convention in New York, the first women's rights convention in the country. He was an advisor to President Abraham Lincoln, lending counsel on issues related to emancipation and equal rights for African-Americans. He was also the first African-American to be nominated for Vice President of the United States.

Douglass died in 1895 of a heart attack, following a National Council of Women's meeting in Washington, D.C. He was 77 years old.

Douglass's legacy still lives on today. In Easton, Maryland, Talbot County Courthouse honored the statesman with a seven-foot bronze statue, and in February 2018, Maryland celebrated Douglass's 200th birthday with bicentennial events across the state in Annapolis, Baltimore, and the nation's capital. You can also visit Douglass Place in Baltimore's Fells Point neighborhood, the housing complex Douglass had built for African-Americans in 1892. The National Register of Historic Places recognized it as a landmark in 1983.

Frederick Douglass was one of the most prominent figures of the nineteenth century. Who are some other Marylanders we should cover? Tell us your picks in the comments below!