Lincoln's assassin was a prominent actor from Maryland.

John Wilkes Booth is one of the most infamous figures in American history. An actor from a famous family, he assassinated Abraham Lincoln, the 16th President of the United States. This event shaped history for years to come and cemented Booth's dark legacy. Yet many may not realize how much of this historical event, and the person responsible for it, took place right here in Maryland.

John Wilkes Booth was born on May 10, 1838, at Tudor Hall in Bel Air, Maryland. He had nine other siblings and came from a renowned family of actors, most notably his father Junius Brutus Booth, the esteemed Shakespearean actor. Booth began his acting career at the age of 17, and by the 1860s he was going on tours across the Northern and Southern United States. His portrayals of the title character of Shakespeare's Richard III, Hamlet, and Romeo in Romeo and Juliet earned him critics' praise and cemented his stardom as a leading actor of the era. He was a bombastic performer, known for physical comedy and attention-stealing stunts.

He became a celebrity in his own right, with the Boston Transcript describing him as "the most promising young actor on the American stage." He even performed at Ford's Theatre when it opened in 1863.

Booth was also a supporter of the Confederacy. He opposed abolition and despised Abraham Lincoln and his efforts to emancipate slaves. This garnered scorn with the northern states where he performed, even getting arrested in St. Louis for saying he "wished the President and the whole damned government would go to hell." With the Confederacy losing the war and Lincoln's reelection in 1864, Booth's hatred took a dark turn. Originally he conspired to kidnap the president, but as the Confederate Army's standing dwindled, the plot changed to murder. He employed Confederate sympathizers Lewis Powell and George Atzerodt to assist him in murdering Lincoln, along with a few others. 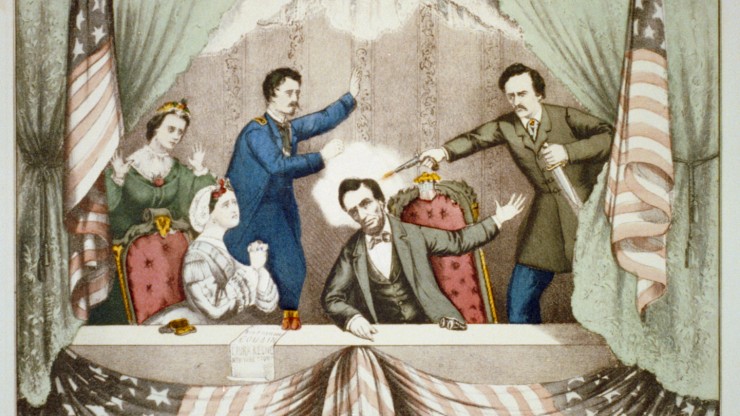 An illustrated depiction of Lincoln's assassination, courtesy of Library of Congress

On April 14, 1865, Booth found out that President Lincoln would be attending a show at Ford's Theatre that very night alongside his wife Mary Todd and Major Henry Rathbone and Clara Harris, his fiancee. Since Booth was a regular at the venue, his presence was not unfounded. Around 10 p.m., he snuck into the presidential box and shot the president with a .41 caliber Deringer pistol. He shouted "sic semper tyrannis" (which means "thus always to tyrants") though others claimed to have heard  "I have done it, the South is avenged!" President Lincoln died at 7 a.m. the next morning.

Booth rode through southern Maryland, with the goal of reaching Virginia by crossing the Potomac River. During this time, he read newspaper coverage detailing the aftermath and was crestfallen to find his actions did not elicit his expected response. It took 12 days for troops to catch Booth in a barn near Port Royal, Virginia, where he was shot by Sergeant Boston Corbett. He was 26 years old.

Today Ford's Theatre has become a living tribute to Abraham Lincoln's legacy. In addition to its itinerary of shows, the D.C. venue offers informative exhibits and tours about Lincoln's assassination. Booth's grave is located at Green Mount Cemetery in Baltimore, where he lies in the family plot. The National Museum of Health and Medicine in Silver Spring has bones from Booth's autopsy on display. You can even visit Booth's former home Tudor Hall in Harford County, which was recognized in 1973 by the National Register of Historic Places.

Did you know John Wilkes Booth was from Maryland? Did you learn anything new about him? Give us your thoughts in the comments – we'd love to hear from you!