Our Marylanders Then: Upton Sinclair

Our Marylanders Then: Upton Sinclair

His novel The Jungle shocked readers and inspired political change upon publication in 1906.

You may be familiar with the phrase "It is difficult to get a man to understand something when his salary depends upon his not understanding it." You may have also heard of the term "muck-raking" journalism. These are both associated with the writer Upton Sinclair, who used the novel to explore societal injustices like poverty and labor abuses. He was also a Maryland native!

Upton Sinclair was born on September 20, 1878, in Baltimore, Maryland. He grew up poor in a row house on North Charles Street within a dysfunctional family. Though he moved often, his time in Baltimore was formative on his life, shaping his love of reading, especially Shakespeare (he read his entire works in two weeks). By contrast, his extended family was wealthy, with one set of grandparents living close by on Maryland Avenue. This divide between poverty and wealth would have a massive impact on Sinclair, inspiring the pro-labor, anti-capitalist views present in his writing.

Sinclair attended multiple colleges, including Columbia, and supported himself by writing dime novels. In 1904, Sinclair went undercover at a Chicago meat plant for seven weeks in preparation for what would become his novel The Jungle. Set in Chicago at the turn of the century, it documents a Lithuanian family struggling to achieve the American dream and the grotesque conditions of the meat-packing industry, where the central character Jurgis Rudkus works. 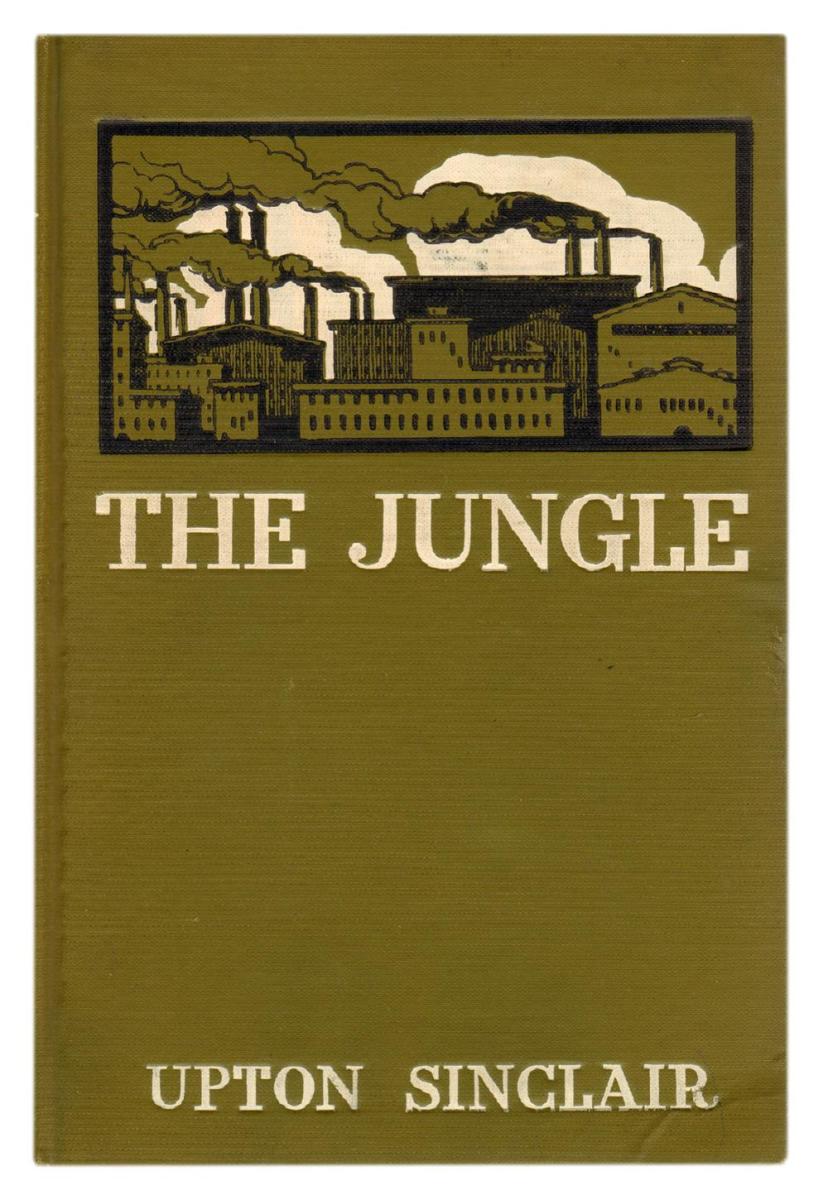 First-edition cover of The Jungle, courtesy of History

Sinclair sought to expose the injustices immigrants faced in the United States, but many readers were horrified by the book's stomach-churning descriptions of the meat-packing plants. Of the book, he said, "I aimed at the public's heart, and by accident, I hit it in the stomach."

Shortly after it was published, President Theodore Roosevelt signed the Pure Food and Drug Act and Meat Inspection Act of 1906 into law.

In addition to writing, Sinclair was also an activist, rallying for the rights of workers and laborers. He was responsible for forming the California chapter of the ACLU and even ran for state governor in 1934, running under the campaign "End Poverty in California." He lost to Frank Merriam.

Over the course of his life, he got married three times and had one child. Sinclair died on November 28, 1968, from natural causes in Bound Brook, New Jersey. He was buried at the Rock Creek Cemetery in Washington, D.C.

Sinclair was a prolific writer; he wrote close to 100 books, including plays and non-fiction pieces. He also won the Pulitzer Prize for his 1942 novel Dragon's Teeth. In recent culture, his 1927 novel Oil! was adapted for the 2008 film There Will Be Blood, which won two Academy Awards out of eight nominations.

Did you know Upton Sinclair was from Maryland? Who else would you like to read about? We'd love to hear your thoughts in the comments!