Animas Forks is one of Colorado’s many ghost towns. Located in the San Juan Mountains, this one is incredibly well-preserved.

Located on what is known as the Alpine Loop—a 65-mile stretch of unpaved roads that connects Silverton, Lake City, and Ouray—the once-bustling community of Animas Forks sits at an elevation of 11,200 feet. This peaceful spot high up in the peaks was once home to a bustling little community of miners and business folk trying to survive life.

There's a lot of history buried up in Animas Forks—the mining community faced severe weather, declining success at the mine, a devastating fire that burnt down a good portion of the town in 1891, the silver crash of 1893 that caused some disheartened families to leave, and another fire in 1913, all of which contributed to the success and downfall of the mining camp-turned-ghost town.

The first log cabin was constructed in the town in 1873, which was originally called the Three Forks of the Animas, in reference to the three rivers that merge close to the site. The little town grew and was a thriving community after a few years; it had its own newspaper, the Animas Forks Pioneer, as well as a saloon, a hotel, three general stores, two boardinghouses, a post office, a butcher, and about 30 cabins. The town claimed itself to be the "largest city in the world" on a sign nearby, but added, in small type, "at this altitude."

Most residents would head to Silverton for the colder snowy months due to its warmer temperatures leaving the town almost empty. The town was said to be cursed by avalanches and suffered severe weather during the winter months. Not everyone would migrate and, in 1884, those who wintered in the town were hit with a blizzard that lasted for 23 days. The storms left Animas Forks covered in 25 feet of snow, an entire town buried on the mountain. Because the doors were all sealed shut from snow, townsfolk opened windows to get outside. The miners did what they knew best and dug tunnels to get from building to building, including tunnels to the store and saloon (a very important spot to all). Residents boiled the melted snow and used it as water for cooking, cleaning, and bathing. 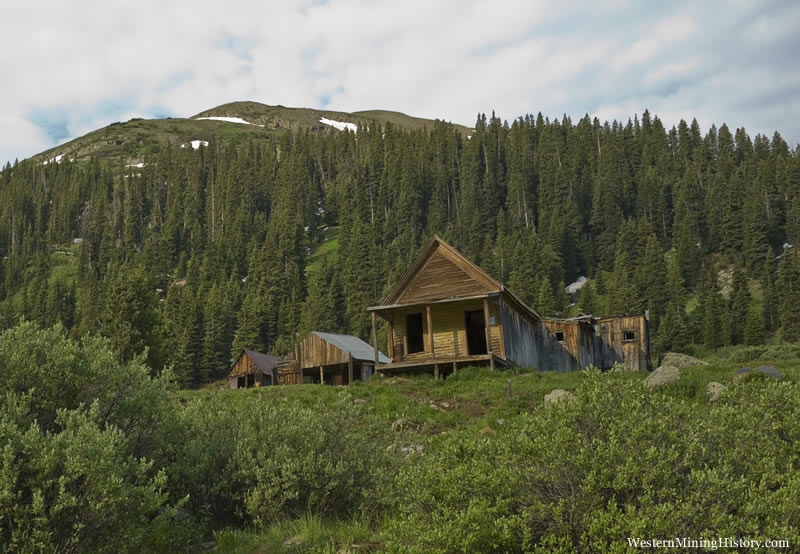 The little mountain settlement was lively for many years, but by the 1900s it had started to slow down as mining profits began to decline. In 1904, a new breath of life was brought to the town with the construction of the Gold Prince Mill and a railroad that came through town. Then, in 1910, the mill closed and some folks hung around a few more years. However, just seven years later, the mill’s major parts were taken to a new facility in the nearby town of Eureka, itself now a ghost town. By 1920, Animas Forks was completely abandoned, nothing more than empty structures and memories remaining.

Animas Forks has stayed surprisingly well-preserved all this time and has grown into quite the tourist attraction. The Bureau of Land Management, along with a grant from the Colorado Historical Fund, allowed for the structures still standing to be stabilized in the late 1990s. The townsite was named in the National Register of Historic Places in 2011 and further restoration and stabilization were done in 2013 and 2014.

Nine buildings are still standing today, as well as the foundations for some 30 other structures that once made up the town of Animas Forks.

Visitors to the ghost town can walk into the structures and all through town, and really explore, take pictures of the surrounding scenery, and get a feel for what it was like to live in Animas Forks. Getting there is not a quick drive, though, so four-wheel drive or off-road vehicles are highly recommended—the 12.3-mile route off the highway is on an unpaved dirt road and is not passable by sedans or passenger cars. There are guided Jeep tours from Silverton that take visitors up to see the area, as well.

This little mountain hideaway is a slice out of time, showing us another kind of life that was lived here in the Centennial State. This is one of the most well-preserved ghost town sites in the state and if you are into checking out the past, Animas Forks should be on your list of must-see places.

Have you visited Animas Forks yourself, or any other notable ghost towns here in Colorado? Are there any other well-preserved spots that we should know about? Give us the rundown in the comments.

Fact: More Americans Go to the Library Than to the Movies