Survey: How We Communicate at Work in the US Is Different Than in the UK

Survey: How We Communicate at Work in the US Is Different Than in the UK

Here's what we really think of our colleagues across the pond—and what they think of us.

Britons, as it turns out, tend to take things more negatively, whereas Americans tend to be more positive. For example, the survey quotes the phrase “let’s do lunch soon.” Britons were more likely to find this a dismissive statement rather than a sincere invitation for lunch. Almost half the Americans on the other hand (48 percent) felt this was a positive statement.

Here are some other statements that had quite a different perception between the two groups: 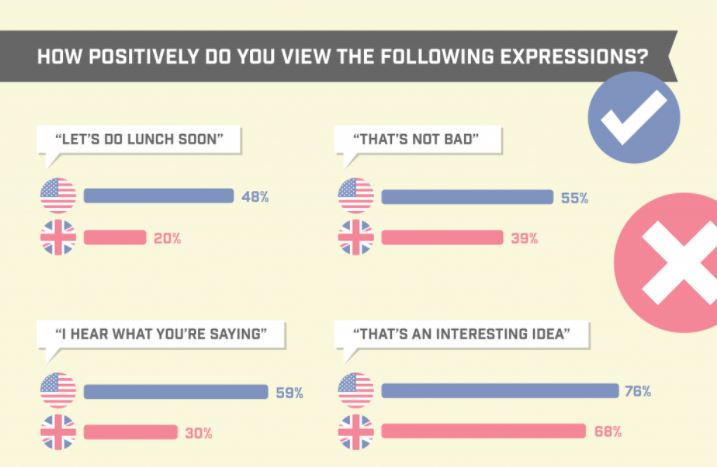 Flirting at work is more accepted by those in the U.K. (24 percent said it was acceptable), while only 16 percent of Americans said the same. Swearing is looked down upon by both, with 80 percent of each group saying so, and sarcasm is also not considered professional by the majority of both groups (67 percent in the U.S. and 64 percent in the U.K.).

The study found that Britons are also twice as likely to gossip at work than their American counterparts. In addition, Britons expressed a dislike for Americans' loudness and overconfidence while Americans did not like their British colleagues talking about sex.

One big question was in regard to how the groups view themselves and each other. Suffice it to say there were some stark differences on this one.

Americans reported seeing themselves as:

Britons described themselves as:

Check out the full results at TollFreeForwarding.com.

Do you agree with the results of this survey? We want to hear from you in the comments. Don’t be shy! Tell us what you think!