The Story of 'Grizzly Man' Timothy Treadwell, Whose Obsession With Bears Led to a Tragic End

The Story of 'Grizzly Man' Timothy Treadwell, Whose Obsession With Bears Led to a Tragic End

He wanted to befriend the wild, but at what cost?

Timothy Treadwell was an American bear enthusiast, environmentalist, and documentary filmmaker. He had spent 13 summers of his life in Alaska's Katmai National Park studying the coastal brown bears, or the "grizzly bears." Treadwell made several documentaries of his wildlife interactions through videos, photos, and audio. In 2003, 46-year-old Treadwell and his girlfriend, Amie Huguenard, lost their lives while camping and recording themselves amidst the wild.

Timothy Treadwell's life, work, and death became a source of inspiration for German film director Werner Herzog's critically acclaimed documentary film the Grizzly Man, released in 2005. Herzog used Treadwell's journals, including the last audio, to depict the story of a man who considered the bears his friends before being eaten alive by one of them. 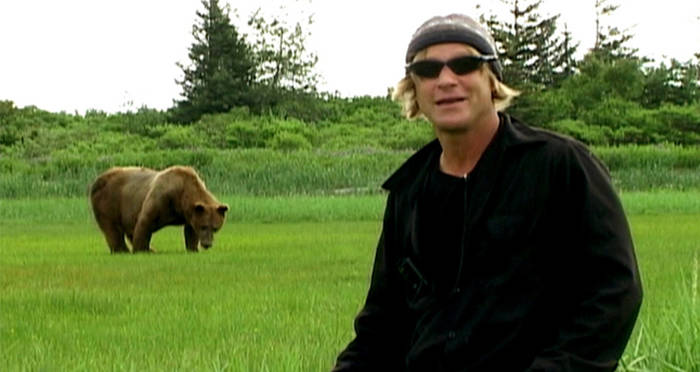 Treadwell with one of the grizzlies he named, Chocolate. Courtesy of Herzog's "Grizzly Man."

Treadwell had always been an animal lover. After his first encounter with a brown bear in Alaska, he knew he had found the love of his life. After suffering a near-fatal heroin overdose in the late 1980s, Treadwell dedicated his life to the Alaskan wild bears. For 13 summers, he kept escaping to the wild and named every bear he encountered.

All these years, Treadwell recorded almost 100 hours of videos and had made a vast collection of still photographs of his interaction with the animals.

Each year by September, the bears start preparing for the "Great Sleep." The animals usually hibernate from November until April and feed as much as they can before resting for the months. Most bear watchers leave Katmai during September as the appetites of the bears' rise. On September 26, 2003, Treadwell and Amie were set to return from Kaflia Bay when Treadwell decided to stay back as he didn't meet his favorite bear yet for the season. It was a female, and Treadwell had named her Downey.

The couple ventured back to Katmai National Park and camped deep inside the Grizzly Maze in Kaflia Bay to remain undetected by the Park Service. It was Treadwell's favorite spot for bear watching, as he mentioned in his 1997 book Among Grizzlies.

Treadwell set up their camp along with one of the significant bear trails in the Maze. According to his recorded videos, he was aware of the dangerous location. Still, Treadwell was convinced that the animals wouldn't pose any harm as they considered him a friend.

Considering the bears friendly, Treadwell stopped using bear sprays and electric fences around his tent. His dangerous tactics for bear encounters had always drawn warnings from the park rangers. Treadwell believed he had developed a sense of mutual trust and respect with the animals. However, experts thought he "was breaking every park rule that there was, in terms of distance to the bears, harassing wildlife, and interfering with natural processes."

According to biologist Larry Van Daele, "his decision not to have any defensive methods or bear deterrents in the camp [was] directly responsible for [the] catastrophic event." 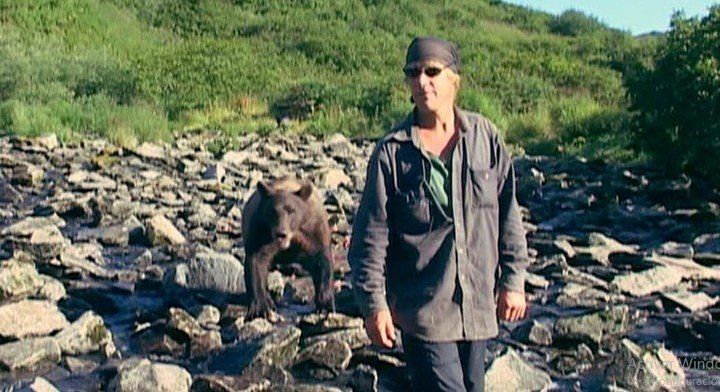 In the summer of 2003, Treadwell had experienced more aggressive bear behaviors. The bears were starving due to drought and preparing themselves gradually for hibernation. As fall approached, salmon populations soared, making the bears very active. After spending 13 years as a bear enthusiast, Treadwell was well aware of the season and bear activities, yet he still decided to stay.

"But, let me just tell you, just between Amie, myself, and you, every fish ran, every bear was here. We made the best friggin' choice of our lives ... Once the [rain] settled down, boy, it was amazing out here," Treadwell told his friend Willy Fulton on October 4, two days before his mauled body was found.

On October 5, Treadwell and Amie spoke to Jewel Palovak, co-author of Timothy's book Among Grizzlies, over a satellite phone. Jewel was also one of the few aware of the couple's decision to stay back in the park in September. "You're gonna think I'm crazy," Treadwell had told Jewel. "But there's a fish run and we're going to go back ... and we want to make sure Downey's okay. What do you think?" Treadwell had finally met Downey, and they were ready to come back home, as they informed Jewel on October 5.

The couple was set to return on Monday, October 6, and informed their friend Fulton to pick them up on his floatplane. 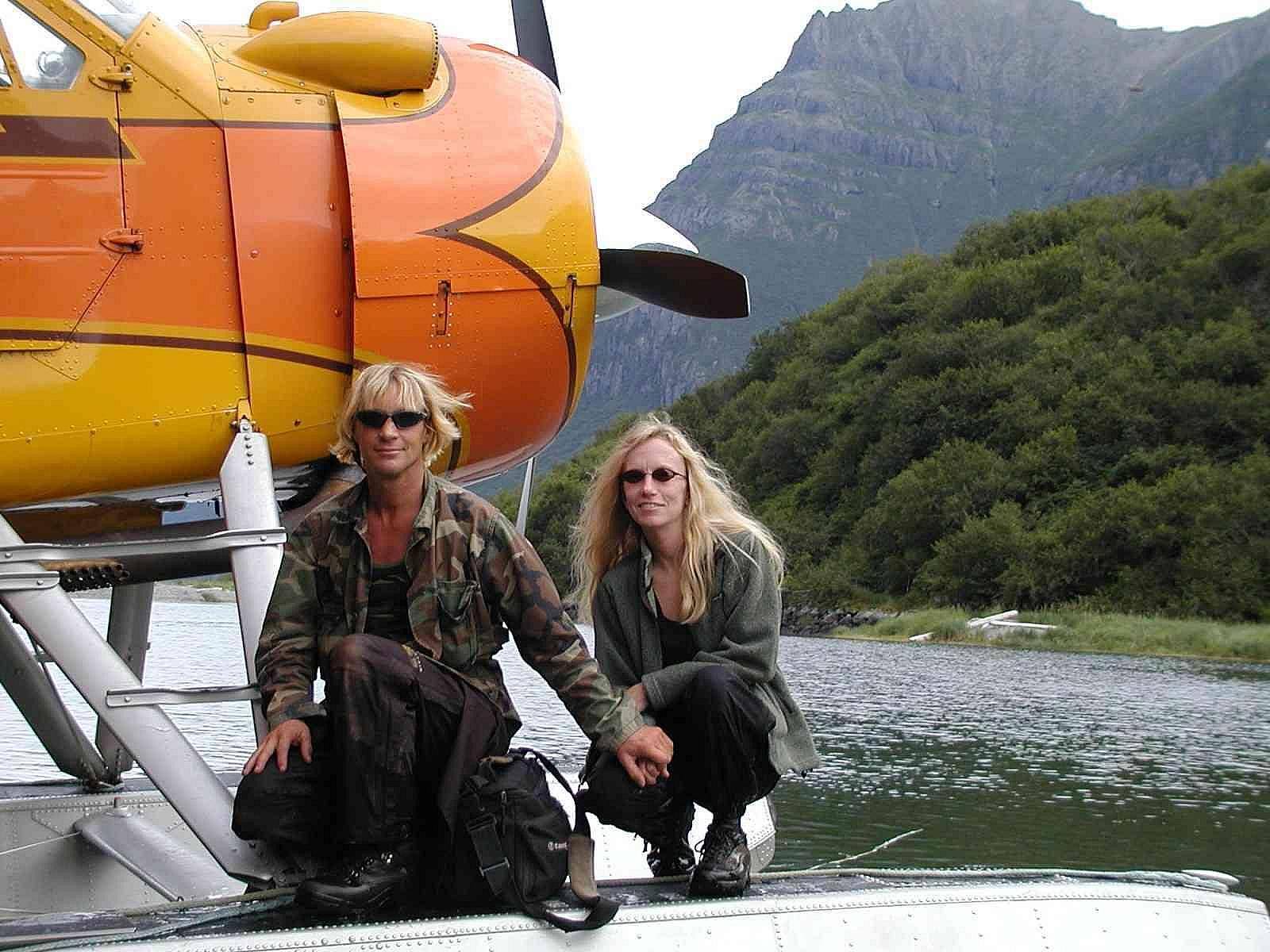 Portrait of Treadwell and Amie, Courtesy of Herzog's "Grizzly Man"

Encounter with the "25th Grizzly"

The horrific attack on Treadwell made experts believe that he might have encountered the "25th Grizzly." Bears of such nature "tolerates no man or bear, one that will [maul] without bias." Treadwell was aware of such bears and had also mentioned them in his book Among Grizzlies.

In September, the couple recorded interaction with two large male bears whom Treadwell named Demon and Machine. His behavior towards the animals seemed convincing that the grizzlies were 25ths. He was still persuasive in befriending them. "The Red Machine is from the old days, the old days of when bears came here and the sight, the smell of a person meant poacher ... How can I communicate to him that I am friend and all the rest are foe?" wrote Treadwell.

On the fateful evening of October 5, it's believed that the couple was mauled by the 1,000-pound grizzly, Machine. On Sunday evening, Treadwell heard a bear growling outside their tent. He went out and kept his sound recorder on. In the disturbing audio, later analyzed by Alaska State Troopers, Treadwell is heard shouting for 3 minutes, saying that the bear was attacking him. Amie asks him to play dead and to fight back the bear. Treadwell asks her to hit the bear. “Amie get away, get away, go away,” Treadwell's scream is heard over the stormy sounds in tape, urging Amy to save herself. However, his voice gradually reduces to moans while Amie then lets out spine-chilling screams. The 6-minute audio clip ends there.

Treadwell's friend, Kodiak air taxi pilot Fulton, arrived to receive the couple the next day, only to witness a horrific sight. As he flew over the camp sight, Fulton saw a collapsed tent and a large bear sitting over a pile of what looked like a human body. Fulton landed on the lake and called Alaska State Troopers in Kodiak and National Park Rangers in King Salmon. On arrival, the rangers searched the area and discovered mauled body parts of Treadwell a few feet away from the camp. Amie's remains were partially buried under a heap of twigs and dirt next to the torn tents.

The park rangers were forced to kill a charging old male bear and another young one as they cleared the site of the couple's remains. Investigators recovered human body parts and clothes when a necropsy was performed later on the dead adult bear's body. Reports also suggested that the bear was starving due to old age and broken teeth. This might have led to the bear roaming around Treadwell's tent in search of food.

In the 85-year history of Katmai National Park, this was the first known incident of a person being attacked and killed by a bear.

Grizzly Man was co-produced by the Discovery Channel and Lions Gate Entertainment. The theatrical release also featured a 2001 interview of Treadwell with David Letterman, which was later retained in the DVD release of the documentary.

What do you think of the Grizzly Man? Have you watched the documentary? Share your opinions in the comments.

NCIS recap: Who is taking over Gibbs' team at NCIS?

What you need to know about boosters