The popular American card game “UNO” is celebrating a milestone anniversary. Invented in 1971, the colorful, think-on-your-feet game was invented in an Ohio barbershop and celebrates 50 years of bringing families together. The simplicity of the game makes it easy for all ages to play, making it a favorite for game night. In honor of the anniversary, Mattel is creating some special-edition sets and bringing back the original '70s version.

The company will also be holding a UNO Championship Tournament with a grand prize of $50,000.

Today, UNO is played in more than 80 countries and has more than 100 different themed versions, including SpongeBob Squarepants, Star Trek, and The Big Bang Theory. It can also be played on various digital platforms and has been made into a Braille version for the vision impaired.

"For 50 years, UNO has brought people together by transcending language, culture and age through gameplay. As the number one game in the world, we’ve maintained its origins of a beloved family pastime, while evolving into a cultural phenomenon," said Ray Adler, Global Head of Mattel Games. "Combining the brand’s roots of inclusivity and simplicity, the passionate global fan base, and unprecedented momentum, UNO’s 50th anniversary is a yearlong celebration of the brand’s past, present and future.” 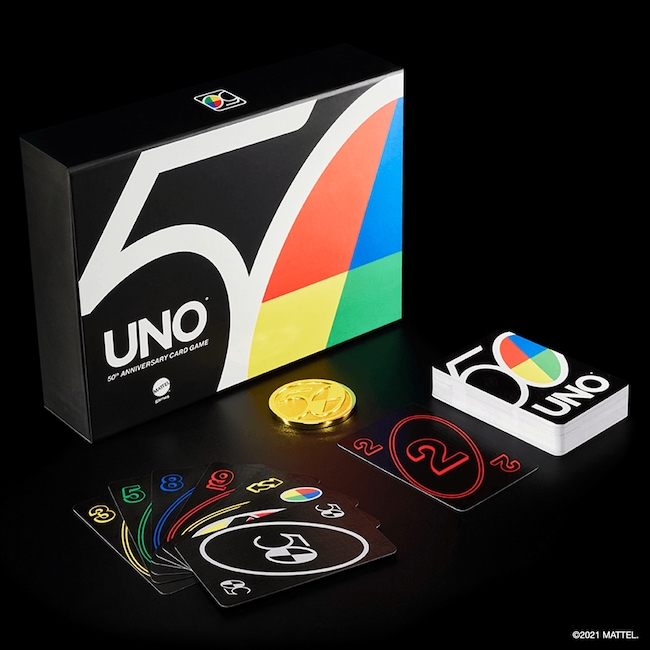 UNO fans can buy a special-edition 50th-anniversary premium set at Walmart that has a gold coin that incorporates a new 50/50 rule. A 50th-anniversary deck with gold wild cards is also available. Mattel is also launching three other special decks, UNO Attack, UNO Remix, and UNO Iconic series. UNO Attack is a premium edition that incorporates lights, sound, and flying cards. UNO Remix allows players to add new cards each round, and the Iconic Series will be comprised of five decks that represent the last five decades, starting with the 1970s.