Could this get any stranger? Target. Coconuts. Monkey. Labor. Target has pulled Chaokoh coconut milk off its shelves due to monkey labor. Yes, monkey labor.

According to CNN Business, "PETA said the retailer dropped the product because an investigation conducted by the nonprofit organization found that the Thailand-based Theppadungporn Coconut Co. has been "exploiting monkeys and lying about it." 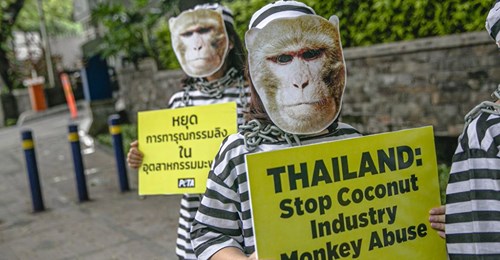 People for the Ethical Treatment of Animals (PETA)'s investigation reveals that monkeys are tethered and caged, as well as forced to pick coconuts and perform for tourists throughout Thailand's coconut farming industry, which has retailers asking themselves, "Were monkeys forced to pick your coconuts?" For some, that question was just enough for Costco to voluntarily pull the Chaokoh coconut milk product from its shelves in October, and now, Target follows suit.

Thailand is home to some of the most beautiful landscapes and delicious cuisine worldwide, but the underbelly of its beauty holds not only monkey farms and monkey labor, but some of the worst forms of child labor. According to The NationThailand, a survey from 2018 reported, "it can be concluded that about 225,000 children [ages 5 to 17) work anything from 15-48 hours weekly."

So while it may be a statement to Thailand's monkey farm industry that American retailers like Target have an issue with forced monkey labor, it also brings into focus an even greater issue of child labor—the real monkey on the back for all retailers (and the world), and unfortunately, it can't be taken off the shelf as easily as a can of coconut milk.

Thoughts on monkey labor and child labor? Sound off in the comments.