3 New Winter Storms Could be Heading to the DMV Region

3 New Winter Storms Could be Heading to the DMV Region

Chances for snow on Saturday, Sunday, and Tuesday evening ...

The DMV is still cleaning up after back-to-back ice storms closed schools, snarled traffic, and downed trees, causing power outages. Temperatures will be in the high 50s for Valentine’s Day through late Friday night, with snow looming on Saturday. But it won’t be all hearts and flowers for everyone in the next couple of days. There is a wind advisory for areas of northern and central Virginia, as well as central and western Maryland. High winds could cause damage to previously iced up trees and power lines.

A low-pressure system moving in threatens to produce a wintry mix of snow and rain. The storm (if it happens) could result in accumulations, especially north of Washington, D.C., and western Maryland. Temperatures are expected to be in the upper 30s, with a low in the 20s.

An almost identical front could move in on Sunday, this time producing snow or a wintry mix in the afternoon. Temperatures will be just slightly cooler, increasing the chance of higher snow accumulations. 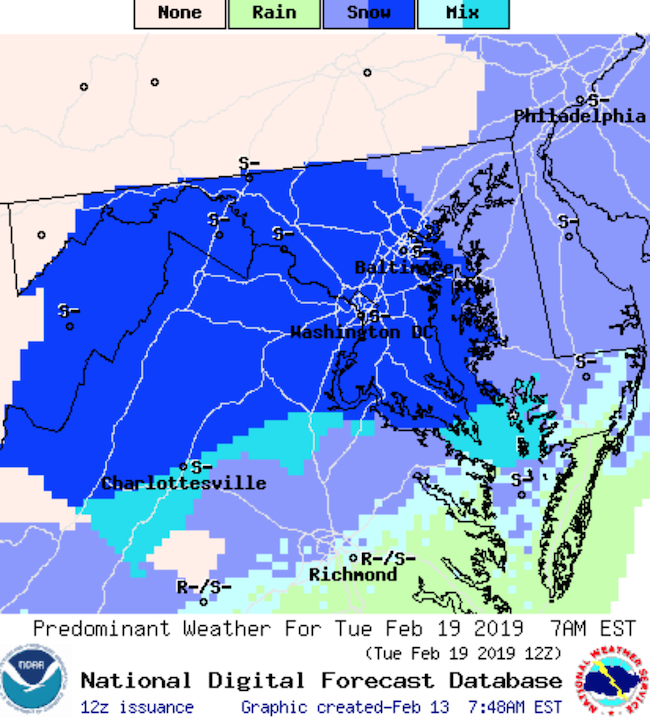 The weather looks dry and mild for President’s Day, but things could get messy on Tuesday. The predictions for Tuesday vary. The European model shows a mix of rain and snow on Tuesday night, tapering off to all rain on Wednesday. The American model is a little different, showing a mix of rain and snow Tuesday through Wednesday. Temperatures are slated to run in the upper 30s on Tuesday with a low around 24 degrees. Wednesday daytime temperature could be in the low 40s, turning that snow to rain.

It’s still too early to know which of these storms, if any, will produce any measurable snow. The storm with the highest chance of disrupting commutes and school schedules is storm No. 3, on Tuesday. Many school districts in the region have already used up their allotments for inclement weather days, increasing the chances for an extended school year.

Want a job at Amazon HQ2? We've got all the details here!