3 Trumpeter Swans Have Hatched at the Maryland Zoo

3 Trumpeter Swans Have Hatched at the Maryland Zoo

The swans will spend winter in Iowa as part of their Trumpeter Swan Restoration Program.

Here's some news to give you the warm and fuzzies: New trumpeter swans have hatched at the Maryland Zoo! The zoo announced the arrival of the three hatchlings last month after a 30-day incubation period. Female swans tend to lay 4-6 eggs in a single "clutch," so these hatchlings are right on schedule!

"This is our fifth clutch laid by the trumpeter swan pair here at the Zoo," said avian collection and conservation manager Jen Kottyan. "These cygnets have a very important role to play in the conservation of their species."

Kottyan says the next step is to monitor the hatchlings in the next few months using a hands-off approach to prepare them for eventually entering the wild. The birds will prepare to spend winter in Iowa as part of the state's Trumpeter Swan Restoration Program, where four of the zoo's swans have been previously sent to. 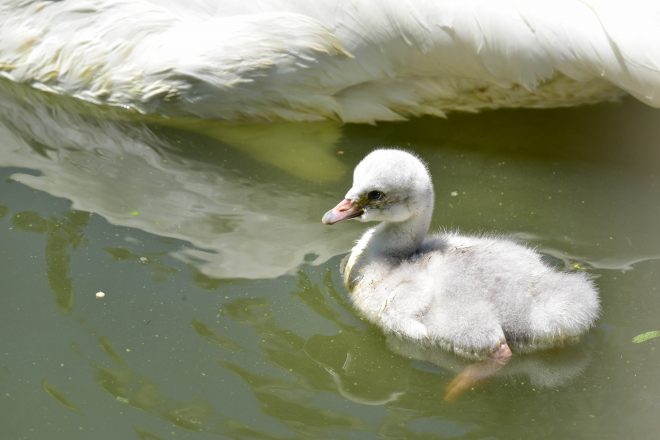 Courtesy of The Maryland Zoo in Baltimore

With their black beaks and big webbed feet, trumpeter swans are the largest swan species in the world, weighing between 20 and 30 pounds. They measure four feet in length and possess a wingspan of six to eight feet. Their average lifespan is 15-25 years.

While trumpeter swans are considered "Least Concern" by the International Union for Conservation of Nature, the species has been close to becoming extinct due to hunting. In the early 20th century, swans were hunted for their beaks and skin before the introduction of the Migratory Bird Treaty Act of 1918. Despite this protective legislation, the swan population dipped as low as 70, total, in 1932.

It wasn't until the Iowa Department of Natural Resources (IDNR) began the conservation project that swan populations started to rise—at least 60,000 now live in the wild today. Kottyan added, "While our adults are not suitable for release, it is great to be able to watch them rear their cygnets and contribute to the swan population in the wild.”

The zoo is currently closed to the public, but their live animal webcams are available to stream every day. Along with the trumpeter swans, viewers can watch penguins, lions, goats, and other cool animals, which you can find here.

What do you think of the baby trumpeter swans? Have you visited them in person before? Let us know in the comments!