30-Ton Whale Found on Maryland Shore, and Removing It Has Proven Problematic

30-Ton Whale Found on Maryland Shore, and Removing It Has Proven Problematic

A similar situation more than 50 years ago in Oregon led officials to use dynamite to remove a whale carcass.

Officials are trying to determine why and how a female humpback was found stranded on the shores of the Assateague Island National Seashore in Maryland. The whale weighs about 30-tons and was enrolled in an environmental study from the Center of Coastal Studies in Massachusetts. Assateague Island officials tried to remove the animal’s carcass shortly after it washed ashore on February 18, 2021, but have been unsuccessful. Members of the Maryland Department of Natural Resources have taken samples to try and determine the cause of death. Officials are warning the public to stay away from the carcass.

The whale, known as “Pivot” was part of a study going back to 2008 and was most frequently located off the coast of Maine. The whale carcass was found in Maryland and officials believe the whale died from natural causes but will wait for results from the blood and tissue samples to confirm the cause. The approximate age of the whale is unknown. After working for several hours on February 23 to remove the animal, officials found they were no match for the weight and ocean surf 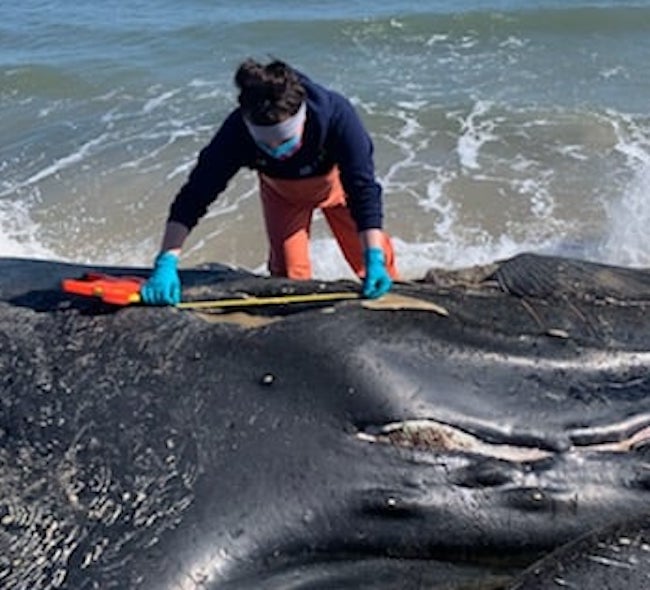 Faced with a similar situation in 1970, officials in Oregon turned to dynamite to get rid of a 45-foot sperm whale. They figured the explosion would turn the whale into millions of tiny pieces that would be devoured by marine scavengers. A local news crew on hand to film the explosion ended running to avoid the giant chunks of flesh flying in all directions. You can see the explosion and the aftermath in a special video below:

Until the animal can be safely removed, the Maryland Department of Natural Resources is asking the public to stay away from the dead carcass. A federal law passed in 1972 called the Marine Mammal Protection Act, makes it illegal for anyone to disturb or take marine animal carcasses. The law was created to protect marine animals from being hunted, killed, and captured. It also protects land animals like polar bears, otters, seals, and manatees.

That was quite an explosion! Let us know your thoughts on the video in the comments.