From Shazam's Zachary Levi to the cast of Back to the Future, here are our top five highlights from the celebrity panels at this year's Denver Pop Culture Con!

Well, it's official: Denver Pop Culture Con (DPCC) has come to a close. Not sure about you, but we're all still trying to recover from the massive three-day pop culture extravaganza ...

DPCC has quickly become one of the largest pop culture conventions in the United States, averaging 115,000 attendees over the past few years. The convention has boasted quite a few celebrities over that span, too, including Stan Lee (Marvel Comics), Nathan Fillion (Firefly), Karen Gillan (Guardians of the Galaxy), Millie Bobby Brown (Stranger Things), and many more. This year, they kept it going strong with the likes of Dave Bautista (Guardians of the Galaxy), George Takei (Star Trek), Christopher Lloyd and Tom Wilson (Back to the Future), and Cary Elwes (The Princess Bride), just to name a few.

Of course, the true boast of the con is their association with Pop Culture Classroom. This organization inspires a love of learning, increases literacy, celebrates diversity, and builds community through the tools of popular culture and the power of self-expression. It has become a powerful force for education here in Colorado.

The celebrity panels this year featured some great moments from the top guests. Here are five highlights from those panels over the weekend!

Dave Bautista’s Drax from Guardians of the Galaxy became a superhero voice for autistic individuals.

After the first Guardians of the Galaxy, Bautista began receiving letters from mothers saying that their children on the autistic spectrum were able to relate and connect with the Drax character’s unique personality. While Bautista admitted he hadn’t made an intentional effort in this direction with the character, he feels great about its impact and hopes that he is worthy of the connection he is bringing to these individuals.

Zachary Levi is a strong advocate for mental health and his cure is laughter and love.

Levi kindly opened his session with the crowd by announcing his Q&A tradition of running a moderator-less panel, wishing to interact directly with the fans and their questions, as much as the forum would allow. This friendly and personable demeanor was carried throughout his panel, as he checked in on the sign language crew who was having technical difficulties and let his panel run a little long on time so he could answer the question of a seven-year-old fan. He conveyed and impressed love and laughter throughout his time on stage, humbly answering questions in regards to the charities he supports (namely, the Operation Smile medical charity) and encouraging the crowd to find a way to help someone else. 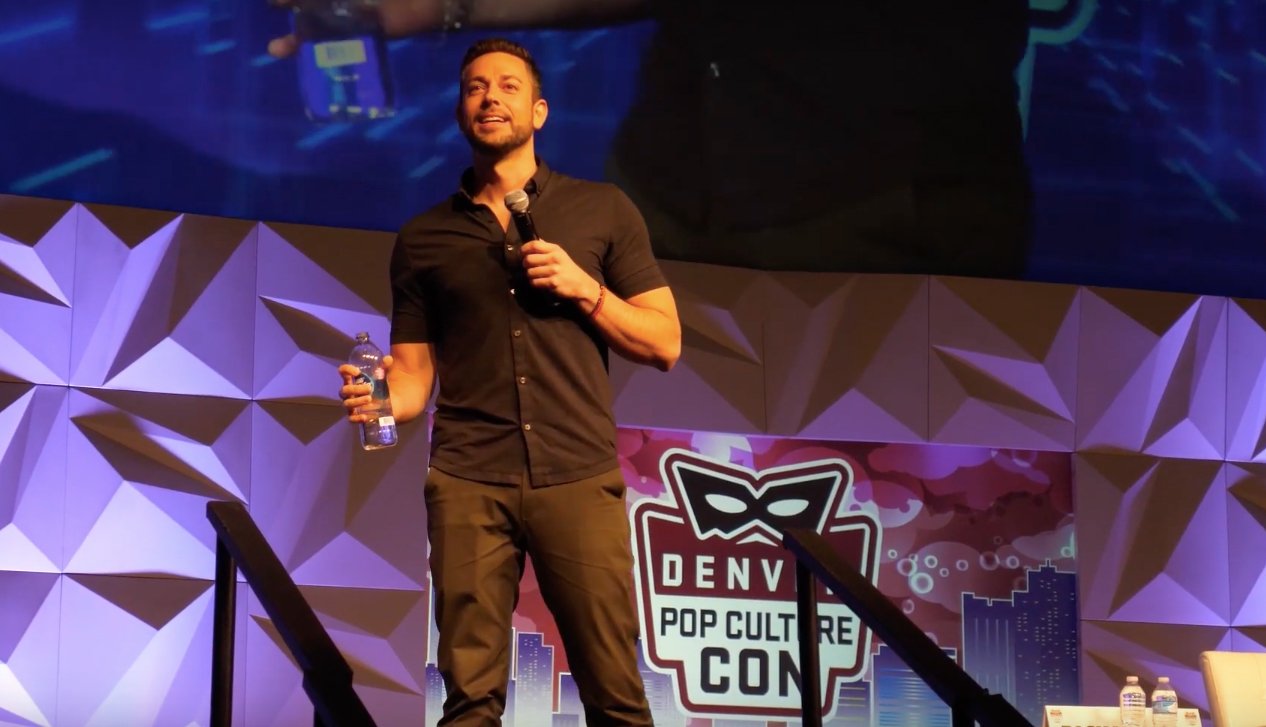 He was also praised by a fan for his advocacy for mental health. Levi thanked the fan and elaborated on the thought, comparing mental health to dental health. He likened issues in the brain to a cavity; ignoring the cavity will make it worse and exacerbate the problem down the road. The same can be said for the brain, so don’t be hesitant to have your brain checked out, too! He then called upon the audience, asking who has struggled with depression and anxiety. When nearly everyone raised their hands, he simply dropped a little humorous self-deprecation and stated that none of us are alone. It is clear Levi is using his platform for all the right reasons.

Tom Wilson knows how to play the ukulele ... and has written a song perfect for Q&A panels.

Tom Wilson, who most famously plays Biff from the Back to the Future franchise, came on stage in the most organic and charismatic of ways, playing on a ukulele to the crowd. Before beginning the Q&A session, Wilson played a prepared number that lovingly spoke to the fans that ask the same questions all the time. In the most lighthearted fashion, Wilson’s ditty quickly delivered on all of these cliche questions like, “How was it working with Christopher Lloyd/Michael J Fox/Crispin Glover?” and “Can I record you saying ‘butthead’ on my voicemail?” It was arguably the highlight of the weekend.

George Takei is releasing a graphic novel (They Called Us Enemy) on July 16 of this year and a TV mini-series (The Terror: Infamy) on August 12 detailing his account of the Japanese internment camp he endured as a child following the events of Pearl Harbor.

Takei has been an activist and advocate for Civil Rights for a number of communities and groups in his lifetime, using his platform and approachable personality to encourage positive change. One such movement he has spearheaded has been providing knowledge on the internment camps Japanese-Americans suffered through during World War II and the ensuing aftermath. These two mediums he has used to communicate his experience will be seen later this year.

Cary Elwes has a never-ending list of Andre the Giant anecdotes.

Elwes is known most famously for his role as Westley in The Princess Bride. His castmate, Andre the Giant, was similarly recognized for his role in the movie as Fezzik. A true giant, Andre was over seven feet tall and weighing in at over 500 pounds. But, as Elwes repeatedly drove home to the crowd, Andre was a gentle and loving soul. Elwes spent a good portion of his panel delving into his fond memories from the set of The Princess Bride and in particular his friendship with Andre. The giant’s girth precluded him from reaching certain locales for filming, so Andre was given a small ATV to travel on from set to set. After much enticing, Andre convinced Elwes to take the ATV out for a spin. After only moments upon the ATV, Elwes broke his toe against a rock, leading to minor issues in filming that Elwes feared would cost him his role. Thankfully, the director didn’t take the gaffe as serious as Elwes, and filming found a way to continue. This is just one story Elwes divulged to the crowd in regards to a person he clearly looked back on fondly.

DPCC has another successful year of panels under its belt, bringing in another cast of genuine personalities that bring their own unique and entertaining experiences to the fans. Here’s to another great year and to many more to come!

Did you attend Denver Pop Culture Con this year? Any panel highlights and/or memorable celebrity encounters to share? Sound off in the comments below, nerds.

This article was written by Dalton Vanhooser.