A Giant Black Bear Was Found in Virginia Woman's Backyard Pool, and It's Pretty Wild

A Giant Black Bear Was Found in Virginia Woman's Backyard Pool, and It's Pretty Wild

The bear cooled off in the pool for an hour before running away!

What would you do if a giant black bear wandered into your backyard? Virginia resident Regina Keller experienced this exact moment last week, and we can "bear-ly" believe our eyes! Let's just say it needs to be seen to be believed!

Keller resides in Fort Valley by the George Washington National Forest, a densely-forested area full of wildlife. Since her location is quite rural, naturally she encounters a lot of woodland critters like deer, foxes, and bears, which she has taken photos of for over 12 years now.

So when a bear popped up in her backyard while she was tending her flowers, she did what she always does: take a picture. But what happened next was pretty wild—He decided to go for a swim.

She told CNN, “He wandered around the backyard… and went over by the pool and dipped his big paw in the water… and then climbed right in and laid down. He seemed so content and refreshed." 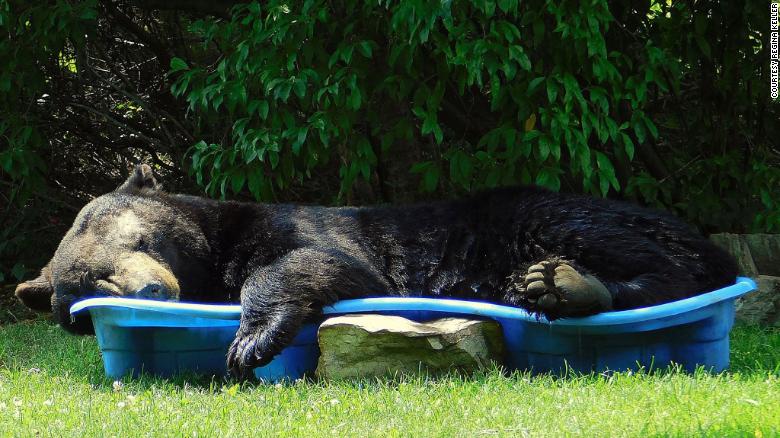 That's right, the bear plopped down in her kiddie pool in the backyard and stayed there, apparently helping himself to a nice cold soak in the July heat. What's even crazier is that Keller recognized the bear, having seen him two years ago. Considering he was the largest bear she spotted this year, it's unsurprising he would make quite the impression!

According to Keller, the bear made himself at home, lounging in the pool for about an hour before the sound of Keller's grandchildren approaching the driveway startled him away. But the whole time he was there, she managed to watch him from the door.

"It was neat to see and neat that I had my camera with me to capture it," she said. And we totally agree! It's a miraculous shot that's summer bliss in a nutshell—a true Kodak moment if we ever saw one!

So tell us—What's the wildest animal encounter you've ever had? Share your stories with us in the comments!