The spruce beetle remains the most damaging forest pest across the state.

Due to COVID-19, the trained observers in 2020 only flew over priority areas that were most likely to have beetle damage and tree mortality. Around 16 million acres were monitored, about half of the acres surveyed in 2019.

In some good news, the intensity of the two main offenders: the spruce beetle and Douglas fir beetle decreased in 2020. Unfortunately, they continue to spread into previously unaffected areas.

One area where increased spruce beetle activity was prominent was the Roaring Fork Valley. While there had been limited infestations in prior years, it appears the spruce beetle is proliferating in several areas, including the northern parts of the Elk Mountains.

Statewide, the spruce beetle continues to primarily affect forests in eastern Gunnison and western Chaffee counties, as well as infesting Hinsdale, San Juan, and LaPlata Counties. According to the USFS, since 2000, the spruce beetle has affected at least 1.88 million forested acres in the state. 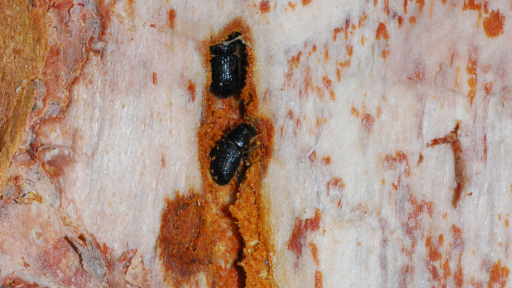 This beetle spread is being exacerbated by recent weather conditions and wildfires in the state. Drought is particularly putting stress on trees, making them more susceptible to beetle damage.

“Unfortunately, our dry conditions are optimal for insect epidemics and tree diseases in many parts of the Rocky Mountains,” said Tammy Angel, Acting Regional Forester for the USDA Forest Service, Rocky Mountain Region in a press release.  “Where possible, managing forests for age and species diversity can increase resiliency while ensuring diverse wildlife habitat, cleaner air and water, timber and grazing resources, and greener, safer landscapes for recreation.”

Infestation from other forest pests was also observed, including the roundhead pine beetle, which is affecting ponderosa pines in southwest Colorado. In addition, the western spruce budworm is the state's most widespread forest defoliator, causing damage that weakens trees to the point that bark beetles can kill them.

For more results from the 2020 aerial survey, including a map of insect and disease activity in Colorado, please visit bit.ly/COForestHealth2020.