Amazon is giving the public a glimpse of the plans for the second phase of its new headquarters in Arlington, Virginia. After an extensive search by the web giant in 2018, Arlington was chosen to be the company's second headquarters outside of Seattle. When it is finished, the new campus will be called National Landing and will employ a total of 25,000 people. The centerpiece of the new phase is a 350-foot helix-shaped building that features nature walkways filled with plants and trees native to Virginia.

Phase 2 will have three office buildings with a total of 2.8 million square feet of office space. The project will also include 2.5 acres of public space with an amphitheater, food truck space, and relaxation spaces. The office buildings are designed to be LEED Platinum compliant, running on 100 percent renewable energy from a solar farm in Virginia. Amazon has made a company-wide commitment to be net-zero-carbon by 2040. 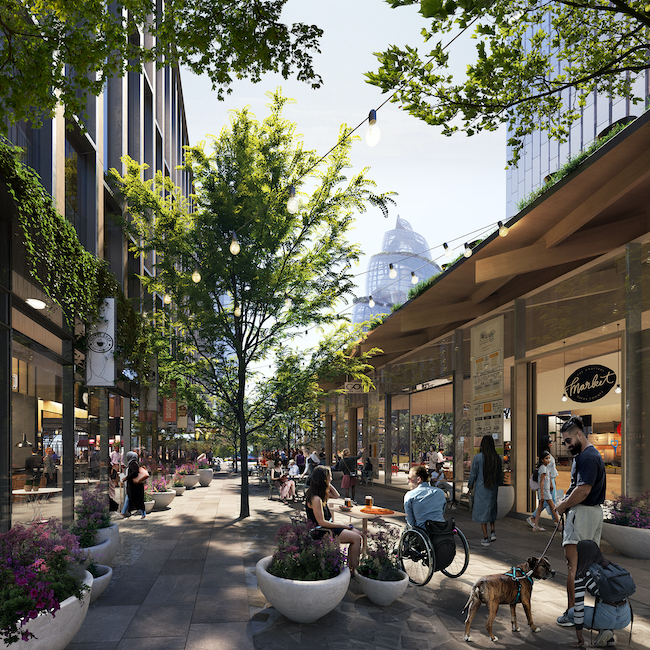 Rendering of retail space at Amazon HQ2, Courtesy of Amazon

The site will be pedestrian and bicycle-friendly with most of the vehicle and truck traffic restricted to underground garages. Buildings will have street-level bicycle entrances to foster green commuting. Restaurants and retail shops will be located throughout the campus along with essential features including childcare facilities, meeting spaces, and a dog park.

The project will be constructed by Baltimore-based Whiting-Turner will be the general contractor for Phase 2. Phase 1, dubbed the Metropolitan Park, is already under construction and includes two 22-story office buildings. Metropolitan Park is scheduled to be completed in 2023. No word on when construction will begin on Phase two. The entire project is will cost upwards of $2.5 billion, create up to 50,000 jobs, and bring $4 billion in infrastructure spending to the area.

Are you a fan of Amazon's future expansion? Let us know in the comments.

Norfolk's Willoughby Harbor Marina Is Getting a New Seafood Restaurant