The trip will be approximately 2 hours and 35 minutes long, getting you there at top speeds!

Beginning September 23, residents of New York City and Washington, D.C., will be able to take a non-stop trip, called Acela Nonstop, to either city in only 2 hours and 35 minutes! Amtrak is the first to offer this service, using their current Acela trains that can travel up to 150 miles per hour.

At this point, there will only be one available time for each direction (a northbound and southbound), but Amtrak plans to hopefully expand to other times based on frequency. Amtrak also plans to launch a brand-new Acela "trainset" in 2021 which will offer the same service, but from New York City to Boston.

Here is the current schedule:

The current service caters to New Yorker travelers more because the trips begin in New York City in the morning and leave Washington D.C. in the afternoons. Hopefully, when they expand the service, they will be able to offer a trip that leaves Washington, D.C., in the morning as well.

Check out the Acela route: 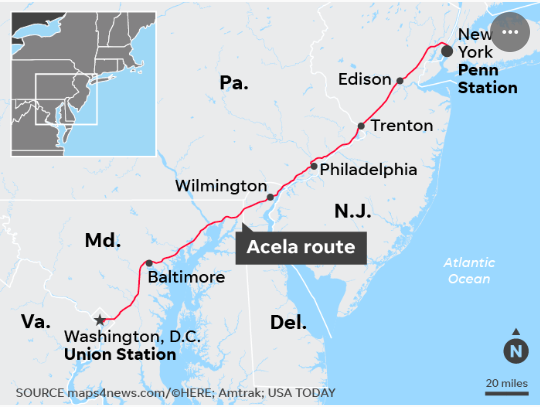 “The new Acela Nonstop service will have you halfway to your New York City or D.C. destination in the time it would take you to board a flight,” said Amtrak President & CEO Richard Anderson in a press release. “This new service will offer an ideal solution for travelers who want to save time and travel between city center D.C. and New York.”

The service will benefit travelers who wish to shave time off their trip and business people who need to travel between the two cities for work. This is a very convenient service for the locals who plan to take a day trip to either city because they can avoid all the annoying traffic! A nonstop trip will cost you $130 to $276, the same price as the current Acela Express trips.

Are you excited for this service? Do you plan to use the Acela Nonstop service when it launches? Tell us in the comments!