The mandate is being put in place after case counts rose more than 300 percent in the last month.

The City of Baltimore will once again require people to wear masks in indoor spaces. In a press conference on August 5, Mayor Brandon Scott said the mandate would be in place on Monday, August 9, 2021, at 9 a.m. Scott said the mandate is needed to combat the rising levels of coronavirus cases in the city due to the highly contagious Delta variant. Within hours of that press conference, Governor Larry Hogan has also announced new guidelines and restrictions for employees in state buildings.

Over the past month, the number of positive cases in Baltimore City has increased by 374%, pushing the area into a substantial risk category according to guidelines set by the CDC. Currently, 63% of residents in the city have been vaccinated with at least one dose. Baltimore City was one of the last jurisdictions to remove capacity restrictions after Governor Hogan canceled the state of emergency declaration. 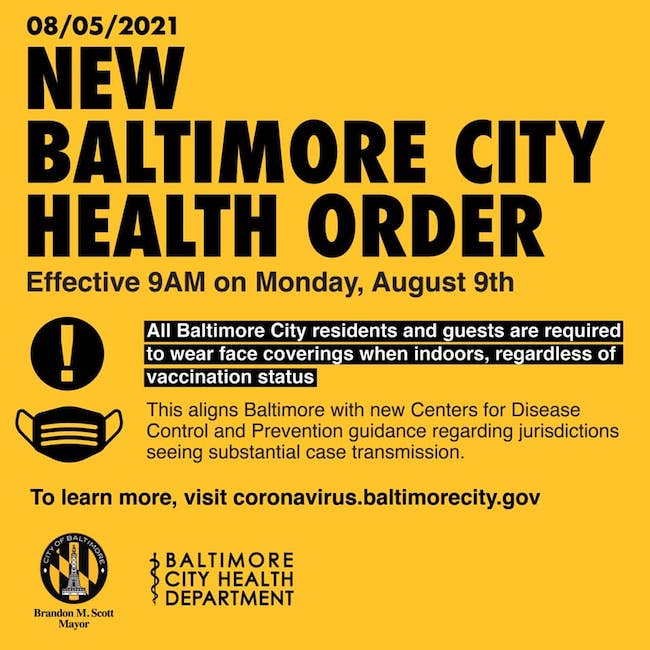 The new mandate goes into effect on August 9 and applies to anyone over the age of two, vaccinated or unvaccinated. As the Delta variant continues to increase case counts around the country, state and local governments have begun to make decisions about masks for the upcoming school year. So far, a majority of the counties in Maryland have adopted mask mandates including Anne Arundel, Baltimore, Howard, Prince George’s, Montgomery, and Frederick County.

Governor Larry Hogan has said he would not put a mask mandate in place at the state level but will allow local leaders to make decisions for their cities and counties. The state will be requiring vaccination and strict testing rules for state buildings beginning on September 1. Employees at 48 state facilities will be required to provide proof of vaccination or undergo frequent testing and wear masks at all times. The new rules apply to anyone who works in the Department of Health, Juvenile Services, Public Safety and Corrections, or Veterans Affairs.

What do you think about this new mask mandate? Share your thoughts in the comments.