Strap yourself in for a "Polar Coaster" of a winter with above-average snow.

The Farmers' Almanac is at it again, unleashing its 2019-2020 winter predictions on us all.

To sum it up in one word: yikes.

The report's exact headline reads "Polar Coaster Winter Ahead," if that gives you an idea of what we are in for.

"Are you ready for another winter ride, full of chills and thrills?! According to the 2020 Farmers’ Almanac, this winter will be filled with so many ups and downs on the thermometer, it may remind you of a 'Polar Coaster,'" relates the Almanac website.

It looks like a majority of the country, Colorado included, will be trapped in Old Man Winter's grip this year, with some extreme weather expected. The Almanac predicts the most frigid temperatures in the northern plains to the Great Lakes region. Only the farthest west states will see near-normal temperatures. Colorado doesn't fall in that near-normal category.

"Our extended forecast is calling for yet another freezing, frigid, and frosty winter for two-thirds of the country," shares Editor Peter Geiger.

Here in the Centennial State, the prediction is for cold temperatures and an above-average snowpack, which should play out well for our ski industry. The coldest temperatures are expected from Mid-December to early January and late January to mid-February, which is fairly standard for the state. Though the Almanac is saying that the worst of the bitterly cold conditions will be areas east of the Rockies to the Appalachians, so the eastern plains may be in for it. 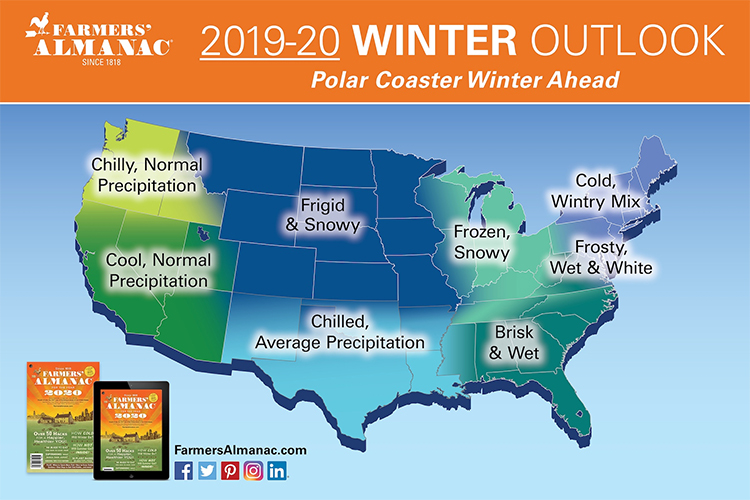 It does seem that the Midwest and eastern part of the country are, overall, going to get hit the hardest. Colorado is considered in "North Central U.S." by the Farmer's Almanac. Our southern border is also the border to the Southwest U.S. region of the almanac, which is actually predicted to see near-normal precipitation. That could set up the areas down near Durango and other southern parts of the state to go into another year with good moisture and less fire danger.

So, how accurate is the Farmers' Almanac? Using a hush-hush astronomical and mathematical formula that "relies on sunspot activity, tidal actions, planetary position, and many other factors," it was fairly spot-on for the 2018-2019 winter, especially for the midwest and eastern states. It predicted Colorado fairly well, just slightly underestimating the snowpack we received in the mountains.

From last year's prediction: "According to the good peeps at Farmers’ Almanac, we’ll get our snow this season. Not as bad as some years, though not as much as we probably need to replenish our snowpack and reservoirs. The big winners in the snow game this year will be the Northeast and Great Lakes regions, with more white stuff coming down than usual."

Nailed it. You can read more about its accuracy on its website.

The publication has been predicting the weather since 1819, so it's probably safe to say that if it tells you to stock up on firewood, rev your space heaters, and get the snowplow ready, you should just do it.

How do you feel about winter? Snow, snow, and more snow OR no, snow, no? Let us know in the comments below!