Labor Day took on a whole new meaning for 9-year-old Eve—instead of taking it easy, she gave birth to an unexpected bundle of joy!

According to zoo officials, the black-haired, pink-eared baby, whose sex has not yet been identified, came as a bit of a surprise to Eve's keepers as she is on oral contraceptives to prevent pregnancy. But, just like humans, there is always a chance the contraceptives don't work, and in this case, that was true making Eve and her habitat mate, Wayan, brand-new parents.

"Eve and Wayan are normally spooning together when we come into work for early-morning checks," said Kelsey Newman, keeper at CMZoo who doesn't always work in Primate World, but was the first to see the baby Siamang. "This morning, I noticed they were sitting a little differently. Then, Wayan moved away from Eve and I saw the little baby's arm. It was a surprise, for sure."

Siamangs, a type of Gibbon that is endangered in the wild, don't show as obvious signs of pregnancy as many other species, but despite the surprise, keepers are monitoring the new family, and everyone seems to be adjusting well to their bundle of joy. 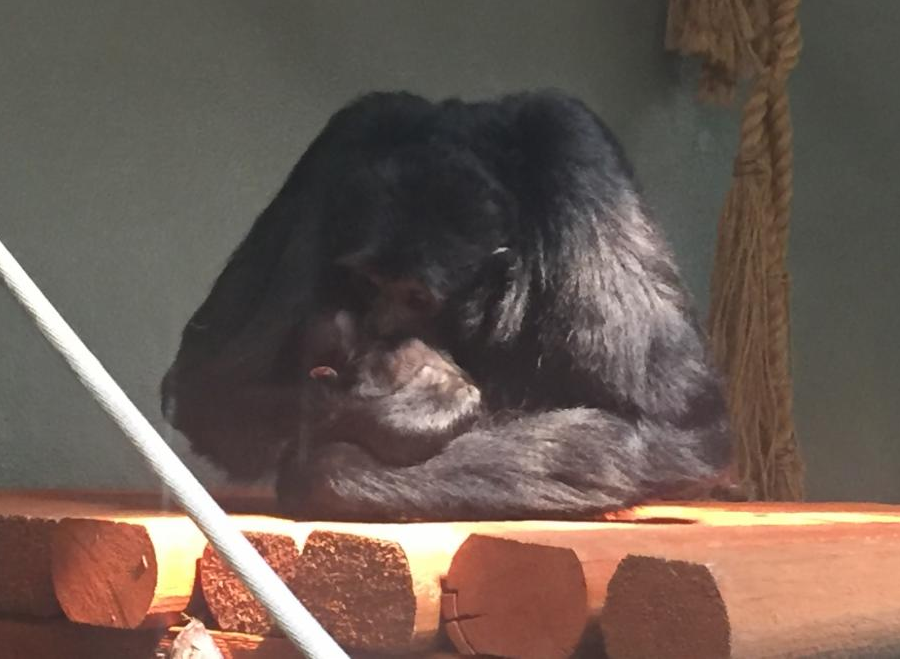 Eve nuzzles her new little one while nursing. Courtesy of Cheyenne Mountain Zoo.

"You can tell just by looking at Eve that she's head over heels in love with that baby already," said Joanna Husby, Primate World animal care manager. "She's cradling her baby with both arms, licking its head and nuzzling it while it nurses. It's really sweet. We're already seeing great instincts in Wayan, He's sticking close by without interfering. He's really curious and is being respectful, showing support without taking over."

According to Husby, Siamangs are known as "romantic apes" because they are the only ape species that mate for life. They have tight family bonds, and fathers play a big role in raising their babies, unlike many species of the animal kingdom. When mom Siamangs get sleepy, you'll see the dads cuddling the babies while the moms rest.

Currently, the family is behind the scenes at the zoo to bolster bonding time, but they will be allowed outdoors in the future as the little one grows. The zoo encourages you to stay tuned to its Facebook page for more updates on the family, the baby's gender, and its eventual name!