Joe Johns, senior Washington correspondent for CNN, began a live shot on the White House lawn early on Tuesday, October 6. During the live broadcast, Johns began to shout and then threw a footstool at an out-of-frame raccoon.

While the subject of the broadcast was White House coverage, it is unclear what statement the raccoon intended to make before being chased off. The raccoon was unavailable for comment.

This is what a consummate professional @joejohnscnn is. Seconds before his @NewDay live shot, he fends off a raccoon attack! Just another day in the nutty news cycle. #behindthescenes #whitehouseraccoon #wildlife pic.twitter.com/p13w3QICiD

“Frickin' raccoons, man. God, again! This is the second time! Jesus ... It always comes around right around when I’m about to go on TV ... get!" Johns can be heard in the video berating the raccoon before letting loose a guttural yawp, which seems to have scared off the animal.

In CNN's coverage of the incident, Johns shows off the sizeable wooden stool he threw at the raccoon, but insists that "No, no raccoons were harmed in the making of this exercise." Johns also reveals a deeper rapport with the White House raccoons than first suspected—another week back, a raccoon had grabbed his leg during a live broadcast.

"I felt something on my leg and the first thing I thought was, it was a cameraman from another network. And I look down and it's a raccoon that had just grabbed my leg," said Johns.

I heard one of the raccoons (pretty sure there are more than one) slipped into a WH guard shack last night .. they're totally unafraid of people at this stage.

Johns' experience with the rascals is corroborated by other journalists. Late September, Paula Reid of CBS said a raccoon on the White House lawn had "attacked multiple news crews." There is no evidence that these White House raccoons are politically motivated. Experts speculate their chief aims are food, and possibly mischief.

Strong Pawnee vibes at White House this morning as a raccoon attacked multiple news crews on North Lawn. 🦝 allegedly grabbed pant leg of a photographer & then a corespondent before being fended off. (WH 🦝🦝 🦝 pictured here in more peaceful times.) pic.twitter.com/o5VbTUHxBR

Federal officials are working to discourage and curtail the White House raccoons. One scheme involved a trap baited with marshmallows, but the cunning 'coons nabbed the mallows without setting off the trap.

👀 Trap on WH north lawn is shut, marshmallows are gone, but there is no 🦝. @CBSNews crew spotted a 🦝 roaming around this morning, but it had “no comment” on treats missing from the trap. @NatlParkService pic.twitter.com/sikFUipvnY

The History of White House Raccoons

Perhaps the raccoons feel a sense of shared ownership of the White House. After all, President Calvin Coolidge owned a pet raccoon in the 1920s named Rebecca, which attended events and wore a collar that read "White House Raccoon." 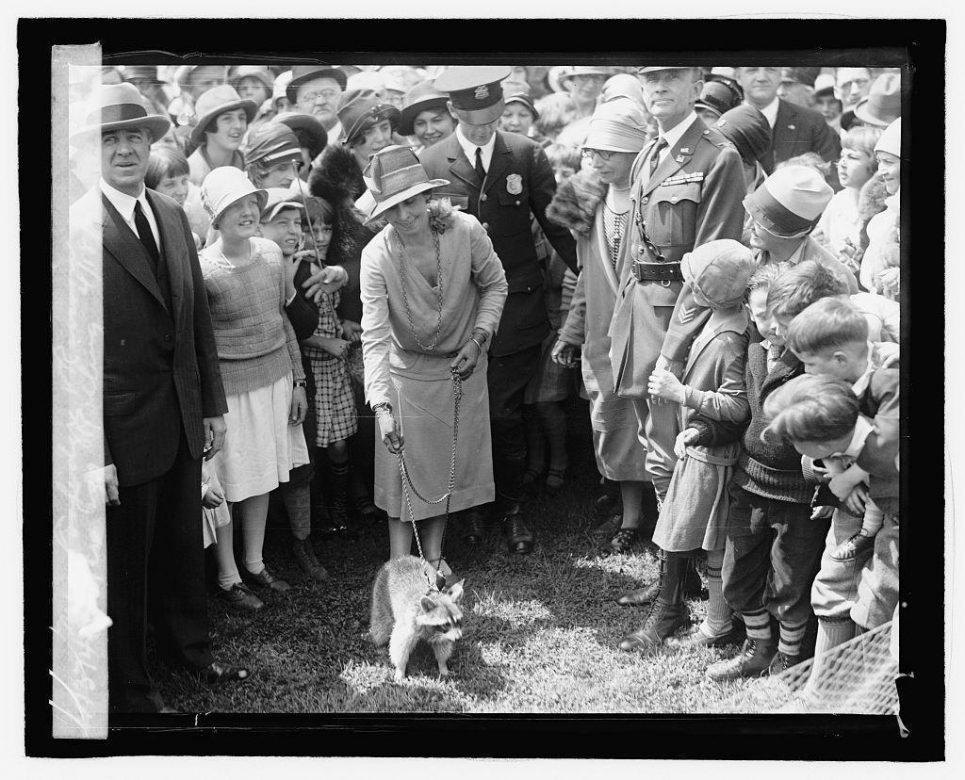 Rebecca had a strong public image and an adoring following, many of whom wanted to matchmake for the loveless Rebecca. One unnamed policeman even captured a prospective boyfriend raccoon in northern Virginia, which the policeman named Horace but President Coolidge renamed Rueben.

But Rueben and Rebecca were not meant to be: Rueben was a rapscalion. On one occasion, Rueben escaped his cage, scaled the White House gate, and leapt into Pennsylvania Avenue where he stopped traffic for 30 minutes.

All that to say, perhaps the 'coons are here to stay.

Would you react to a raccoon attack as cooly as Joe Johns? Leave a comment!