Coast Guard officials are hoping someone will recognize the caller’s voice.

The U.S. Coast Guard is asking for the public’s help to find the source of a rash of hoax calls near Ocean City. The fake radio calls began in late March and are suspected to be from the same person. With the busy summer season beginning, officials say the hoax calls could put boaters and first responders at risk.

"We take every call seriously, which means that hoax calls waste valuable resources that could be used for real distress cases. The Coast Guard has expended resources responding to this one caller, which is unfair to the taxpayers and puts other mariners at risk,” said Cmdr. Mathew Fine, deputy commander of Sector Maryland-National Capital Region.

The calls are originating from a channel used only for distress calls, VHF-FM channel 16. In audio from the calls, the caller repeatedly says “mayday, mayday, mayday” states they are “going down with the ship” and uses profanity. The Coast Guard has posted the audio for the public to hear, hoping someone will recognize the person’s voice. Finding the person responsible and ending these calls would ensure the Coast Guard can respond quickly to maritime emergencies this summer. 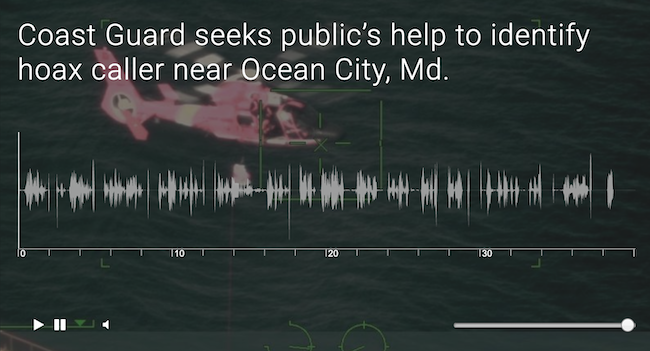 If you think you know the owner of the voice in the audio, please contact the Coast Guard Investigative Service at cgis-baltimore@uscg.mil.

Making false distress calls is a crime and violators could be punished with up to 10 years in prison and fined up to $250,000, plus the costs associated with a fake search.

In 2015, a 23-year-old man in Maine was sentenced to one year in prison, one year of community confinement, and three years supervised release for making a false call from a radio in his truck.

Do you know of anyone that had to be rescued by the Coast Guard? Do you think you have information about the prankster? Tell us in the comments!