Late winter and spring storms into June helped the white stuff stick around this year.

For the first time since 2011, Colorado still had measurable snow blanketing some of our mountain ranges up until July 15. While not the latest we've ever seen snowpack extend into summer, it's still a rare occurrence for our state. Last year's snowpack ended on June 10 and the year before ended on June 22.

According to the Natural Resources Conservation Service, as of July 10, we were hanging in at 0.2 inches of snowpack statewide. The NRCS measures snowpack in terms of the amount of water created if the remaining snow melted. The 0.0-inch measurement on July 15 shows that we have finally reached our limit, otherwise known as the melt-out date. 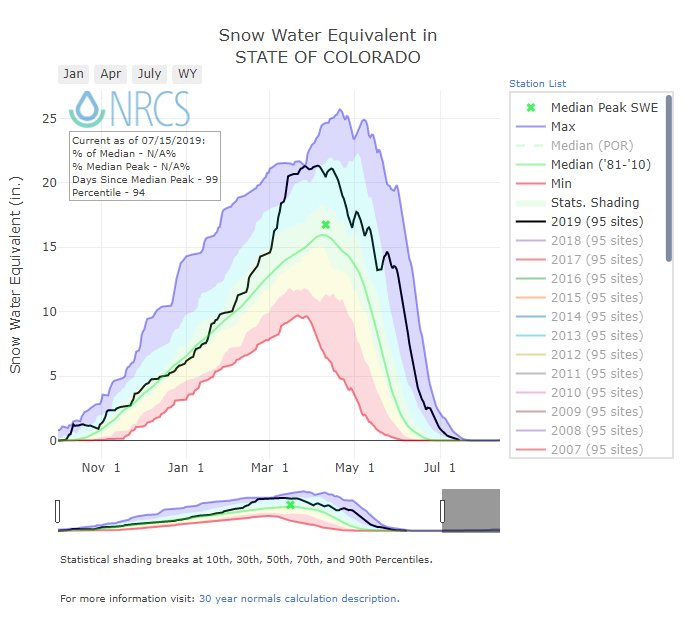 This marks only the sixth year over the past 35 years that snowpack has lingered past July 11. 1993, 1984, and 1997 all made that list, with 1995 and 2011 hanging in there until July 19. Most of this year's late remaining snowpack was in northern Colorado's Arkansas, Colorado, North Platte, White, and Yampa River Basins.

After the winter our mountains had, it's no wonder we had snow hanging out well into summer. In June, snowpack peaked at 768 percent of normal in the San Juan Mountains in the southwest part of the state. The statewide snowpack reached 437 percent of normal on June 1. It was a banner year for ski resorts, as well. Arapahoe Basin was able to capitalize on the lingering white stuff through July 4, and its terrain park remained open until July 14. The latest the ski area has stayed open in history was August 10 in 1995.

All this moisture allowed the state to declare itself drought-free for the first time in what felt like forever. That was quite a change from last year's 80 percent dry status across the state. And, the rivers are certainly running over three times their normal capacity due to the run-off, which has caused flooding concerns, as well as water activity deaths, throughout the state.