Congratulations, Denverites! You Watched More TV in March, April Than Almost Anyone Else in the Country!

Congratulations, Denverites! You Watched More TV in March, April Than Almost Anyone Else in the Country!

We also played a ton of video games ...

When the stay-at-home order was issued, there was one definitive, unanimous choice to the question "what are we going to do with our time?". Of course, Tv, watch movies, new series, hidden gems—any TV content available is up for grabs. Denverites, without knowing it, ended up excelling at this.

According to Nielsen data, people in the Denver metro area watched more TV, played more video games, and ordered more video-on-demand than many larger U.S. markets over the past month and a half.

The national data indicates the top streaming shows came from Netflix, binge-watching episodes of Ozark, The Office, All American, Grey's Anatomy, and, of course, the Netflix original docuseries Tiger King. Overall, streaming activity almost doubled from the same period in 2019.

The increase in TV usage occurred at the same time as the stay-at-home order was put into place. Denverites' TV-viewing plus internet-connected devices used to watch TV content jumped up to 20 percent over comparable periods in the previous weeks before the quarantine order.

Local TV stations also experienced an increase in viewership as they became many viewers' go-to source for information about the coronavirus pandemic. It is in stark contrast to previous years when local news saw a sharp decline in viewership. 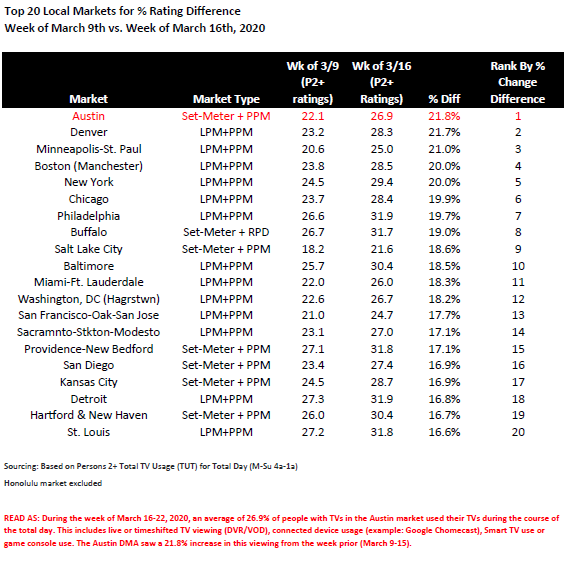 Denver saw its first big jump during the week of March 16, going up to No. 2 in the U.S. for total TV usage, right behind Austin, Texas, in percentage. Denver also came in second to Chicago in the Nielsen report comparing internet-connected device usage gains in the next week of March 23.

However, Denver didn't stay at the top of the list for long. It began to drop off with modest single-digit drops as the weather became warmer in the state of Colorado.

The data includes the total use of TV, like TV-watching, timeshifting, video-on-demand, DVDs and Blu-rays, vide-game consoles, plus plugins like Chromecasts.

However, Denver is not an anomaly. Nationally, the data on TV usage as increased over the past months as well. In total, the biggest weekly viewing increase across the country occurred the week of April 7, according to the Nielsen data. Nationally, Netflix remains the number one choice for viewers to watch their content. Netflix subscribers have collectively streamed about 203 million hours per day during quarantine, according to a study from Kill The Cable Bill.

What do you think? Are you surprised by this? Share your thoughts with us in the comments below.