CPW Asks Citizens to Leave Wildlife Young Where They Are

CPW Asks Citizens to Leave Wildlife Young Where They Are

Helping young wildlife (and really all wildlife) means "hands off."

It's spring, and with that comes baby season! Many species of wildlife are birthing or hatching young, and we are likely to see an increase of adorable babies out and about. Each year, Colorado Parks and Wildlife (CPW) receives several calls from concerned citizens who think they have found an abandoned young animal or bird. While the agency says that these people are often well-meaning, handling these young animals can do much more harm than good, in most cases.

"Many are tempted to 'help' a young animal by picking it up or trying to feed it; however, it is critical that people understand there is no substitute for their natural parents," says the CPW.

What spurs much of our well-meaning, but misguided, action is when we see a young animal that appears to be all alone. Of course, we are concerned, but chances are that mom is not too far away. The CPW says that it is quite normal for adult animals to leave young for a stretch of time in places they deem safe while they forage for food. This happens for both mammals and birds, and often, young birds are seen out of the nest because they are actually learning to fly, not abandoned. Fledgling birds are among the most common animal people think are injured or ill. In reality, they are in an important stage of development. 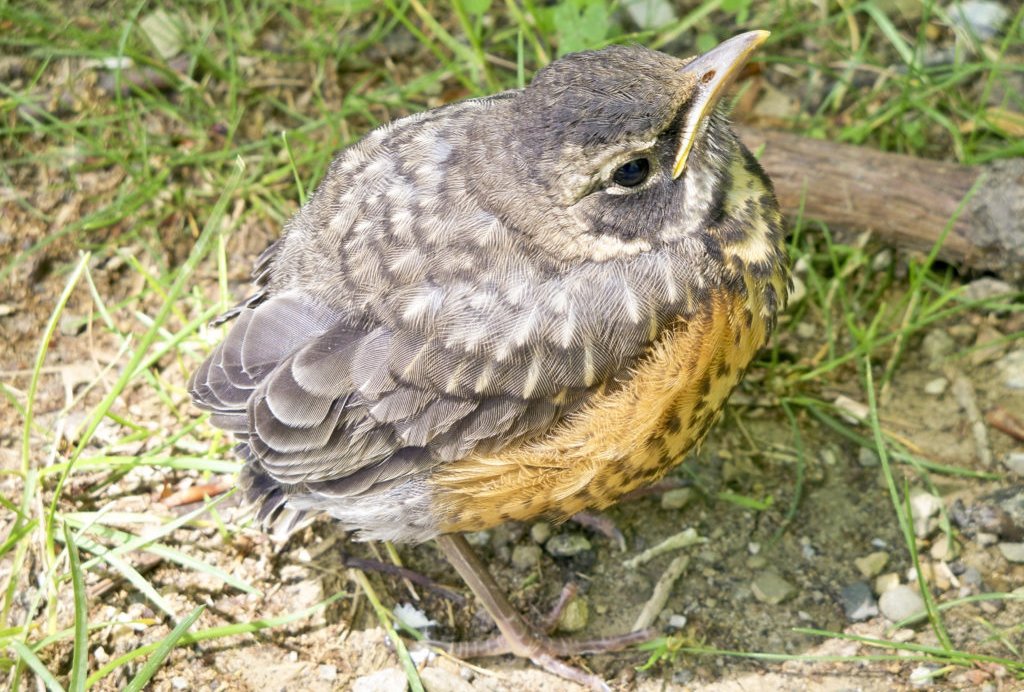 Fledgling birds, like this robin, often spend several days on the ground before it learns how to fly. Courtesy of National Wildlife Federation.

According to CPW officials, while our instinct is to help the little ones, or take them to a wildlife rehabilitation center, that is often the worst thing we can do.

"Baby mammals are scentless in order to prevent predators from finding them," said Janet George, senior terrestrial biologist for CPW. "When humans touch these animals, they are imparting them with a scent their adults will not recognize. This can result in true abandonment of healthy offspring."

If you are concerned that a young animal or bird may have been abandoned, there are several steps to follow before you take any action:

"If 24 hours go by and the parent does not return, it is possible the newborn was abandoned or the parent is dead (hit by a car, for example)," said Jenny Campbell, customer service expert with CPW. "Call our office, and we will work with a certified wildlife rehabilitation center to get aid for the wildlife, if possible. Don't move the animal yourself! By allowing our wildlife to retain their natural, healthy wild instincts, we show our respect for their wild lives."

Concerned citizens are welcome to call the CPW Denver Headquarters at 303-297-1192, ​or any CPW office, if you suspect an animal is injured or abandoned, or to report incidents of feeding or other illegal wildlife activity.