Dubbed the "zombie deer" disease, chronic wasting disease could pose a human threat, according to the University of Minnesota.

Experts are warning that chronic wasting disease (CWD) in wild deer, elk, reindeer, sika deer, and moose has the potential to affect humans.

"It is probable that human cases of chronic wasting disease associated with consumption with contaminated meat will be documented in the years ahead," Michael Osterholm, director of the Center for Infectious Disease Research and Policy at the University of Minnesota, told Minnesota lawmakers recently. "It’s possible the number of human cases will be substantial and will not be isolated events."

CWD is often called the "zombie deer disease" because it literally leaves behind sponge-like holes in a previously healthy brain (it "eats" brains, though the process is a lot more complicated and involves something closer to "bursting" than "eating"). Infected animals tend to stumble, shake uncontrollably, drool excessively, become more aggressive, and eventually lose all motor function as the disease progresses.

It is known as a prion disease, or transmissible spongiform encephalopathy, which is in the same family as BSE, more commonly known as mad cow disease. These diseases cannot be treated with antibiotics or prevented with vaccination and are always fatal. BSE is one main reason there is concern over CWD, as over 150 people are thought to have died in the United Kingdom in the 1990s because of eating beef infected with the disease (contamination of meat by spinal fluid or brains during processing was the likely cause).

Scientists can't say that CWD will actually cross over and infect humans, but as time goes on and more infected game meat is consumed, the likelihood grows, according to Osterholm.

CWD is no stranger to Colorado. We have the unfortunate distinction of being the first state to identify the disease in captive deer in the late 1960s and in wild deer in 1981, according to the CDC. It has spread to 24 states and two Canadian provinces as of January 2019. 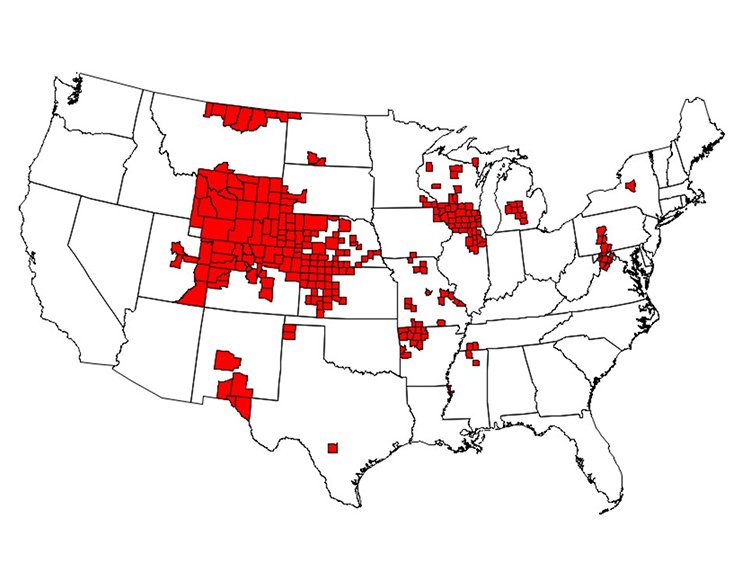 Counties reporting CWD in free-ranging deer, elk or moose. Courtesy of CDC, as of Jan. 2019.

Before you swear off hunting or enjoying an elk burger or two, it's important to note that there have been zero reported cases of CWD infection in people at this time. The concern revolves mainly around the fact that it has successfully transmitted to other species, including primates.

According to the CDC, "To date, there have been no reported cases of CWD infection in people. However, animal studies suggest CWD poses a risk to some types of non-human primates, like monkeys, that eat meat from CWD-infected animals or come in contact with brain or body fluids from infected deer or elk."

Eating CWD-infected meat would be the most likely way it would spread to humans. It is estimated that 7,000 to 15,000 animals infected with CWD are eaten each year, according to the Alliance for Public Wildlife. But, there are ways to avoid that and still enjoy that deer sausage.

The CDC recommends that hunters test deer before eating meat from affected areas. If a deer looks sick or acts strangely, hunters should not shoot or handle it or eat its meat. Testing is already required for deer harvested out of certain regions in Colorado and highly encouraged for all hunters. There are many other regulations nationwide aimed to prevent humans from eating infected meat. If you are a concerned consumer, ask your provider if the product they are offering is sourced from tested and non-infected animals.

Colorado Parks and Wildlife (CPW) offers the following advice, "Keep hunting! Hunting is the single most effective tool wildlife managers have to monitor and manage the spread of CWD. By submitting harvested animals for CWD sampling, Colorado’s hunters provide critical information about where and how CWD is impacting deer, elk, and moose herds in the state."

You can learn more about CWD in Colorado and the efforts CPW is taking to control it here.