Finally, the big, blue beast gets a little love ... kind of.

Many a person, whether a visitor or resident of Denver, has gazed upon DIA's veiny blue horse with blazing red eyes and simply wondered, 'Why?' Love it or hate it (you're my boy, Blue!), there's no doubt that Blucifer grabs attention, and now he gets a chance to unleash his inner Dr. Evil on the whole of Denver through the form of a mobile game.

The game helps us answer all the questions we've ever had about the blue one: Is it really evil (it did crush its maker, after all)? Is it a herald of the apocalypse? Is it a vessel for unspeakable evil? The answer to all those questions, according to game creator Ryan Seabury, is yes.

"Blucifer: The Doom Horse of Denver is a mobile game of unabashed, wanton destruction through our beloved "Mile High" city of Denver, Colorado. An extraordinary lightning storm awakens Blucifer, freeing him to rampage through the Mile High city, destroying everything in his path and consuming the souls of the innocent. How long will his trot of terror last?!" the game's site says.

Even our fair residents are not safe from the red-eyed equine.

"Blucifer consumes innocent mortals for Evil Power in his quest to open portals to the Endless Void, ushering in the annihilation of humanity."

Seabury's mobile game lets you play as Blucifer, destroying landmarks with his laser eyes in a post-apocalyptic Denver. You can wipe out Coors Field, the Molly Brown House, and yes, even everyone's favorite restaurant, Casa Bonita.

"Yes, Casa Bonita is in the game. Yes, you can destroy it, along with 30 notable landmarks while running through the actual streets of Denver," says the site. 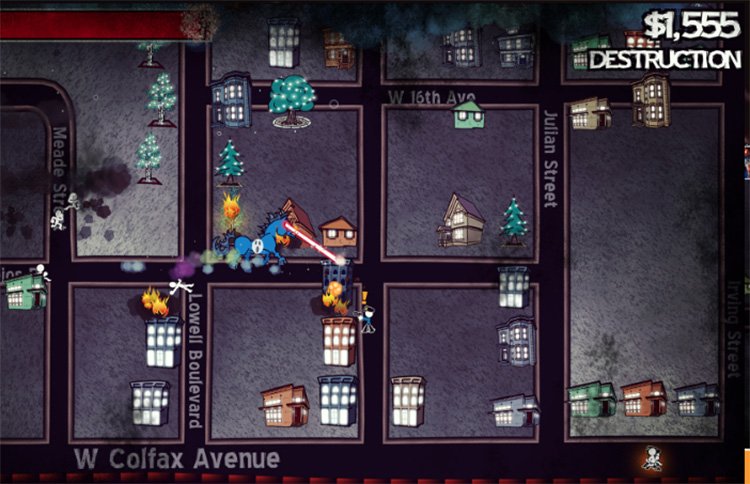 Just another Monday, destroying Denver. All images courtesy of blucifer.run.

But watch out, the Big Blue Bear that calls the Colorado Convention Center home is also on the prowl, and if Blucifer's rampage reaches epic proportions, the bear will step in and try to stop the destruction. It's a blue battle royale.

According to Seabury, while the game is just plain fun, it also has another goal: To teach users about Denver, its landmarks, and its navigation. He hand-illustrated all the major landmarks of the city, and included some of the city's housing styles, so users can see some of what Denver has to offer. And, then they can blow it all up, laser style.

In addition, once the game goes live, Seabury hopes to give a portion of the sales to DonorsChoose.org, providing school supplies to Denver's teachers.

Are you hot to trot to digitally destroy Denver? Hold your horse. You can't gallop over to the App Store just yet, as it's in its final stages of production, i.e., Seabury's kids are testing it for bugs. But, after working on it for five years, Blucifer is about to make his mobile debut.

The game will be offered on Amazon, Google Play, and iTunes app stores when it rolls out for about $2. You can learn more about the game and its release date at blucifer.run.

How to hibernate your way through January.

Visit Our Community Now's homepage to get the latest news on food & drink, lifestyle, and more!