Digital License Plates in Colorado? It Could Happen Sooner Than You Think.

Digital License Plates in Colorado? It Could Happen Sooner Than You Think.

Three states have authorized digital plate technology, and Colorado is included on the expansion list.

So, you’re parked on I-25’s usual rush hour traffic jam, and you get a hankering for pizza. Why? If there’s any truth to swirling rumors, the people stuck all around you could be advertising Dominoes through their cars’ license plates.

Far-fetched you say? Not anymore. Reviver Auto has designed and tested a brand-new, digital license plate that has already been approved in Arizona, California, and Michigan. In Arizona, the approval came on the heels of more than a year-long testing period to see how the plates would work.

The company has said that it plans to expand the pilot program to Colorado.

Its benefits are numerous, from efficiency to what the technology can actually do.

“We have completely reinvented the 125-year-old stamped metal license plate into a connected car platform that digitizes and can automate the costly, often frustrating, and time-consuming Department of Motor Vehicle (DMV) registration renewal process,” the company says on its website.

Digital plates have the potential to save a lot of money by eliminating paper mail and registration stickers. It also gives display space to a host of messages, including amber alerts, stolen cars, and pretty much anything you can think of. A plate could also be set up to pay tolls automatically, which would likely be welcome by our E-470 and Express Lane drivers. Geofencing and mileage tracking are also available, meaning you can’t fudge those mileage expense reports any longer. 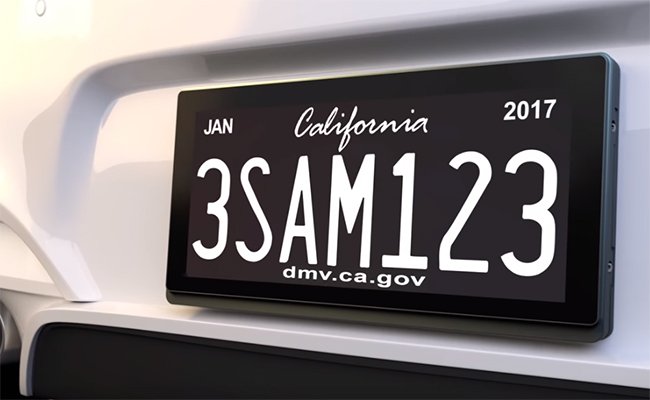 That also could mean advertisements on parked cars, which walks that thin line between benefit and inconvenience. Personally, if I am selling insurance through my car’s license plate (which I paid for), I better be getting a piece of that advertising revenue pie and a say over what wares my car is hocking.

There is also some concern over privacy and data with the new technology, specifically how safe is data connected to the plate and is it easy to hack into and steal. It also has the potential to reveal where you are at all times you are driving.

In addition, the cost might cause a few roadblocks for those wishing to try out the technology. Plates in the Arizona pilot started at about $499.

In response to the concerns, the company told NPR that the location feature can be turned off manually at a driver’s discretion, and any alerts would happen in quick, less-distracting flashes. It also says that information is not shared with DMVs, law enforcement, or other third parties and is held to the same standards as banks use on their online systems.

What do you think? Would you be one of the first to try out a digital license plate? Do you have concerns? Share your thoughts in the comments below.

This startup service is offering to preserve and upload your brain to the cloud ...