Traffic was backed up for 12 miles, prompting officials to waive tolls.

The first wave of closures on the Chesapeake Bay Bridge began last Friday night, and the result was bedlam. On Tuesday, Sept. 24, two-way operations on the westbound span were discontinued for the William Preston Lane Jr. Memorial Bridge project. Problems began to arise late morning on Friday, Sept. 27, when weekend travelers made their way toward the bridge. More delays are expected after another round of closures begins on Monday, Sept. 30.

Travelers heading to Ocean City for one last weekend in the sun were instead greeted by the gleam of brake lights. At one time traffic was backed up past the I-97 exit at Annapolis, over 12 miles from the bridge. A three-day weekend for some Maryland counties added to travel volumes. Officials from the Maryland State Highway Administration, Maryland State Police, Anne Arundel, and Maryland Transportation Authority (MDTA) were called in to deal with the backup. By late afternoon officials announced they were waiving tolls until traffic cleared up. 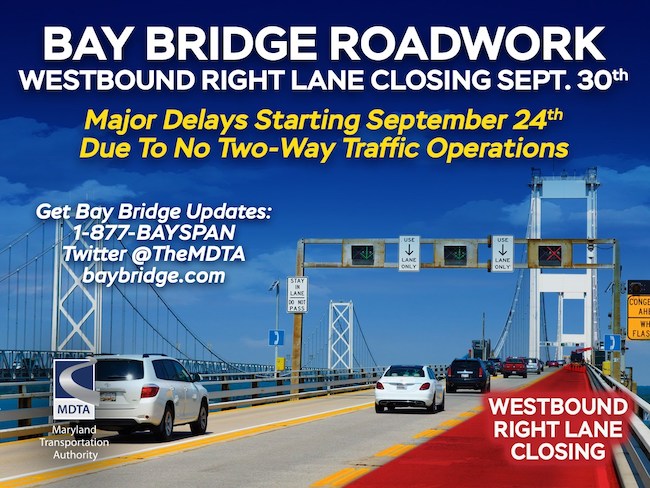 Beginning on Monday, Sept. 30, the westbound span of the bridge will be closed every night from 9 p.m. to 5 a.m. through April of next year. The only reprieve from the closures will be on Thanksgiving weekend.

After last Friday, Transportation Secretary and MDTA Chairman Pete K. Rahn tasked officials at the MDTA and the Maryland State Highway Administration to come up with a plan to avoid congestion during the two-year project.

Officials have decided that in the case of future backups, the MDTA will stop westbound traffic on the bridge while allowing three lanes of eastbound traffic to proceed until traffic clears. Even though traffic is lower in the winter season, travelers using the bridge should expect delays and plan ahead.

Did you get stuck in the bridge traffic last weekend? What was it like? Tell us in the comments!